A truly magical experience from the Magic Toilet!

And now to put ecosan to the test… (This is one story from a multi-part series on SOIL’s adventures in Africa.)

After our successful trial of exhuming beautiful compost from the Kalale school latrine on Wednesday, we had today the real test of our trip to Benin: to convince the women of the Bessassi garden community that they might want to create their own magic toilet, and use its compost (produced from their poop) in their own garden: No mean feat!

The omens for a successful and convincing sensibilisation session were not all good as the previous day’s sanitation survey in Bessassi, by Bobo and Sasha, was  not particularly encouraging. The sanitation survey basically meant walking through the village observing people and practices and chatting about subjects such as: Do you have a toilet and if not where do you poop?, How do people cleanse their bums?, What are the environmental effects of the current sanitation situation?, Where are the main water sources?, What are the attitudes toward pooping and toward toilets?, and How does behavior change according to season/gender/age/location? 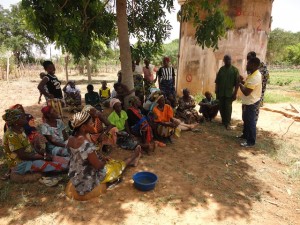 Bobo starts off the information session with a few questions.

In fact, textbook sanitation surveys involve a frightening array of checklists, guidelines and score sheets that are designed to help implement a sanitation project. But none of these can replace a good honest natter with a careful selection of friendly helpful locals. This is what Sasha & Bobo excel at after years of practice in Haiti, and with the help of our ADESCA colleague Ginin, they arrived at the following findings:

So we had a tough task ahead: to implement a toilet in a place where there were next to none and where the demand for toilets was apparently – nil.

I was not surprised: having experienced first-hand or read about many failed sanitation projects in rural Africa, I was skeptical about implementing one in Bessassi. Usually, sanitation projects follow a cycle like this: an NGO arrives in an area with a sum of X$ to build Y toilets in Z years; the NGO undertakes surveys and meetings and defines the project parameters; a demand (often only a perceived demand) is created based upon the link between sanitation and public health and sometimes also education and the economy; toilets (usually pit latrines) are built and monitored for a few months; the Y toilets are entered into the global MDGs (Millenium Development Goals) figures for providing global access to sanitation; and the NGO ticks its boxes and goes home. What usually happens next is that the latrines fill up, people go back to the bush, and life goes on. 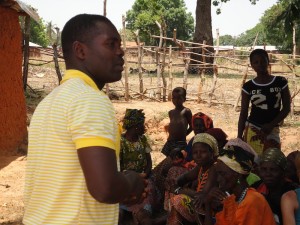 So my mood on Thursday evening, as I tried to motivate myself for today’s sensibilisation meeting, was less than positive. And I was not sure about how the rest of the trip would develop. But then, my experience did not extend to magic EcoSan toilets in rural Africa, and what I was about to witness, would blow my mind…

We arrived at Bessassi at 11:30, and started banging the village drums for the group to gather for the start of the meeting. As we waited for the women to gather under the mango tree in the community garden, we walked down to the river to observe riparian life. Women were washing clothes in the river, children were milling around posing for photos and vying for attention, and a baby crocodile (a mystical creature in Benin – always respected and never harmed) was lazing in the shallows, waiting for the fish. The river was almost beautiful, but for the large chunks of algae that were floating past all of these activities. Algae in rivers is caused by eutrophication; most likely caused by nutrient run-off (chemicals or human poop) from fields. “OK,” I thought to myself, “we can do something about this”. As the call came to start the meeting, a mango fell from the tree and landed near the baby crocodile which darted off into the bush. “Ah well,” I thought, “everybody poops”. 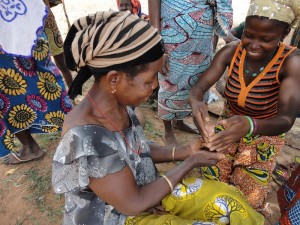 A crowd of thirty or so women had gathered under the shade of the mango tree at the top of the garden. I will never fail to be amazed at how beautiful and well-turned out women in rural Africa are: always smiling and welcoming, with brightly-colored cloth gleaming in the midday sun – I felt positively dull in my dirty white shirt and khaki hat. Luckily, Bobo – our educator extraordinaire – was on-hand to represent Haiti’s own colourful style in a very dapper mustard yellow shirt. As I set up the camera tripod and Sasha was handed a mango and settled down amongst the women, Bobo soon had the women chanting a beautiful Beninoise song; and the game was on…

I had seen Bobo animate the SOIL EcoSan message before in Haiti, and I had seen him educate groups of children and adults, community members and WASH (Water, Sanitation, Hygiene) professionals in a variety of training contexts. Therefore, having seen my colleague Bobo in action before, I must admit that I took his capability and his professionalism for granted. But seeing Bobo animate the crowd today, and seeing the women follow his lead as he explained to them what SOIL was doing, and what the Magic Toilet could do for them, gave me a renewed appreciation for this Master Animator, and a tremendous sense of pride in the fact that I could call him my colleague.

With the help of the local elected official translating, Bobo started off with a series of questions, slowly breaking the ice and developing the (eco)logic of the EcoSan approach: “What do you eat?” “What happens when you are full?” “Where do you poop?” “What do you use to fertilize your crops?” “How can you use the resources that are all around you?”

It was clear that the women had a keen sense of the need for something to boost the productivity of their soil, mostly they used cow manure or chemical fertilizer. However, they seemed nonplussed about the sanitation aspects of EcoSan, and ‘going’ in the bush was not a problem for them, though they did claim that the main barrier to not having local toilets was finance.

At this impasse, the traditional sanitation educators, or Hygiene Promoters, would bring out tools like the ‘F-diagram’, which powerfully demonstrates the Faecal-Oral route of pathogen transmission, or other educational tools to try and demonstrate the need for a toilet. But usually, changing perceptions and attitudes with regards hygiene and sanitation takes a very, very long time, and this is where many sanitation projects fall down.

Bobo however, had another trick up his sleeve, or rather, in his bag, as we had brought with us a bag of rich dark humanure compost from the Kalale latrine…

“Does anyone know what this is?” he said.  Women eagerly reached out their hands and began to pass around handfuls of compost. 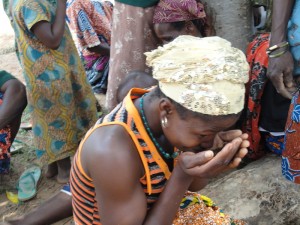 “Fumiere… Matiere Vaches… Kaka Bouef!”. Unanimously, the women replied that the black substance they were caressing in their fingers was cow manure.

“Would you use this in your garden?  Heads nodded approvingly all around.

Then there was the moment of truth when Bobo explained where it had in fact come from.  “We got this manure from a school in Kalale” he said, heads continued to nod less vigorously.

“From an old toilet” he said. Laughter ensued and women began to pass around a bowl of water for hand washing.

“OK” he said “if you use cow manure to make your crops grow taller and greener, then why not use humanure too?”

The silence was eventually broken by tutting, laughing, head-shaking, and general disapproval.

“Why not?” Bobo continued, “Cows poop. Humans poop. If cow poop is good for your crops, then why not human poop too?”

Sasha and Bobo try to convey their love for compost.

Had Bobo ‘mis-judged the room’?

Sasha (having finished the mango) jumped up and prompted Bobo to return to the EcoSan logic:

“What you were touching is earth, is soil” continued Bobo, opting now for some religious imagery: “Dust to dust, ashes to ashes. You come from the soil and you return to the soil. Everything is soil. The poop from Kalale was turned into soil by God, and now it is here to return to the soil in Bessassi”.

The exact steps that followed were hard to document in scientific fashion. But one-by-one, the hubbub subsided and the women who we thought we had shocked and lost, began to comprehend Bobo’s logic, and turned again to the small piles of humanure compost that they had collected at their feet:

“So, we can use this to grow food?” inquired one.

“This comes from us?” asked another.

“Yes, Yes! You have it!” cried Bobo “You can make this – right here in Bessassi – and you can have a toilet that will make this for you, and keep you from having to go in the bush”.

By the end of the meeting Bobo was shining like a poop-deity and answering  quick-fire questions from the entire group:

Within minutes we are all utterly transformed and smiling from ear to ear. We had started to achieve the most important part of our trip: to instill the passion in others that has driven Bobo and Sasha since SOIL’s beginnings in Haiti in 2006, to foster a belief in a technology that is transforming communities in Haiti and throughout the world, and to make a toilet a desirable sought-after necessity that can improve health for humans and for our environment. 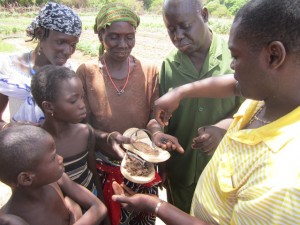 A woman fills one sandal with EcoSan compost to compare it to the sandal she's filled with soil.

As one woman removed her flip-flops and used them to proudly fill one with soil and one with compost to demonstrate the difference, we looked at each other and began to believe that what SOIL has achieved in Haiti can be achieved in Bessassi too. As the large group of colourfully dressed, proud African women walked out of the garden and began to plan their new toilet, Sasha played with some children next to another mango tree.

Check out the rest of the pictures from the sensibilisation session on SOIL’s Flickr page.

2 Replies to "A truly magical experience from the Magic Toilet!"