Since I wrote about the Port-au-Prince launch of SOIL’s EkoLakay service, things have been B-U-S-Y! With an initial goal of serving 50 families (and 500 by the end of 2016) the Port-au-Prince office has a lot of work to do to get off the ground.

We started with a community survey covering three of five neighborhoods in Ti Plas Kazo, a community adjacent to our Port-au-Prince office where we hope to start offering the EkoLakay service. The goal of the survey was to get a better idea of the demographic makeup of the community, learn about the availability and type of toilets that families already access, and gauge interest in the EkoLakay service. With six teams, each comprised of a SOIL employee accompanied by a college student living Ti Plas Kazo, we canvassed over two hundred families in five days! Here are some of our more interesting findings:

-The vast majority of the families, almost 90%, said they already have access to some kind of toilet (predominantly pour-flush toilets or traditional latrines), which was considerably higher than we anticipated. While this initially made us wonder if we were responding to perceived, not real, problems, we found that this group is actually a great target audience: they are already motivated to own and pay for some kind of household sanitation, yet they are largely dissatisfied with their current options and eager to find an alternative.

-Respondents cited health, safety, and privacy as the main reasons for wanting a toilet in their own home; these were themes we had already brainstormed for our marketing efforts, so it was great to confirm that we had a good understanding of what motivates our target customers. 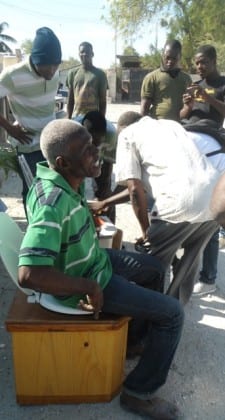 -After hearing a brief overview of EkoLakay, more than half of the respondents (113 families) indicated that they would be interested in paying for the service – more than double our target of 50 families!

During the survey, we also advertised two events: an Open House at our office and an EkoLakay marketing day in Ti Plas Kazo. The Open House gave survey respondents an opportunity to learn more about all of SOIL’s work, and we were pleased to welcome some of our office neighbors who were passing by as well. It was such a positive experience that we’re hoping to host an open house event every month from now on!

The EkoLakay marketing day was also a great success. We set up a stand at a main thoroughfare in Ti Plas Kazo, across from the soccer field. Between survey respondents arriving with their SOIL fliers in hand and a DJ playing hit songs and calling out to passersby, we attracted quite a crowd. With a chance to get details on the service and check out our selection of toilet models, we had nearly 40 people sign up for the service in just three hours! Even with some of our signups living outside of our launch zone, and the inevitable attrition that will come when it’s time to pay the first month service fee, this initial reaction has given us great confidence that we’ll be serving 50 customers in no time!

We look forward to sharing continued updates about the EkoLakay debut in Port-au-Prince. Be sure to follow us on Facebook and Twitter for more SOIL news. We are grateful to our individual donors, the Swedish Postcode Lottery, and American Red Cross for their support of this program.

3 Replies to "An EkoLakay Update!"