Amy Ross navigates the filthy, feces-strewn backstreets here in flip-flops and a miniskirt, bobbing along quite happily, giving the distinct impression that she’s either been in this city too long or not long enough.

Ross is a program manager for Sustainable Organic Integrated Livelihoods, or SOIL, a Haiti-based organization that specializes in toilets, or what the humanitarian community euphemistically refers to as “sanitation.” Ross’ good humor makes her an ideal candidate for this job, in which she is routinely talking about, or surrounded by … waste.

On this day, Ross is on her way to a camp, where community members have planned a small party to celebrate their “toilet inauguration.” It’s all part of SOIL’s efforts to promote local buy-in and education for their eco-friendly toilets and compost program. It’s an exceptionally hot day in Haiti and everyone is fading fast — except Ross, who insists, “The band is on their way!”

The January earthquake created a fast-growing sea of sewage here — and, in the streets, a minefield of makeshift solutions where no better ones exist. Seven months after the earthquake, sanitation remains a desperate need, with services dramatically below accepted humanitarian standards.

Led by founder and director Sasha Kramer, SOIL has managed to carve out a successful “green” niche in Haiti. The group’s toilets separate liquid and solid waste, which is then independently collected and converted to fertilizer.

But her efforts to deliver humane sanitation solutions — quickly — in a post-disaster environment demonstrate the conflicts and the fading lines here between humanitarian aid and development.

“A lot of these [ecological sanitation programs], they’re pretty management intensive,” notes Mark Henderson, the water and sanitation chief for UNICEF. “While SOIL might be doing something in certain places, to talk about bringing it to scale to a million people is kind of another matter.”

Organizations are conflicted about whether Haiti is still in an emergency phase. As the months progress, political and infrastructure challenges still encourage fast, temporary solutions over slower, more permanent ones.

“The main problem,” Henderson says, “is that the camps are supposed to be temporary. And the camps themselves are officially supposed to disappear.”

Since January, humanitarian organizations have built or installed 11,500 latrines, most of which are traditional portable bathrooms. Land tenure issues, as well as the urban environment, have prohibited other options. These facilities carry a high cost, both economically and for the environment.

Even in other urban disaster scenarios, he notes, no one has ever responded to an emergency of this scale in a country with zero wastewater-treatment facilities.

In the past, most homes in Haiti did not connect to a central sewage system. People generally dug pit latrines and either hired people to empty them or cemented over them after some time. The country has no safe dumping grounds for wastewater, and the few pipes that do exist empty to canals or the sea. 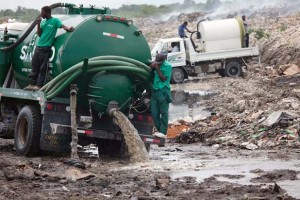 "In Port-au-Prince, Haiti, the city's only landfill, a site called Truitier, takes in 24,000 gallons of sewage a day. No wastewater-treatment facilities exist in the country." Emily Troutman for AOL News

Now thousands of latrines must be emptied every day, at a staggering cost of $10 to $20 per toilet. Two private Haitian companies — Jedco and Sanco — dominate the market here for toilet emptying, a process called “desludging.”

There are only a handful of desludging trucks in the country and only one place to empty them — Truitier, a waterfront landfill that was never intended for that use.

At Truitier, on the outskirts of Port-au-Prince, Jedco and Sanco trucks run all day, dumping sewage wherever it is fastest and most convenient for their drivers. Each day, the site is taking on 24,000 gallons of sewage.

Along the horizon, hundreds of people salvage trash, walking, working and sometimes living along acres of liquid waste. Since the earthquake, the site has become unrecognizable. A large hilltop sign indicates the dumping area for medical waste, which, tragically, has become a popular hangout.

Management of Truitier is run by the Ministry of Public Works, Transportation and Communication. Efforts to reform its use have been unsuccessful. Three months ago, World Vision, a charitable organization based in the U.S., took on a $650,000 emergency mitigation project funded by the U.N. and the government of Canada, which aimed to create three settlement ponds for the sewage.

World Vision’s initial goal was to dig in the trash one big hole and two shallower holes that could slowly filter and decompose the waste. However, as soon as the organization’s workers began digging, a combination of contaminated groundwater and seawater filled the hole.

In theory, the temporary solution might someday work, but for now, the government has asked World Vision to stop. The National Drinking Water and Sanitation agency has discouraged any further liquid waste disposal at Truitier. The agency is pushing to develop a parcel of land in the suburb of Titanyen, and though funding exists, negotiations have not moved forward. The sanitation agency’s officials declined to comment for this article.

Shepherd-Barron, like other key players, is resigned. “One big hole is better than no hole at all,” he says. 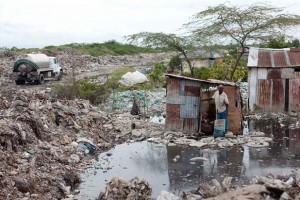 "A resident of Truitier, the only landfill in Port-au-Prince, Haiti, struggles to live and work alongside the growing problem of raw sewage at the site." Emily Troutman for AOL News

For SOIL’s Kramer, who has worked on sanitation in Haiti since 2004, the situation sounds all too familiar. Her composting program is successful, in part, because it is not reliant on the dream of large-scale development.

“When I first got into this, I’ll admit, I was one of those people who was like completely pro-ecosan and anti-water,” Kramer says. “But now, there’s no question in my mind that water-based [piped] systems will always be the cheapest way to move sewage. The question is whether or not that will ever happen in Haiti.”

While her composting program is still small, it is gaining wider interest. SOIL’s current project, with about 150 toilets, is funded by Oxfam, an international confederation of poverty organizations.

“Right now,” Henderson says, “we’re busy just trying to keep up and firefight. But in our planning we’re including these things. There’s been very little innovative sanitation stuff in the past in Haiti, and I think [nongovernmental organizations] are appreciating that this is a good opportunity to try something new.”

No Replies to "AOL News: Sanitation Efforts Target Sea of Sewage in Haiti"