As all of our friends and supporters know, SOIL has been working to improve access to safe, dignified sanitation in Haiti since 2006. But you may not know that from time to time, SOIL also lends a hand with Ecological Sanitation (EcoSan) projects around the globe. Recently, SOIL’s Port-au-Prince Regional Director, Baudeler “Bobo” Magloire, returned to the West African country of Benin to follow up on a project launched way back in 2012 in partnership with the Solar Electric Light Fund (SELF) and their local partner, ADESCA. This project was funded through a National Geographic Blackstone Innovation Challenge grant. 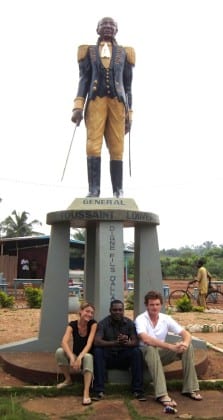 While many of you are old friends of SOIL and will remember that first journey to Benin (and Bobo’s epic struggle to survive malaria and get back to Haiti), here’s a bit of background for our newer supporters:

For several years, ADESCA had been working with women’s groups in rural Benin to pioneer solar-powered drip irrigation systems in their local gardens, and they wanted SOIL’s help in teaching the women how human waste, transformed into compost, could help improve the productivity of their gardens while also increasing access to sanitation. During that first visit, Bobo led a series of basic training sessions for the women and with the help of other SOIL team members brainstormed plans for the first EcoSan toilet with SELF’s engineer. This toilet was built soon after the SOIL team left Benin and went into service in July 2012.

For the past three years, ADESCA and SOIL have kept in contact while the villages built 19 communal double-vault toilets. In early 2015, SELF and SOIL began making plans for Bobo to return to Benin to complete a technical and social evaluation of the project, do some additional training, and help evaluate some new sites for additional EcoSan Toilets.

Bobo’s first stop was the village of Angaradebou (pictured above), a village that the SOIL team had not visited back in 2012, but where ADESCA had led trainings and constructed toilets earlier this year. He arrived to the same warm welcome the SOIL team had enjoyed in other villages, with a group of women singing traditional songs. As he did in 2012, Bobo began the meeting with an explanation of the close relationship between Benin and Haiti (many Haitians are of Beninoise descent due to the slave trade routes in the seventeenth and eighteenth centuries, including Haiti’s most well-known founding father, Toussaint L’Ouverture). Bobo then toured their toilets and talked to the group to understand what they had already learned about ecological sanitation. 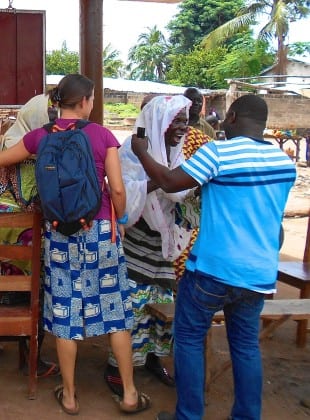 Bobo (right) receives an enthusiastic welcome from a leader of the women’s committee of Dunkassa.

He next visited the village of Dunkassa, where the women’s committee is eagerly awaiting the construction of a public toilet in the small business center – part café, part photo studio, part electricity recharging station – that SELF has helped create within the village. Finally, Bobo returned to Bessassi, where he conducted the original training in 2012 and ADESCA subsequently built its first toilet. Many of the women remembered Bobo and were happy to welcome him back! They were especially appreciative of the refresher EcoSan course that Bobo provided, peppering him with questions about cover material and proper usage of the toilets. Bobo’s visit to Benin concluded with a training for the ADESCA staff to augment their EcoSan knowledge, specifically focusing on vault-emptying plans and appropriate re-use of the material.

With all the data Bobo collected, SOIL is preparing an evaluation of the project, along with a few recommendations in the hopes that the SELF/ADESCA program will continue to promote responsible ecological sanitation practices alongside their solar gardens in the communities of northern Benin.

We hope to be able to welcome visitors from Benin to Haiti in the coming years and are already hoping that Bobo will get back to Benin, this time to eat the fruit grown with the help of nutrients from the ADESCA toilets!

No Replies to "Back to Benin"