There’s no escaping the fact that Cité Soleil has a reputation. Poor. Dirty. Violent. Googling the name turns up headlines like “The Most Dangerous Place on Earth” relating stories of horrifying gang violence during the 2004 coup that deposed President Aristide.

The residents of Cité Soleil know all too well how they are viewed. “People think 75% of Cité Soleil is full of bad, violent people – that only 25% percent of the people here are good and care about their community,” says Michel Wilgimpson, a resident of Cité Soleil. Wilgimpson is one of the organizers of the Fwa LaDiferans, an annual fair launched in 2010 by a team of community organizations: “We want to show that it is the other way around.”

Now in its fourth year, the fair is doing just that. Ti Marchans and organizations showcase local agriculture and handcrafts, and a stage at the center of the fair showcases musical and dance performances, as well as informational presentations by community health workers and other fair participants. 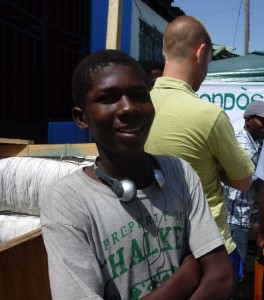 SOIL was honored to be invited for the first time to participate in this summer’s fair, held last weekend. Several employees manned a table demonstrating ecological sanitation, showing off SOIL’s household toilet, compost, and plants. I met sixteen year-old Yves Valcourt as he was checking out a few of the plants displayed at the SOIL table, though he quickly assured me that he was already very familiar with what we do. “I’ve used your toilets at Sakala, so I know that you make natural fertilizer with the waste from the toilets!”

SOIL also provided four of our EkoMobil portable toilets for fair-goers to use. While I’ve written before on the many advantages of SOIL’s EkoMobil toilets, I’m happy to say that I can now personally vouch for their superiority over standard port-a-potties. (Even after two days of sitting in 100+ degree temperatures, the EkoMobil toilets were clean and pleasant!)

The fair was a great success, and SOIL was glad to be part of such an important event. As Yves said, “I’m proud that we do this every year. It brings people from other neighborhoods so they see that beautiful things can come from Citè Soleil, too.” 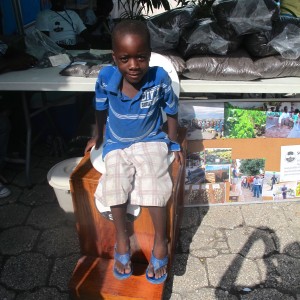 No Replies to "Beautiful Things"