Behind the Scenes Look at SOIL Operations in Cap-Haitien

Theo Huitema, SOIL’s Cap-Haitien Regional Director, met me at the airport. After coffee and a bite to eat at the office, located downtown not far from the waterfront, I went out with Monika Roy, a Program Coordinator whose specialties are environmental economics and sustainable agriculture, to have a look at the SOIL farm in Limonade and the SOIL composting site in Mouchinette, just outside of Cap-Haitien. The farm, where Theo lives in a converted former compost bin, has seen a few changes since I visited a year ago. (See SOIL, Haiti, July, 2012 at http://www.vichinterlang.com). There’s now an entire field filled with zaman (almond), zabriko (apricot), kakawo (cacao), zaboka (avocado), gwayav (guava), and kanel (cinnamon) trees, among others, and a large experimental peanut field. SOIL is testing the rate of growth of the peanuts with and without compost, looking at overall yields. The results have so far been as expected, with the composted plants far outstripping their deprived neighbors. And in another development, SOIL has added several additional fish tanks stocked with tilapia fed with compost. 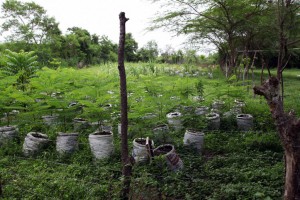 The SOIL composting site in Mouchinette has also changed. There are now six composting bins as opposed to the three of a year ago. As we arrived, a couple of local SOIL employees were shoveling compost into bags while another sifted bagasse on a wood-framed metal sieve about five feet long by four wide. Also while we were there, Job Etienne the Agricultural Supervisor at the SOIL farm and compost sites, took compost samples to test for pathogen indicators (E. coli). This is a routine task meant to insure that harmful bacteria that exist in human waste being composted are killed in the first stage of the composting process, before the first turning.

From the composting site, we returned to the office for lunch and, for me, a bit of a break while Theo attended meetings. Later that afternoon, his meetings completed, Theo and I headed over to the Shada neighborhood to check out the household toilet bucket exchange. In the past year, the household toilet situation in Shada has gone from a pilot project with just a few families to a system that now services 130 families. 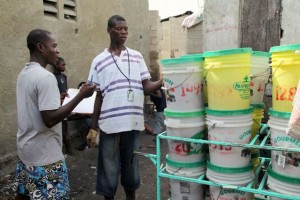 Jocelyn and Benick at work in Shada.

Once there, we met up with Jocelyn Cadet and Benick Nordeus, who were doing the bucket run. For the next hour or so, Theo, Madame Bwa, a community activist and SOIL public toilet manager in Shada, and I followed Jocelyn as he pushed his cart of 20 five gallon buckets through Shada’s narrow streets and alleys, exchanging empty buckets for full ones while Benick kept track of them in a notebook. Once Jocelyn had a full load, he deposited the buckets at one of the public toilets and reloaded his cart with empty ones.

Residents are supposed to pay 200 gourdes (about $5) a month for the household toilet service, slightly more than in Port-au-Prince, although because the service began as a free pilot project, SOIL is easing into the collection process. Ultimately, the 200 gourdes price is expected to cover the full cost of waste collection and toilet maintenance, laying the groundwork for social sanitation businesses to replicate the service around the country.

I spent my last morning in Okap (as Cap-Haitien is known in Creole) at the farm in Limonade observing Josaphat Augustin (SOIL’s Construction Coordinator) and SOIL employee Bos Ewod construct a formed concrete household toilet. Generally, the toilets have been a plywood box large enough to accommodate a five-gallon bucket, but SOIL is now experimenting with formed concrete toilets that have the advantage of being the shape of a traditional flush toilet, with enhanced durability, at a lower cost. (See post Haitian SOIL, February, 2011 for more on household toilets). In either case, the top of the toilet is a board with a hole cut in it. A molded polyurethane urine diverter is attached to the front of the hole in the board and a toilet seat is screwed onto the top. Josaphat and Monika demonstrated the molding of a urine diverter for me (See SOIL Toilet Construction, Cap-Haitien, June, 2013 at www.vichinterlang.com). 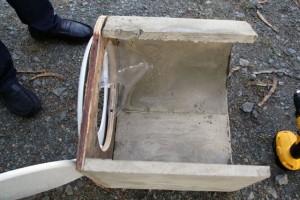 The equipment used to make the urine diverter is very simple, yet extremely efficient. A lidless aluminum foil-lined wooden box contains a hotplate. An appropriately sized wooden frame holds a thin sheet of polyurethane. The frame is placed on top of the box, the hot plate is fired up and, as the heat in the box builds, the polyurethane softens. When the polyurethane is sufficiently malleable, the frame is removed from the top of the box and the polyurethane is pressed down over a nearby plaster mold. The urine diverter is then removed from the frame and cut to fit the shape of the household toilet.

With its developments in the household toilet program, SOIL continues to advance toward its goal of providing not only dignified sanitation services, but also livelihoods for the people using those services. Although a great deal remains to be done, the progress I’ve witnessed over the past year augurs well for the future.