Black Looks: Toilets are a human right: From poo to compost in 6 months

I met Sasha Kramer the co-founder of SOIL [Sustainable Organic Integrated Livelihoods] one Sunday afternoon at a Haitian family wedding party high up on the top of a hill in Pernier district of Port-au-Prince. About 20 of us piled into the flat bed truck and drove up and up at some points the road was so steep and so full of rocks and holes I feared those in the back would fall off. Sasha and her colleague Nick who were already there and later Nick would give a “best man” speech in fluent Kreyol which was pretty impressive. As in most Haitian gatherings there was a great deal of singing – I always wonder why hymns always sound so much better when sung in one of the many African languages or in Black churches! This is a whole other story so I will leave it aside for now.

Sasha arrived in Haiti in 2004 working for a Human Rights organisation. Two years later she and her friend Sarah Brownell founded SOIL and started putting up toilets in Cap Haitian in the north of the country. We think about the right to food, water and shelter but most often forget the sanitation – what goes in must come out – there is no way to avoid it. And Haiti along with water supplies desperately needs a sanitation system starting with collection of market waste which following SOIL’s vision could be turned into compost for farmers.

After the earthquake Sasha came down to Port-au-Prince to help out and met Rea Dol and began helping out with the emergency food distribution along with Rea’s family, friends and neighbours. Everyone worked day and night buying food, packaging it into plastic bags and distributing to anyone in need. Shortly after the earthquake SOIL were approached by Oxfam and asked to build 200 toilets in the camps across the city. There were moments of panic as they did not feel they were ready but recognising the desperate need managed to gather together a team in PAP and began building the toilets. 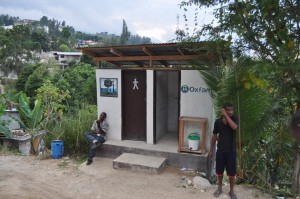 The philosophy behind SOIL which they describe as ”liberation ecology” is dedicated to protecting soil resources, empowering communities and transforming wastes into resources in Haiti. We believe that the path to sustainability is through transformation, of both disempowered people and discarded materials, turning apathy and pollution into valuable resources. SOIL promotes integrated approaches to the problems of poverty, poor public health, agricultural productivity, and environmental destruction. We attempt to nurture collective creativity through developing collaborative relationships between community organizations in Haiti and academics and activists internationally Empowering communities, building the soil, nourishing the grassroots.

Toilets too are a human right.

The toilets are pretty cool – much needed in Haiti and we could do with some in Nigeria, other parts of the global south and rural areas everywhere. There had been some problems with the one in the school – getting the kids to put the loo paper in a separate bucket rather than the toilet was frustrating but then with no running water, having to buy water and carry buckets to flush the toilet the compost still remained a better option.

The toilets are based on a compost system starting with the poo and ending up with fertilizer for growing food. First the toilet which consists of two compartments, one for urine and the other for poo placed exactly where you would sit or stand up.

Next to the toilet is a bucket full of wood shavings and one for the toilet paper. After use, you take a handful of shavings and sprinkle over the poo. This continues until the barrel is full. Instructions on how to use the loo are written on the door.

It is then removed through a side door, sealed and left for 6 months while it ferments nicely towards becoming compost and used to fertilizer gardens and farms. Eventually the hope is that a complete “waste collection and transport system” will be built including a treatment plant using garden and market waste, tested to meet standards and sold at a low cost to farmers across the country.

The one I used which was near a small church and presumably used by visitors was extremely clean with absolutely no smell, no bugs, nothing and outside was a tap to wash your hands, though to be on the safe side in the time of cholera people should try and use a sanitizer as well.

PS: If you are thinking about an organisation to donate to in Haiti then SOIL is one to consider – will write more on a a couple of other transformational actions taking place.

No Replies to "Black Looks: Toilets are a human right: From poo to compost in 6 months"