To our dear friends and supporters,

We are in awe of the outpouring of support that we have received from people around the world who have been holding Bobo in their hearts over the past week.  It is now midnight in Benin but I wanted to take a moment to update everyone on this ever evolving nightmare.

First the good news, and it is very good…Bobo was released from the hospital today and is now resting at a lovely German guesthouse.  His platelet levels are still low and he will be taking medication for the next few weeks to ensre that the parasites are completely out of his system.  Bobo was diagnosed with falciporum malaria with a parasire count of 12,000 parasites per mm3.  His doctor said before releasing him today that if he had spent one more day without treatment they would likely have been unable to save his life.  They said “if you are someone who goes to church, keep going, if not, start now”. 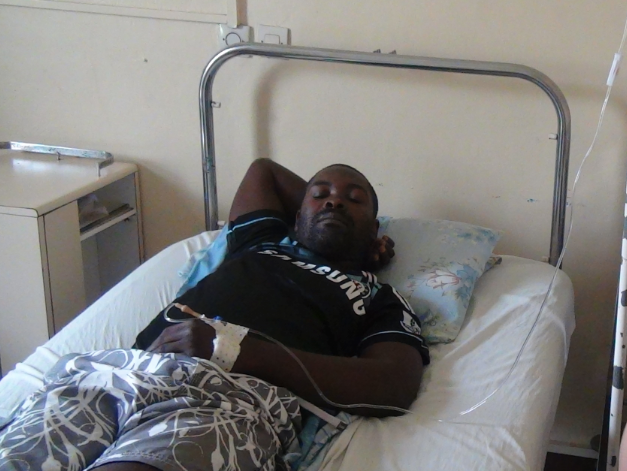 Bobo in the hospital.

But despite being a bit weak and discouraged, he looks much better than he did 2 days ago and he is now eating again after 6 days without food.  We are so glad to have him almost back to his old self and so very grateful for all of the love and support that has been sent his way.

In other good news a dear friend of SOIL worked all afternoon going from bank to bank to get us a much needed cash trasnfer which will be used to cover Bobo’s medical expenses.  He is our guardian angel and his generosity truly lifted our deflated spirits.

Finally on the good news front, I went to the US Embassy this morning as a last resort and they informed me that there is indeed a Haitian Ambassador here in Benin, in fact his office was tucked away just blocks from our hotel.  I visited him this morning and nearly cried when he received me with the melodious sound of the Kreyol language and genuine concern for Bobo.  He called Bobo immediately  in the hospital and promised to invite him to a dinner of griyo and banan pese upon his release.

The reason for visiting the ambassador you may ask…as it would seem that we are out of the woods.  Well now it is time for the bad news of this never ending rollercoaster.  Although Bobo is out of the hospital his journey back to Haiti is in no way ensured.  Once we had time to take a breather following his acute medical crisis, we took a look at his passport and realized that there is a strange stamp in there from the airport in madrid.  It appears that it is an entry stamp into Spain (though he never actually entered the country) with a cross through it and the letter “c” in parentheses.  We are very concerned that this stamp may cause him further problems when he once again tries to pass through Madrid (on his 3rd attempt to get home).  Any immigration issues could cause him to miss his ongoing flight, or worse to be returned to Benin for a 3rd time.

“I think the problem is that Haiti nationals need a visa to go through Spain. He did not have a visa so they sent him back. He needs to get in touch with our Consulate in Casablanca or change his itinerary so he does not flight through Spain.”

However we now this not to be the case as he transited through Spain with no issues on his way to Benin and we were assured by the Spanish Consulate in haiti that he would not need a visa if he did not leave the airport. So we wrote again with this information and received the following response:

“If he does not need a visa for transit I don´t really know why they put that stamp in his passport. He should probably go to our Consulate in Casablanca and try to solve the problem there. There is nothing I can do from here.”

So back to square one.  This morning after visiting the Haitian Ambassador he suggested that we contact the Honorary Spanish Consul here in Cotonou.  Anthony went to his office and was told that they have nothing to do with visa issues.  The honorary consul did not even look at the stamp and they said we would have to work this out with the French Embassy.Unfortunately when Anthony arrived at the French Embassy he was told that they closed at noon and would not be back until Tuesday morning, several hours after the flight we hoped to get Bobo on would be leaving.  Which puts us at a Thursday departure at the earliest, nearly a full 3 weeks after Bobo’s intended departure date.

We are now making this photo from his passport public in the hopes that someone with ties to Spanish immigration will be able to offer us some advice on how to proceed.  We do not want to spend thousands of dollars on Bobo’s tickets only to have him returned again, exhausted and traumatized. 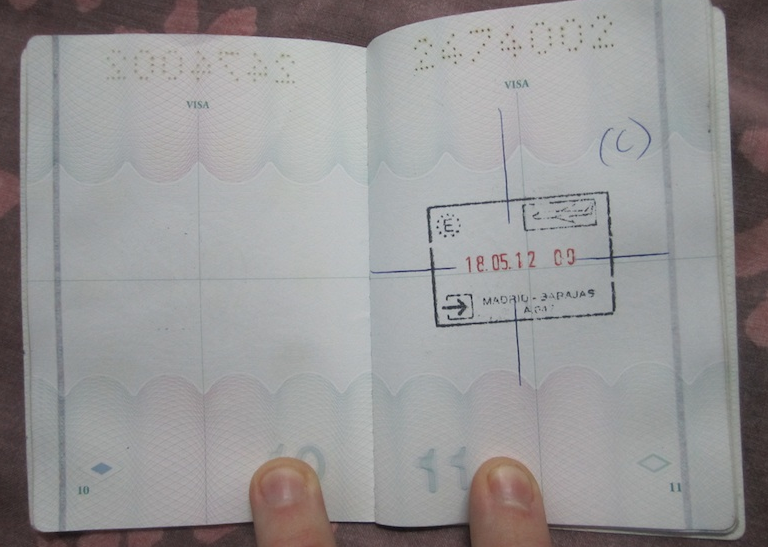 Can anyone help us identify this mysterious stamp in Bobo's passport?

Once again this experience has illuminated for us the injustice experienced by those travelling on passports without a European or American origin. The freedom to travel is something that many of us who will read this blog take for granted.  We would all do well to remember how lucky we are and the very different reality faced by the majority of the world’s citizens.

Please do let us know if you have any helpful leads and stay tuned for more updates.

With love from Cotonou Benin,