Building an International Commode for Peace

This month I had the joyful experience of participating in a program called Southwest Studies with six students from Syria, Austria, Canada, Italy, Barbados and the U.S. at my alma mater, United World College.

United World College (UWC) is a two-year international boarding school that has locations around the globe. Their mission is to make education a force to unite people, nations, and cultures for peace and a sustainable future. Ben Gillock, the school’s Environmental Systems and Societies teacher and the founder of the UWC Agroecology Research Center, invited me to join his Southwest Studies to share SOIL’s philosophy, values, and EcoSan expertise. 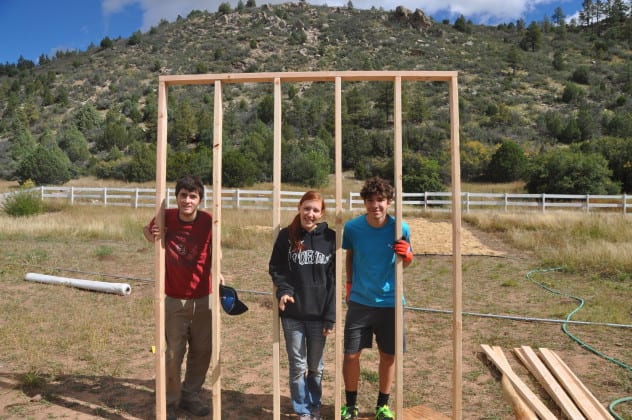 Joseph (Syria), Michelle (Austria), and Giaime (Italy), with one of the walls that will house an EcoSan commode!

I was excited to connect SOIL to UWC because I remember that as a student there, I was so eager to learn about mission-driven work. Especially after taking Ben’s environmental class, I knew that I wanted to make an impact that is both socially and ecologically responsible.

I started out the week of Southwest Studies by giving two presentations about SOIL’s work that were open to any of the 200 students that attend UWC. The students had many insights and questions. A girl from China said that for her, the idea of using “night soil,” which is human waste added directly to agricultural fields without composting, was something normal where she grew up. Other students said that they were accustomed to using squat toilets with water instead of toilet paper, and many had been using flush toilets their whole life. This kind of constant cross-cultural sharing is the core of UWC learning and serves to broaden students’ perspectives and foster compassionate understanding.

The students wanted to know everything from SOIL’s financial workings to the nitty gritty of the composting process—How does one pay for a project like this and is SOIL’s social business model developing as expected? What kind of carbon material can work to compost human waste? Can you add kitchen waste to the compost as well? Of course they also asked the questions that I would have asked—How did you find out about SOIL and how was the organization started? I knew that like me six years ago, they were drawing mental maps to figure out how to get from point A, boarding school, to point B, saving the world.

UWC students show off their new compost bins at the Agroecology Research Center!

It was inspiring to be reminded of how eager UWC students are to make a difference, and it also reminded me of how far I’ve come in my quest to do good in the world. I encouraged them to think beyond good intentions, and reminded the group that there are so many organizations in Haiti that have failed despite wanting to do good. I think that what makes SOIL different is very closely tied to the core values of UWC’s Agroecology Research Center. In both cases, cultural understanding is never separated from forming stronger relationships with the land that we live on and its resources. Ecological Sanitation is a wonderfully simple and low-cost technology that saves water and creates a resource (compost!), but technologies are only implemented successfully when they are locally supported.

The highlight of Southwest Studies for me was constructing an EcoSan system for people to use at the Agroecolgy Research Center. They currently have a porta-potty set up, but as everyone knows, those are expensive, smelly, and environmentally harmful. We completed a set of six compost bins for both human and kitchen waste, along with the skeleton of a room for a dry toilet. With my guidance, the students caught on quickly and produced the majority of the design and construction. They will start using this EcoSan system on a small scale at first and hopefully scale up once they can see the benefits of the compost!

UWC is a school that is educating the next generation of change makers. I’m hoping that our time together planted seeds in their minds so that one day soon we will see more projects like SOIL! Huge thanks to both SOIL, Ben, and United World College for supporting this Southwest Studies!

No Replies to "Building an International Commode for Peace"