A cholera epidemic began in Haiti in October 2010 and continues to sicken and kill people through the country to this day. How did this happen and what can be done to stop it?

One of the Largest Outbreaks in Modern History

Cholera is an acute diarrheal infection caused by the ingestion of food or water contaminated with the bacterium vibrio cholerae. Although cholera is an easily treatable disease, rapid access to treatment is essential as people can die within hours if it’s left untreated.

Cholera did not exist in Haiti before 2010. Shortly after the earthquake, the United Nations brought in a group of peacekeepers from Nepal—where cholera is endemic—and set them up in a camp near Mirebalais. Untreated and contaminated sewage from the camp was discharged into a tributary of the Artibonite river, a water source for an entire region. The result was one of the largest epidemics of cholera in modern history. Since then, upwards of 10,000 people have died and nearly one million were sickened from the disease. And while much has been done to control the disease and limit its spread, cholera still lingers in Haiti eight years later, flaring up during each rainy season.

In December 2016, after six years of incredible advocacy from the Institute for Justice and Democracy in Haiti (IJDH), Bureau des Avocats Internationaux (BAI), and a robust grassroots movement, the United Nations finally issued a public apology for its role in the epidemic. At that time, the UN also established a fund for cholera eradication and victim redress, though to this date just five percent of the pledged $400 million has been committed.

On a large scale, UN member states and other funding agencies need to be driving more funding to cholera prevention, eradication, and redress for victims. What needs to be done to prevent and eradicate cholera is well known, and there are plans in place that could be rapidly implemented if the necessary funding was delivered.

Eliminating cholera is going to take a combined, integrated approach including:

How SOIL is Tackling Cholera’s Spread 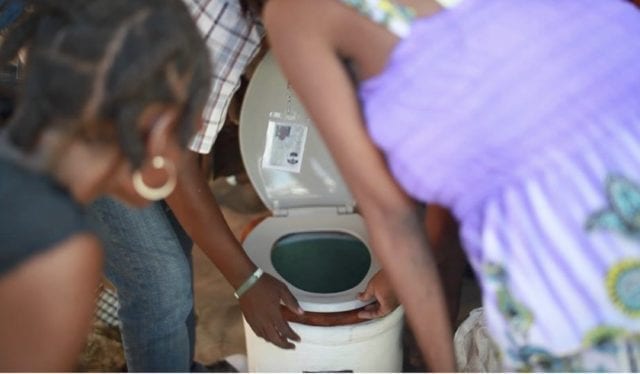 SOIL is providing sanitation services to people living in Haiti’s two largest cities, Cap-Haitien and Port-au-Prince. Our public toilets in the Shada neighborhood of Cap-Haitien, are providing access to over 2,700 people living in a community that would have otherwise been very vulnerable to cholera without SOIL’s presence. An additional 6,400 people are accessing an in-home toilet through our growing EkoLakay service and thousands more people each month use SOIL’s portable toilets, EkoMobil.

We’ve worked with the US Center for Disease Control and Prevention and others to determine that in addition to providing safe access to a toilet, we’re safely collecting and treating 100% of the waste from every single toilet to ensure the successful elimination of cholera and other disease-causing pathogens.

Our ultimate vision is to create a financially sustainable, affordable, and dignified solution that can ensure the sustainable delivery of sanitation, and while we work on direct implementation we are simultaneously dedicated to the innovation, business model developments, and government relations work that we believe will help us achieve this goal.

We do occasionally take a moment to celebrate that SOIL is already providing sanitation to thousands of people that would otherwise not have access, creating hundreds of tons of compost every year, and employing over 70 people in urban Haiti, but mostly we just run full speed at our larger vision that together we can create a sustainable, earth-restoring sanitation service that will ensure that one day every person has access to a toilet in their home and children are no longer dying from cholera and other preventable water-borne illnesses. Thank you for joining us in this effort.

SOIL depends on individual donations from people like you to fund our work in Haiti. Please consider supporting SOIL today.