Dr. John Kilbride, a dear SOIL friend (and the esteemed brother-in-law of SOIL co-founder Sasha Kramer), embarks July 23 upon a 2-wheeled odyssey of federal proportions; pedaling from Santa Monica pier in LA, to Battery Park in NYC. He will be spreading the word about SOIL and our ten year anniversary to all he meets! Our grand adventuring friend is inviting all of you to join him on his journey – whether you want to pedal along for a few miles, provide water/toilet breaks along the road, or a vehicle escort through tricky urban areas (we’re looking at you, New Jersey/NYC friends!). If you’re interested in joining or helping John during his trip, please email [email protected] and we can get you all set up.

And if you are especially inspired by John please consider sponsoring a few miles of John’s voyage across America. DONATE HERE to show John the love!

And scroll down to follow the adventure blow by blow!

Making Friends Along the Way:

John has made it all the way to Chicago! Looking out over the waters of Lake Michigan (Or, as John calls it “Lake Eerie, maybe”) is the perfect spot to reflect on the kindness of so many strangers who have become friends by offering rides, working tire pumps, friendly chats, or birthday wishes for SOIL. Check out a whole host of mini-updates below from some of John’s (and SOIL’s) new friends, including a fellow cross-country traveler, heading in the opposite direction on foot!

(To learn more about Brett’s journey, visit his blog here.)

Tire troubles have followed John all the way into the American Heartland – here he is a bit stuck in Kansas with another pesky tire problem. Luckily John is unwavering in his good cheer and hearty spirit – and he was especially buoyed upon receiving the news of Sasha’s Ashoka Fellowship! And it never hurts to make a friend or two on the road….John met the fellow in the quick mini-video (2nd down) and tried to help him find the party he was searching for. They never did find it, but they had a jolly good time regardless. We’re cheering John on from all corners, but also wanted to put out a call to any Midwest-based SOILies who could offer John a bit of support, whether through bike parts, pints of beer, or just a friendly wave and a chat. Let us know by emailing [email protected] if you’re in the area and can meet up with John. Or help keep John’s spirits buoyed by chipping in towards his fundraiser! He’s already exceeded his target goal, but nothing warms the heart like plowing past the finish line, whether on a bike or in dollars raised. Cheers!

Some tire troubles plagued John through the hills of Utah and into Colorado, but upon arrival in the Mesa Verde RV Park he found a great conciliatory activity – people watching! Check out his SOIL “bivvy” and hear his impressions in this lovely video update.

After a lovely day of rest in Flagstaff while the bike was being fixed, John set off again this morning on Route 66 headed to the Mokee Motel in Bluff, Utah (and Utah folks want to welcome him with a surprise party). In this video John waxes philosophical about larger than life logger statues and the value of pickaxes for ongoing road maintenance.

Well day 4 involved some backtracking to Barstow as predicted to try to undo the damage Route 66 did to the bike. While it is in slightly better shape after a day at the bike hospital it will need some more TLC but John made the very wise decision to get out of the desert and onto higher (and cooler ground) before pursing further bike repairs. After  a day of temperatures which soared to nearly 119 F, John hopped a train from Barstow to Flagstaff with the injured bike tucked safely away beneath the train. He woke up this morning in the high desert to the welcome site of trees! Stay tuned to hear where his next leg of the adventure will take him.

“The thing about Route 66 is that it is not a road really” – bike broken down in Ludlow California after walking it for miles along the pockmarked Route 66. Undeterred, John (now solo) will head back to Barstow (-52 miles) to fix his bike before moving on.

As luck would have it our favorite cross country travellers struck another obstacle. As they headed up into the mountains above LA they disappeared into the smoke of the season’s first wildfire. Amid radio announcements asking children and the elderly to stay inside – Anthony and John rode up the mountain towards the blaze. Now that’s committment! 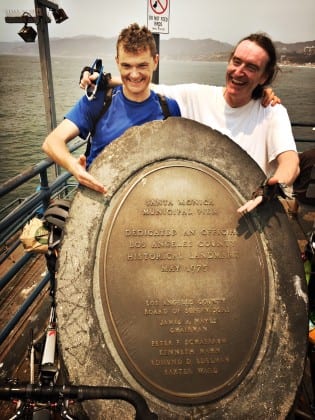 At high noon on a summer day in Southern California our intrepid bikers set out from the Santa Monica Pier, New York City bound (at least one of them). Sadly it was just not going to be possible to ride the bikes from the end of the pier through the Saturday crowds of tourists, so John and Anthony walked their bikes in time to the tunes of “Rock and Roll Jesus” until they got to the end of the pier. Then it was off and away (many of us would never have made it up the first hill!).

First update from the ground. John landed in Portland Oregon after a grueling flight through Reykjavik with his extra oversized bike box (lovingly packed up with all of the couch cushions by his parents). Given the extra size and weight from the cushions there had to be some readjustments along the way and sadly some cushions may have stayed behind in Reykjavik.

Upon arriving in Portland it was discovered that the bike box was indeed too large for the car that had come to collect him, so the bike got a few nights of luxury in storage at the Portland Airport while John headed into town to make his final preparations.

But – it would not be so easy. One bag – the most important bag with all of John’s biking gear and contact lenses – did not arrive in time and was sent by the airline to the hosue John was staying at 3 am that night. By 6 am the bag had disappeared from the porch – dragged off by a sporty poodle, scooped up by the early morning garbage truck, pinched by a short sighted jogger in need of biking shorts? We may never know. But in the end the bag was gone and instead of a day of carb loading and relaxing, John spent the day replacing all of his belongings (except the contact lenses – he is still working on the contact lenses).

Undaunted – John and his brother Anthony head off to Los Angeles today and will make a last ditch effort to replace the contacts before heading off Saturday morning from the Santa Monica peer. As John’s vision might not be what we had hoped we especially encourage those of you in LA to come see him off in style (he may not be able to see you but your presence will be appreciated nonetheless).

Any optometrists who do deliveries in the Mohave – holler! 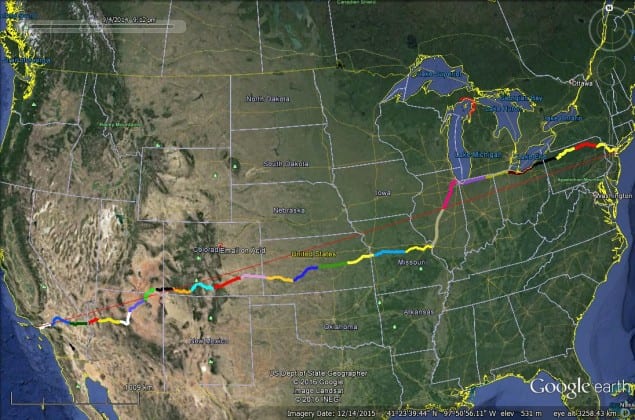 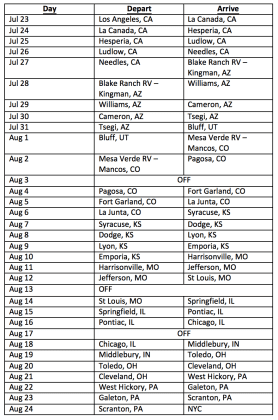