Ground-breaking research on SOIL’s ecological sanitation service, published in the journal, Nature Climate Change, investigated the potential for container-based sanitation to mitigate greenhouse gas emissions when compared to other traditional waste treatment methods. The research revealed that SOIL’s service and method off off-site waste treatment effectively mitigates significant and measurable greenhouse gas emissions. The research is an exciting development for the sanitation sector and opens up the opportunity to explore carbon credits as a way to derive financial benefit, or additional revenue, from the service’s emission reduction potential, to help increase the financial sustainability of the service.

Different types of sanitation and waste treatment practices have the potential to impact anthropogenic emissions of carbon dioxide (CO2), methane (CH4), and nitrous oxide (N2O), differently – as in, not all sanitation practices are equal in emissions. Further, emissions are calculated using both “direct” and “indirect” emissions data: the biological decomposition of feces and urine produces direct emissions; whereas, the operation and infrastructure used to manage feces and urine produces indirect emissions. For example, there can be emissions from the vehicles used to transport fecal sludge to a waste treatment site, or emissions related to the construction of sewage pipes. Additionally, the transformation and application of excreta into reuse products (like SOIL’s compost) can further sequester carbon and reduce anthropogenic emissions. This new body of research examining the intersection of sanitation and waste treatment with climate change is expanding rapidly and is revealing the importance of sanitation in climate change action.

A recent analysis from Johnson et al. found a similar conclusion: sanitation represents more than half of the total city-level emissions in Kampala, Uganda. Johnson et al. modeled GHG emissions using the Kampala’s Shit Flow Diagram and then mapped corresponding emissions to each element of the diagram using the established Intergovernmental Panel on Climate Change (IPCC) methodology. For example, 8% of Kampala’s sewerage is transported to a waste treatment site that has direct emissions produced from the decomposition of excreta, indirect emissions from the operation of the site (e.g. fossil fuel consumption), and embedded carbon related to the construction of said site. In total, the waste treatment site contributes to 31% of Kampala’s total annual sanitation emissions. One key finding from Johnson et al. is that the highest per-capita emissions are associated with treatment of wastewater, storage of fecal sludge in pits and tanks, treatment of fecal sludge, and unsafe discharges to the environment. This key finding complements SOIL’s work and understanding that container-based sanitation (CBS) and an aerobic composting process effectively mitigates GHG emissions associated with global sanitation and waste treatment practices.

SOIL’s sanitation and waste treatment service has been identified by peer-reviewed publications as a pathway to low-carbon safely managed sanitation in Haiti. The next step is for SOIL to use these proven findings from academia to unlock carbon financing. Carbon financing is a mechanism of assigning and awarding a monetary amount to carbon emission reduction. Carbon financing could serve as an alternative and sustainable funding stream for these services and thereby make them more replicable and scalable. In other words, SOIL’s sanitation service could derive financial benefits by achieving climate change benefits.

There are two primary ways to access carbon financing for climate change mitigation: the compliance carbon market and the voluntary carbon market. The compliance market is used by companies, and others, that have to account for their GHG emissions. As you can imagine, it is complex, requires rigorous monitoring and verification, and has limitations on who can participate. The voluntary market is more open and generally consists of four groups:

Like in other capitalist marketplaces, the price for the carbon credit offset is determined by supply and demand. On the voluntary market, the average price of ton CO2-e mitigated per year is between $10 and $25. Via the voluntary market, SOIL could theoretically access about $19 per household per year in the service at a price of $25 per ton CO2 eq, which represents about 50% of SOIL’s operating costs.

Bridging the Gap Between Academia and Implementation

Unfortunately, the reality is that the potential financial benefit to SOIL of carbon credit certification is much lower than about $19 per household per year for the following reasons:

The Johnson et al. paper further shared that sanitation emissions are being underestimated. SOIL also recently found that underestimating baseline sanitation emissions reduces the overall mitigation potential. SOIL’s recent engagement with a third-party carbon credit certification company revealed significant differences in how the mitigation potential (and the subsequent carbon credit revenue) is considered in theory vs reality. The table below compares two methodological approaches: one followed by McNicol et al. and one followed by a carbon credit certification company. Both consider baseline emissions (average per capita emissions associated with the default sanitation and waste treatment system), project emissions (the average per capita emissions associated with SOIL’s service), and the mitigation potential (the difference between baseline emissions and project emissions). 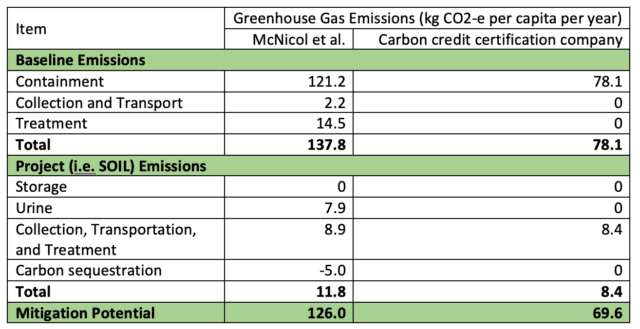 Both McNicol et al. and the carbon credit certification company calculated similar emissions from the collection, transportation, and treatment of waste in SOIL’s service, but there are otherwise significant differences in methodological approaches and estimates. For example, the carbon credit certification company assumed that because pit latrines and septic tanks are emptied so infrequently in Cap-Haitien that all of the material decomposes in-situ and that there are no emissions associated with collection, transport, and treatment of the waste. This is a simplifying assumption with proxy measurements in order to simplify verifcation year-to-year, but it directly contradicts empirical measurements of significant GHG emissions from an informal emptying site in Cap-Haitien. Based on these adjusted estimates and the constraints of carbon credit certification listed above, it is unlikely that SOIL will be able to generate sufficient carbon credit revenue to make the certification process feasible until some or all of the variables cited above are addressed.

Well, we are certainly not giving up! We are hopeful that the carbon credit certification market will continue to grow, evolve and become more nuanced in approach. In the meantime, we’ve found there to be a lot of potential in a “more-than-voluntary” carbon market that aligns well with our carbon financing goals. In a more-than-voluntary carbon market, you can choose to directly support climate-positive solutions around the world, including SOIL’s work in Haiti, independent of the constraints and expenses of the carbon credit certification market. Are you interested in deciding for yourself how much you value the climate change mitigation benefits that SOIL is providing in Haiti? Offset your carbon footprint today!

No Replies to "Deriving financial benefit from SOIL’s climate mitigation action: is it possible?"