I’ve been blogging to you for a little over two months now without taking the time to properly introduce myself. My name is Erica Lloyd, and I’m the new Program Manager here in SOIL’s Port-au-Prince office. I love getting to share some of the exciting things happening here at SOIL each week with you, and hope that you get at least a small glimpse of the amazing work that our Sanitation, Agriculture, and Education teams are doing. At the same time, writing these entries is educational for me – being new to both SOIL and Haiti, I relish the opportunity to learn more about the organization’s history as I research each post. This week, for example, I started out writing a blog post about double-vault toilets, and ended up deep in the SOIL archives, sorting through photos, staff reports, and blog posts from the months following the 2010 earthquake.

I learned that Park Izmery, the soccer field just across the street from where I write, used to be a crowded tent camp, and the toilet there was the first SOIL toilet built in Port-au-Prince following the earthquake. It was there that the SOIL team, recently arrived from Cap-Haitien, met Jimmy, Herby, and Pierre-Marie, who were serving on the Park Izmery Committee. It was with their help that SOIL built the first camp toilet, an elevated double-vault EcoSan latrine. The three became dedicated SOIL volunteers, and are now among my co-workers here in the office. I highly recommend taking a few minutes to read the incredibly moving full version of the story.

So back to toilets: this week, our Sanitation team went to open one of the Park Izmery toilet vaults. Even aside from the significance of this particular toilet, opening a double-vault toilet is always something of an event. Unlike most of the toilets that SOIL installs now, which are emptied weekly, double-vault toilets are designed for the composting process to take place inside the toilet structure. Here’s how it works: the big concrete base supports two stalls, but only one is in use at a time. Waste falls into the vault below until that side is full, at which point that stall is closed and the waste is left to dry and/or decompose (depending on how moist the vault is).

It generally takes a year or two – much longer than the transformation takes at our waste treatment sites, so opening a vault feels a bit like finally getting to open presents on Christmas morning (albeit with a sledgehammer). Alas, after all the anticipation, there wasn’t much compost, and it was quite dry.  It felt a bit like ripping into your first gift only to find socks from your great aunt: useful, but not much fun. So instead of heading off to our experimental farm to grow hot peppers (after our thorough lab testing cleared it for safety), this compost is headed to our waste treatment site and will be used as cover material for the next load of fresh poop. 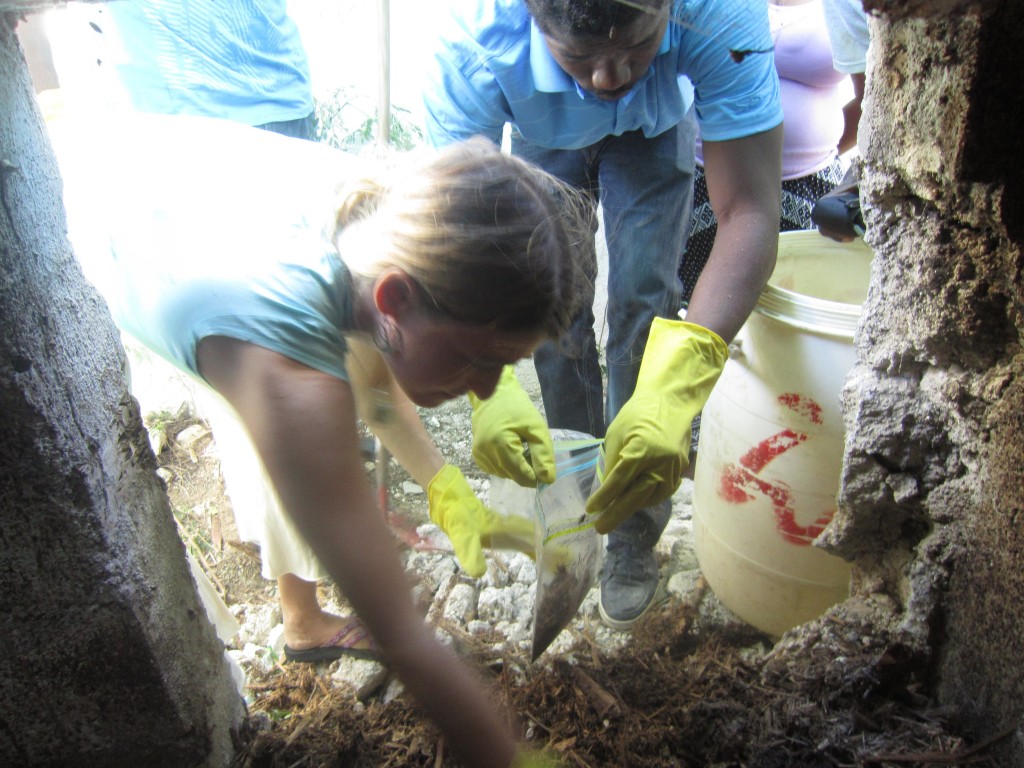 Sasha and Jimmy emptying the vault

On the bright side, the Sanitation team was delighted at how easy it was to empty the toilet! The whole process took about an hour, and there were no foul smells or visible signs of poop. It was undoubtedly much nicer than emptying a traditional pit latrine, but more importantly, it’s considerably safer as well.  The process of cleaning out the vault makes a powerful case for using double-vault EcoSan toilets as an alternative sanitation solution that would reduce pathogen exposure for sanitation workers.

Above all, we’re glad to know that during an incredibly hard time, our toilets provided safe, dignified sanitation for Park Izmery’s tent camp residents – and continues to do so now for hundreds of soccer fans!

Check out these great photos of Park Izmery over the past four years, beginning with planning meetings and educational outreach in the tent camp, to the toilet grand-opening celebration featuring Haitian superstar BelO, some very cute toilet patrons, the return of soccer, and our vault opening this week.

No Replies to "Digging into SOIL History"