Dubout Soccer Team Biding Their Time for a Comeback 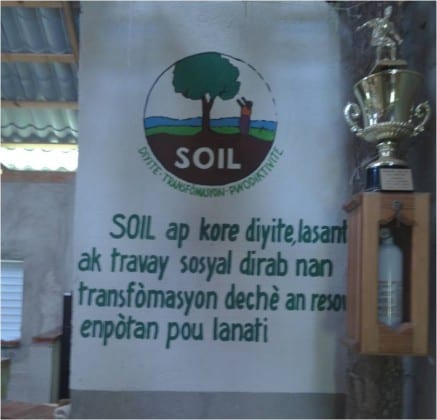 When you walk into SOIL’s Cap-Haitien office, you won’t miss the beautiful trophy in place of pride next to the SOIL mission statement. While SOIL has won plenty of accolades for our work in ecological sanitation, this particular trophy is actually a symbol of the team’s other passion and area of expertise: soccer.

Last summer, the Cap-Haitien office faced off against the local champions, the Dubout Sport Club. Dubout had recently won a regional tournament in Caracol and had taken home the trophy – the trophy that the “Ekip SOIL” (SOIL Team) then seized in a competitive soccer game at the office soccer field.

SOIL’s Cap-Haitien Regional Director, Theo Huitema, says that Dubout is looking for a comeback. They want a rematch, and they want the trophy back. Theo has delayed the game, claiming the SOIL team is out of shape. My concern is that the SOIL team is only getting more out of shape, while Dubout is in training and only getting hungrier for the win.

The Dubout coach is a mason, and he’s hired his whole team for construction projects at SOIL and elsewhere. These projects not only finance the Dubout team’s soccer balls and training gear, it’s also an opportunity to gel as a team and whet their appetite for a comeback. Seeing “their” trophy each time they come to work at SOIL only makes them more focused on getting it back.

Last week, the Dubout Sport Club returned to the SOIL office to build a cement and steel ford to traverse the streambed that’s flooded and eroded the road during the past few weeks of heavy rain. In a single day, the team positioned the channel for water, created the steel foundation, and laid the cement. The next day, cars and motorcycles were already driving over the ford to get to the office. What teamwork!

Unfortunately the ford is only a short-term solution; the $700 ford should last about a year and will require constant maintenance, but it will make it possible for SOIL and visitors’ vehicles to enter the Cap-Haitien office compound. In the long-term, we’ve started to think about building a bridge that’s level with the road and will involve a more extensive construction period – yet more opportunity for the Dubout soccer team to train together.

After seeing the Dubout team in action, I can only hope that Ekip SOIL can find some time to train in the next few weeks. Either that or Theo should think about hiding the trophy….