We are REALLY excited up here at the Cap-Haitien office about our new cover material: ground peanut shells! We have been using bagasse (a byproduct of sugarcane production) for years, which has been doing the job, but perhaps not breaking down as fast as we would like. It’s important for us to have a carbon material that works well with feces to break down into compost in a timely manner, as now we are processing so many people’s “waste”. Because sugarcane production is a large portion of the Haitian agronomy sector, it’s been easy for us to obtain as much bagasse as we want.

However, we have recently become good friends with Meds for Kids, a company contracting with UNICEF to make vitamin-enriched peanut butter bars for children. Currently, they are sourcing half of their peanuts from the surrounding countryside and are shelling so many peanuts each week that they have to burn the shells for lack of anything else to do with them. SOIL to the rescue! We stopped by their factory one day and decided to take a few bags of peanut shells back to the office with us, and we liked it so much that now we’re going back every week to collect more! 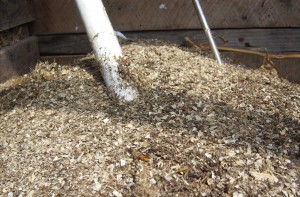 A pile of ground peanut shells ("po pistach") just waiting for an EcoSan toilet to go in.

We’re finding that because the shells have a smaller surface area than bagasse, they are able to cover the toilet deposits much more easily, without so much of the sweet smell bagasse emits (which also attracts the ants…). We’re experimenting right now with using the peanut shells (“po pistach” in Haitian Creole) in the composting process: we built a compost bin specially made for compost that ONLY has the po pistach mixed in (no bagasse) so we can see how it processes over time. Our hope is that it will have a quicker turnover rate without needing as much sifting at the end because the material is uniform in shape and size. The bin is almost filled, so now we’ll wait and see what happens!

No Replies to "Experiments in Composting: Po Pistach!"