Today is World Food Day, a day dedicated to eradicating world hunger that affects more than 842 million people around the world.  It’s an important day to us here at SOIL because Haiti is one of the most food-insecure nations in the world – in 2010, only Eritrea, Burundi, and the Democratic Republic of Congo were worse off. So we want to shed a little light today on how SOIL is waging war against hunger – not by collecting canned goods or distributing meals, but by making it possible for Haitians to grow more food.

Haiti was once one of the most agriculturally productive countries in the world; it was dubbed “the Pearl of the Antilles” and produced over 2/3 of Europe’s tropical produce in the 1700s. But decades of poor land management and poverty have left Haiti’s environment deforested and depleted of essential nutrients.   Although the majority of Haitians farm, they are hampered by soil erosion and infertility and usually can’t afford chemical fertilizers.  As a result, Haitian farms currently produce only about half of the food needed to feed the population. Moreover, unfair trade laws and aid policies mean that the 55% of food that’s imported frequently undermines and impoverishes Haiti’s farmers. 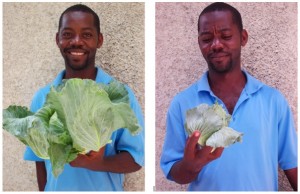 This comes as no surprise, since the compost is subject to as much scientific scrutiny as any fertilizer on the market!  Our Agriculture and Sanitation teams are constantly testing and tweaking their process to produce a superior compost – in fact, Konpòs Lakay has twice as much nitrogen as most composts on the market.

We’re excited to continue exploring the economic and health benefits of using EcoSan compost as a soil amendment in Haiti. In addition to our on-going field trials, we’re actively working with several independent researchers who will be doing comparisons of SOIL compost vis-a-vis chemical fertilizer, biochar, and untreated soil.

In the mean time, we’re happy to have the endorsement of compost customer Elianese Desir, who raved: “I love SOIL’s compost a lot because it helps grow flowers, tomatoes, [and] cherries…. I would love to get more compost so I can plant more plants!!”

Want to learn more? Check out these articles:

No Replies to "Food Security Starts With SOIL"