Today is Haitian Flag day and as Haitian’s everywhere celebrate their proud history, SOIL’s sanitation director, Baudeler Magloire (“Bobo”), is stuck in an airport in Morocco.

Many of you who have been following SOIL’s recent blog posts about Africa know that, thanks to a grant from National Geographic, SOIL has spent the past 3 weeks working in collaboration with several women’s group in northern Benin.  The most amazing part of this trip was that Bobo was able to travel to Benin to share his experience in Haiti in the country of his ancestors.  Bobo was responsible for all educational activities during our trip and without his presence the project could not have been successful. Despite the fact that Bobo was, arguably, the most important member of the SOIL team, it was an incredible challenge to get him to Africa.

We first bought tickets for Anthony, myself and Bobo together on Air France traveling to Cotonou via Paris.  We purchased the tickets well in advance as they are a requirement for applying for the French transit visa required to pass through the airport in Paris.  Bobo had no problem obtaining a visa for Benin and we were not worried about his French visa as it was only a transit visa to pass through the airport.  We were shocked when Bobo returned from his visa appointment at the French Embassy and told us that his visa request had been denied.  We tried everything to speak with the French embassy but were not able to get a meeting to discuss the reasons he was denied a visa.  We then had to cancel his ticket with Air France and look for other options.  SOIL staff spent days searching for another option only to eventually settle on the sole option, flying Bobo through 5 countries to get to Benin.  We were able to secure tickets for Bobo to fly from Port au Prince to Panama to Havana to Madrid to Casablanca to Lome to Cotonou, a 3 day journey.  After significant research we found that Bobo would only need one visa for Cuba to make this trip since none of his other layovers would be more than 24 hours.  Though it was Bobo’s first time traveling outside of Haiti, he emerged from the airport in Cotonou 3 days after leaving Port au Prince looking as fresh as when he had left.  We breathed a collective sigh of relief and headed off to northern Benin. 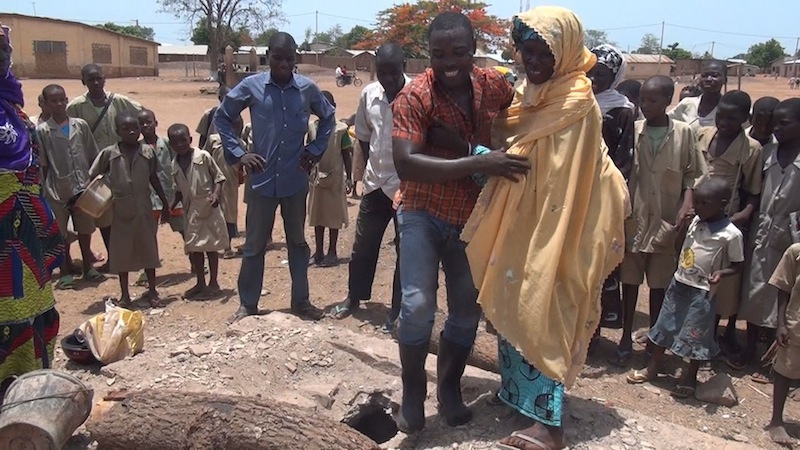 After digging out EcoSan compost, Bobo gets helped out of the latrine by one of his new friends from Dunkassa.

Unfortunately Bobo’s return journey has not gone as smoothly.  He was supposed to leave Cotonou on Sunday May 13 but for some reason (as yet unknown) he was stopped by the airport authority and not allowed to board his flight.  As a result he missed his second flight from Madrid to Havana with another airline.  After a day of scrambling to and from the airport with the help of Moumouni, a close associate of our partner organisation in Benin, Bobo was able to determine that in fact he was blocked because the agent at the airport had not looked at all of his documents andassumed that he did not have the appropriate visas.  The airport was not willing or unable to re-book after frantic, intercontinental Skype calls Leah was able to get Bobo a new ticket from Madrid to Havana, but we had to buy a whole new ticket as he had already missed his first flight.  We got the new ticket to Havana, changed the ticket for the final leg of Bobo’s journey back to Port au Prince and sent all of the tickets off to the airport in Cotonou.  They were then able to rebook Bobo’s first leg of the trip to Madrid but he would have to wait 4 days for the next available flight.

On Thursday night we all went to bed with our fingers crossed hoping that Bobo was well on his way to Madrid.  We did not hear from Bobo again until Friday night when he called Nick to let him know that he was stuck in Casablanca.  We do not have all of the details yet but it seems that because his tickets would require that he spend the night in the Madrid airport he did not have the appropriate visas.  When Bobo arrived in Madrid he was sent back to Casablanca.  The authorities are holding his passport until he purchases new tickets that will allow him to fly in and out of Madrid on the same day.  It is 2 am here in Nairobi and I have finally found 2 tickets that would get Bobo as far as Cuba.  We are all on standby waiting to hear when he can get his passport back so that we can book the tickets.

We are still hopeful, but worried about Bobo.  SOIL will do everything necessary to get him home, and we do think it is possible, but we want to reach out to those of you who know Bobo or have been touched by his experience in Africa to ask for your support. All of these ticket changes have been very expensive and none of them are covered by any of our current grants.  It is in emergencies like this that we are most reliant on our individual donors who allow us the flexibility to respond to crises. So far ticket changes have cost over $3000.  If you are able, please help us to raise this money.  You can donate online in the form on the right or send a check to SOIL, 124 Church Road, Sherburne, NY, 13460.  Please indicate that your donation is to “bring Bobo home” on both checks and online donations.

For those of you who believe that we are all global citizens and should have equal access to visit countries other than our own, please hold Bobo in your thoughts.

With love from Nairobi, Sasha

1 Reply to "Help Bobo Get Home"