Our dear friends at Hesperian Health Guides (an organization working to create and disseminate health resources on the ground that are translated into local languages) have recently translated their seminal work, called “Where There Is No Doctor” into Haitian Creole (“Kote ki pa gen Doktè”). At SOIL we are incredibly pleased to share the news of this work, and also figured it’s a great time to remind our friends about another great resource that Hesperian Health Guides and SOIL collaborated on: a sanitation guide called “Sanitation and Cleanliness for a Healthy Environment” that SOIL translated into Creole “Asenismen ak pwopwete pou yon anviwonman sen”. We are incredibly proud to have partnered with HHG to translate this work – check it out here!

And please read on to find out more about the release of “Kote ki pa gen doktè” (reposted from the Hesperian Health Guides Blog):

In Haiti, low pay and life-threatening working conditions have led to a doctors’ strike, which has been going on for the past 3 months amidst outbreaks of cholera and Zika. 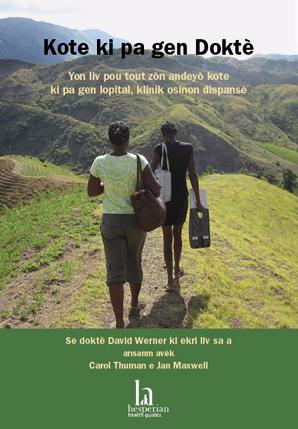 Poor people in Haiti already had very limited possibilities for healthcare, and the strike has exacerbated their lack of access to resources and treatment. Haiti’s three main public hospitals have been shut down since the beginning of the strike, leaving expensive private hospitals and NGOs like Médecins Sans Frontières as the only options for care.

Even before the strike, patients were required to buy their own supplies, such as syringes and gloves, and the overcrowded hospitals had very limited materials to work with — frequently being short on essentials such as oxygen, anesthetics, clean water, and electricity

Many doctors have not been paid since February. NGOs and private hospitals are stretched to the limit accommodating public hospital patients, and the need for accessible health information is even greater than usual.

That’s the environment into which we are releasing the 2016 Kreyol edition of Where There Is No Doctor. We know this translation will bring lifesaving information to people with few other options for treatment.