How Rapid Urbanization in Haiti can overburden fragile systems

Every October, UN-Habitat and partners organize a month of activities, events and discussions on urban sustainability. Urban October sheds light on the immense impact that cities have on the present and future sustainability of our planet. As more and more people around the world migrate to cities, it has become even more important to create sustainable, carbon-neutral, inclusive cities and towns.

According to the UN, currently more than half of the world’s population lives in urban areas and by 2050 approximately 70% of the population is expected to live in urban areas. With more than 80% of global GDP coming from cities, urbanization can contribute to sustainable growth if managed well. However, many cities around the world, especially those in the Global South, are struggling to keep up with increasing populations in urban areas, which is causing a greater burden on already strained infrastructure and economies. Instead of becoming destinations of opportunity, these urban areas have become increasingly unequal with striking differences determined by socioeconomic status, race, gender, etc. with further impact on inequitable access to basic services, affordable housing, adequate transportation and jobs.

Today, more than half of Haiti’s population lives in cities and towns, whereas in the 1950s, around 90 percent of Haitians where living in the countryside. The late 1980s brought a large wave of migration of Haitians from rural to urban areas, due to loss of employment and subsistence livelihood opportunities in rural areas – resulting from environmental degradation and decreased soil productivity.

Unfortunately, the public sector has not been able to keep up with the pace of urban migration and families face new risks in these rapidly expanding urban settlements. One of the greatest risks is disease and the overwhelming majority of these diseases are caused by poor sanitation conditions and water contamination. As an organization that works in dense urban communities, we know that urbanization often further exacerbates existing issues and vulnerabilities. 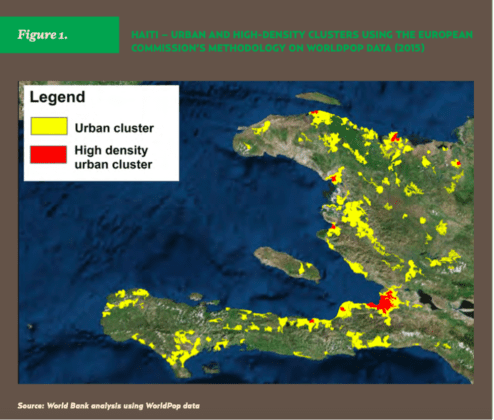 Haiti is currently the fourth most urbanized country in Latin America & the Caribbean (LAC) with more than 133,000 Haitians moving to cities each year. However, unlike similar countries in LAC, Haiti has not benefited from urbanization. According to the World Bank:

“Widespread fragility and costly natural disasters may have undermined the benefits of the urbanization process. A closer look at the country’s system of cities, the deficits in urban infrastructure and services, and the limitations in governance and urban financing at the local government level helps explain why Haiti has urbanized without economic growth.”

Despite the challenges of rapid urbanization,  Haiti has seen some improvement in coverage of some basic services in cities. However, while certain services such as education and electricity, improve as people migrate to urban areas in Haiti, other services like sanitation continue to be a critically pressing issue. Due to the densely populated living conditions of households in these urban settlements, the lack of access to improved sanitation services that safely collect and remove waste has the ongoing potential to become a significant public health risk.

In cities experiencing rapid urbanization, like Port-au-Prince and Cap-Haitien, the traditional approach to urban sanitation, premised on extending sewerage networks and building wastewater treatment plants, will not be sufficient to deliver citywide sanitation services for all. That’s why it is critical to identify innovative technological solutions, services, and financing mechanisms to meet the current and pressing sanitation needs of people living in rapidly growing urban settlements.

Container-based sanitation approaches, like SOIL’s, can have a key role in ensuring the provision of citywide inclusive sanitation and meeting the immediate unmet need of sanitation services in these areas. SOIL is committed to providing a sanitation solution that addresses the critical need for access to in-home toilets and safely managed waste treatment in densely populated urban areas. This regenerative sanitation solution seeks to not only offer better sanitation options for vulnerable urban communities, but also seeks to help build more resilient and sustainable systems that protect Haiti’s vulnerable ecosystem and improves livelihoods for Haitian women and men.