As a Stanford graduate student studying ecology, Sasha decided that upon graduation, she would go to Haiti to focus on sustainable agriculture. She followed through, making her first trip to Haiti in 2004 as a human rights observer shortly after a volatile political coup and fell in love with the country.

Sasha was taken with the “communal spirit and courage” Haitians displayed in the face of shootings in the streets and fear of retribution after the coup, as well as their fortitude in confronting the more mundane struggles.

“People hadn’t eaten enough and couldn’t find clean water, and they were still able to receive me so warmly,” she said. She made twelve trips to Haiti during her last two years of school and permanently moved there in 2006, one week after her graduation. 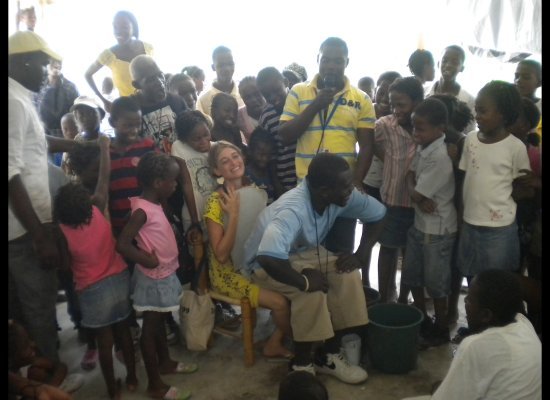 Sasha was met with grim statistics in her new home country. Only 16% of rural Haitians and 50% of those in cities have access to adequate sanitation facilities–the lowest sanitation coverage in the Western Hemisphere. The Caribbean nation is also characterized by a dearth of national resources and abysmal agricultural output due to poor soil fertility, soil erosion and a lack of fertilizers.

Not only did these issues amount to public health hazards and economic losses, but Sasha saw them as human rights issues as well. “As an observer, I saw that the most prevalent human rights abuse in Haiti was the lack of access to basic services, sanitation being one of them,” she said.

Sasha’s ecological sanitation initiatives tackle these issues with a shockingly simple solution: a new kind of toilet built to compost human waste into nutrient-rich fertilizer. Sasha realized, “instead of using industrial processes to create fertilizer, we could be using nutrients already available” and her “Ecosan” toilet was born.

In 2006, she established SOIL or “Sustainable Organic Integrated Livelihoods,” with a mission to transform waste into resources in order to empower Haitian communities. SOIL has since launched a successful public dry toilet program, and piloted urban and rural household sanitations programs. The organization employs 50 Haitians on a full-time basis, and has over 200 national part-time employees.

Sasha expected to meet resistance to her self-described “kooky” idea, but found the concept quickly accepted, particularly in rural areas, where animal-manure based fertilizer has long been the norm.

“There’s a general feeling in Haiti, a desire for independence and self-sufficiency–the idea that Haitians could be producing their own resources instead of having to buy them from other countries–that drives acceptance,” she explained as she touched on her mission of “ecological liberation” for Haitian nationals.

Providing sanitation for Haitians goes beyond the obvious public health issues. While the toilets provide much-needed sanitation infrastructure to tackle water-borne diseases, the leading cause of death in Haiti, they also address what Sasha calls “a dignity issue.”

To date, SOIL has focused exclusively on public sanitation, recently providing 200 toilets in the IDP camps that grew around Port-au-Prince after the 2010 earthquake. Sasha is now focused on developing a household model of the compost toilet. “From a human rights perspective, people deserve access to private sanitation.” she said.

SOIL received a surge of funds after the earthquake, but most were distributed for emergency care in nearby communities, and Sasha is unsure how they will procure stable funds to meet their private sanitation goals. SOIL’s third grant from OxFam to conduct work in the IDP camps expires in April 2011.

Still, she remains hopeful about the future and wants to get it right throughout Haiti before bringing her Ecosan technology to new countries. When the time comes for expansion, she wants to do it the smart way, with a proven framework and through collaboration with established non-profits.

“I feel like what makes it work is the social connections we have here, and that’s something that takes years to build up. What we’d like to do rather than expanding to other countries is to really pilot this well in Haiti and then work with other organizations based in other countries to share the technology.”

In the meantime, Sasha is focused on maximizing the economic benefits of her programs for Haitians and maintains a healthy sense of humor about her work. “Everybody poops. That’s a fact. So yes, we’re figuring out how to make that really profitable for Haitians.”