On October 1st, Hurricane Matthew turned just a few degrees to the east putting the southern peninsula of Haiti directly in its path. Three days later, 142 mph winds ripped over small mountain villages and coastal cities damaging or destroying nearly 150,000 homes and more than 80% of regional crops and livestock. Communities were inundated with rains, flooding latrines and septic tanks.

Less than two months later, just as Haiti disappears from the headlines, the true effects of Hurricane Matthew are starting to hit. More than 3,500 suspected cases of cholera, a disease unknown to Haiti before it was introduced by the negligence of the United Nations Peacekeeping force (MINUSTAH) in 2010, have been reported. There are thousands of children who now know the sadness of rain when you don’t have a roof over your head, teenagers who will have to repeat the school year because their classrooms have been turned into temporary shelters, mothers who have left behind their few belongings to seek care for their sickened children, and fathers who have lost their only safety net: the crops and livestock they depend on.

On the day of the hurricane our organization, SOIL, made the decision not to solicit relief funds. We work in northern Haiti and Port-au-Prince, and thankfully both regions were spared the full brunt of the storm. We are also not a relief organization, and for the past decade we have focused on slowly working towards long-term sanitation solutions. But in the days that followed, it became clear that we could not watch from the sidelines. Our employees were safe, but some had to wait more than a week to hear from their relatives in the south –  a week of wondering if they were safe, if they still had homes.

As we waited and hoped, we realized that we had the power to make a difference. Over the years we have worked in Haiti, we have established strong networks of trust with community-based organizations, including several local groups that were instrumental during our response to the 2010 earthquake. And we are fortunate to also have a family of supporters around the globe who share our vision that everyone deserves access to the basic necessities for survival. We realized this put us in a unique position where we had both the ability to raise funds, and the connections to local leaders who could meet the unique challenges of a natural disaster in Haiti.

On October 7th, we launched an emergency relief campaign that raised over $76,000. Although it may only be a drop in the bucket considering the entire toll of the storm, it was hugely significant for our partners who do not have access to help from abroad. To date, our partners have locally purchased and distributed more than $60,000 of immediate relief supplies such as food, drinking water, and materials for shelter. We are grateful to have had the honor of serving as a conduit for goodwill between those that want to share and those who are able to ensure that the goodwill meets those who need it most. But in addition to being honored to support, we are thankful for the lessons we have learned from our Haitian partners’ organizations –  lessons that we never would have learned had we chosen to distribute the contributions ourselves.

The earthquake in 2010 highlighted the importance of buying locally instead of shipping in goods from outside of Haiti, which has had devastating impacts on the local economy. Thanks to those early lessons we see far more aid groups attempting to source locally in the aftermath of the hurricane. Though still not universally accepted, local sourcing is now an important part of the dialogue around emergency response. However our greatest lesson in the past month has been that it is not only important to source goods locally, it is also critical to look for innovation locally. To some it may seem obvious that local leaders are most likely to have innovative and appropriate ideas on how to distribute aid, but sadly most decisions about the implementation of emergency programs come from foreigners employed by aid organizations. The lessons we learned from Hurricane Matthew are the lessons we learned when we accepted that we (both Haitian and foreign SOIL staff), in fact, did not know best.

The first week we did what we knew how to do: bought whatever materials we could and drove our truck to Les Cayes, meeting with local officials and distributing the aid with the help of local partners. However, we knew that this was not a sustainable strategy. Our truck, which we are completely reliant on for SOIL’s normal daily operations, was not up to the challenge, and we knew that continuing down this path could cripple the sanitation work we have been building for a decade. The next weekend, we did as most non-governmental organizations would do and rented a fleet of vehicles to transport the emergency supplies to the south. Within hours, two of the trucks had broken down, and one had lost a wheel and rolled over. Fortunately no one was injured, and the trip was ultimately successful, but we lost hours repackaging goods and waiting for a replacement truck to arrive – and we could have lost valuable supplies, or even lives. 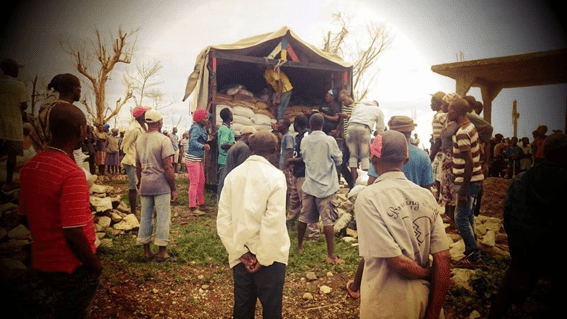 The following week, Rea Dol, the founder of SOPUDEP, advised an alternate tactic. Rea is from Jeremie, and she was able to get in touch with one of the two truck drivers who do commercial runs between the capital and the mountains of Jeremie. The truck driver was contracted to come to Port-au-Prince with his vehicle, where it was loaded with $20,000 worth of supplies. The team from SOPUDEP and SOIL followed behind the truck in another vehicle. When they reached the mountain villages above Jeremie, the second vehicle dropped back, allowing the truck to enter the community alone, as it has for years. It did not look like an aid caravan, and, as such, the truck made its way to the homes of community leaders who were going to lead the distribution without inciting an understandable panic from community members who were desperate for aid. With this approach, the team was able to distribute supplies to 12 rural communities in dire need with minimal disruption. 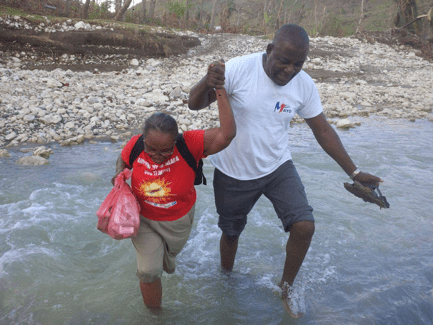 And just a few weekends ago, our partner OKZEDEL, from the community of Roche-à-Bateau, where 50 people were killed in the storm, came up with yet another innovation to address the problems of transport and distribution. OKZEDEL founders, Paul Loulou Chery and Ginette Apolon, purchased $10,000 worth of roofing metal in Les Cayes (the nearest city) and negotiated a voucher system with the storeowner who was holding the supplies. They then walked, through waist deep rivers and up endless mountains, and went house to house in the community in which Loulou was raised, assessing the damage and handing out vouchers to families so that they could go and pick up the supplies they needed to repair their homes. This strategy not only avoided the logistical challenges of transporting bulk goods and the frenzy inherent in high-profile distributions, it also acknowledged the ingenuity and capacity of those who are too often seen as helpless victims.  This strategy acknowledged that the farmers who live on the outskirts of comfort, are the very people who know how to rebuild the fragile lives they fought to maintain.

We are so grateful to our partners SOPUDEP and OKZEDEL for teaching us that sometimes the best you can do is step aside and acknowledge the wisdom of those who survived.

We hope that sharing these stories can contribute to the global dialogue about how to best provide aid following an emergency.