First and foremost we want to thank you for helping us to replace the Port-au-Prince Poopmobile. This was our most successful fundraising campaign to date, and we were inspired and humbled by your generosity and belief in our work. The new Poopmobile started making its first rounds last week and even though we haven’t had time to paint it yet, everyone loves it! Because Poopmobile II is bigger than the one it replaced, it has already helped us reduce the overall costs of our operations by enabling us to carry more drums on each trip. Thanks to your support for the Poopmobile campaign, there will be no interruption in SOIL’s emergency sanitation service that currently benefits nine camps where over four thousand people are still living years after the earthquake. 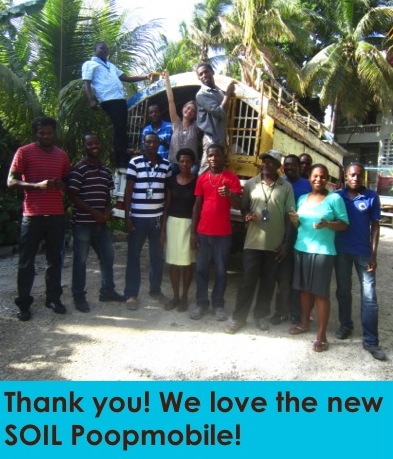 Overall June was an incredibly busy and productive month for us in Haiti, and we continue to make progress towards our ultimate goal of supporting the nationwide expansion of sustainable sanitation access through innovation, outreach, and social business development. An especially notable milestone this month is that SOIL toilet users in Cap-Haitien have started paying small monthly user fees for their household and “communal” toilets (where up to five families share the maintenance responsibilities and key to a semi-private toilet). The fees cover SOIL’s waste collection and service costs, and are an important first step in demonstrating the potential for a private-sector solution to Haiti’s sanitation crisis. In order to continue to increase market demand for SOIL’s rich, organic EcoSan compost (Konpòs Lakay), SOIL agronomists also continued to make expansions to SOIL’s experimental farms in Port-au-Prince and Cap-Haitien – evidenced by many large and delicious harvests throughout the month. Inspired by the productive potential of SOIL’s Konpòs Lakay, we recently negotiated a very large sale of the compost to a famous company in Haiti that plans to use it for large-scale local production… stay posted for more news as we’ll be making the official announcement of this sale soon! You won’t be disappointed! 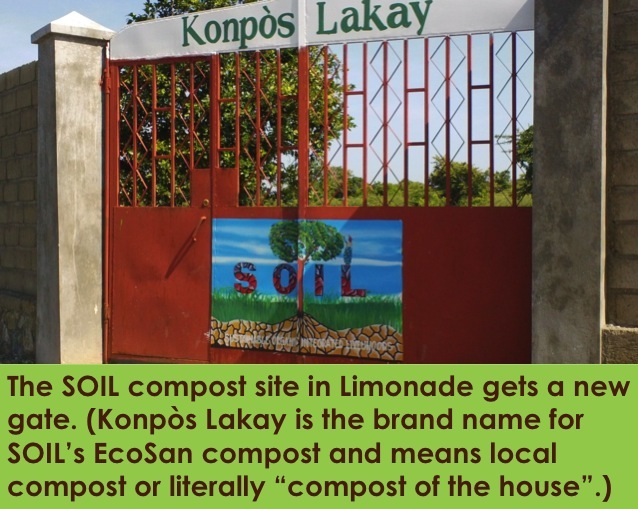 With love from Haiti,
the SOIL team