What does the coastal community of Bolinas, California have in common with the impoverished island nation of Haiti? The surprising answer is a fledgling sanitation strategy whereby human waste is composted into nutrient-rich fertilizer, all supported by research from Lawrence Berkeley National Laboratory scientist Gary Andersen.

“The amount of water and energy needed to treat the combined sanitary and household waste in municipal wastewater treatment plants is simply not sustainable,” says Andersen, head of the Ecology Department in Berkeley Lab’s Earth Sciences Division. “By diverting septic waste, that saves 40 percent of the water in an average household.” 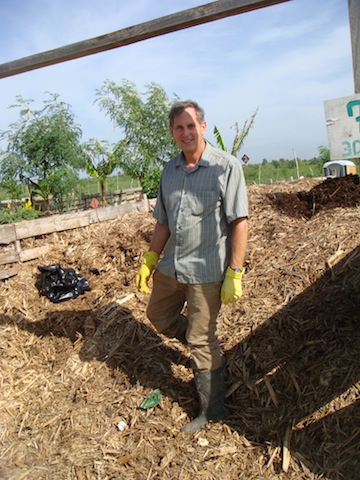 Still, Andersen knows it’s not an easy sell. His challenge is to remove the “yuck factor” out of human waste compost. The way to do that, he says, is with science. By extracting DNA from the compost and analyzing it, one can be sure that it is pathogen-free.

So how would anyone in Haiti, a country where a majority of the people don’t even have functioning toilets, and hospitals are in dire need of basic medical equipment, go about extracting and analyzing DNA? That is why Sasha Kramer, director of the U.S. nonprofit SOIL (Sustainable Organic Integrated Livelihoods), contacted Andersen. Her organization produces hundreds of thousands of gallons of compost for agriculture and reforestation efforts in Haiti.

She met Andersen last year through a mutual connection. She hoped he could perform the DNA analysis on the Berkeley Lab PhyloChip—an award-winning device he co-invented that can test for 60,000 species of microbes in a single sample from any environmental source, without the need of culturing—and wanted to send him samples of her compost. He suggested that the samples might be difficult to get through U.S. customs and said it would be easier if she could just send him the extracted DNA.

“That’s when I realized that we were talking from two different worlds,” said Kramer, who has a Ph.D. in ecology and founded SOIL in 2006. She spends most of her time in Haiti, where more than 99 percent of human waste is dumped into the ocean or rural areas, untreated. Since the devastating 2010 earthquake SOIL has become the country’s largest waste treatment operation, collecting solid waste from 50,000 people and producing 3,000 gallons of compost every week.

Andersen, also a professor in UC Berkeley’s Department of Environmental Science, Policy and Management, decided the best solution was to come up with a cheap and portable DNA extraction kit and teach the SOIL employees in Haiti to do it themselves. “The people in my lab got together and we brainstormed on ways to simplify the DNA extraction process and substitute smaller and cheaper pieces of equipment that could accomplish the same goal,” he said. “We got the lab hardware down to four pieces that could fit inside a large shoebox and cost less than $1,500 dollars.”

The project was dubbed DNA Everywhere and received funding from the Rathmann Family Foundation and the 11th Hour Project, a program of the Schmidt Family Foundation. Andersen enlisted help from the Carbon Cycle Institute, a project of the Marin Carbon Center, based in Nicasio, CA. 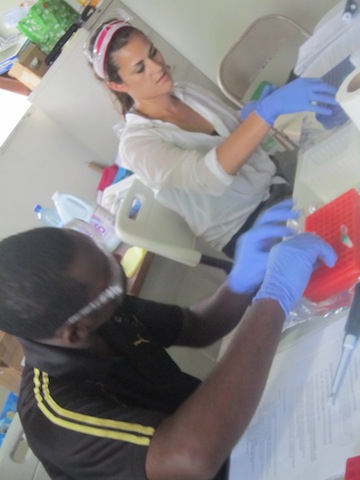 With assistance from Gabrielle Pecora, a Berkeley Lab affiliate who also works for the Carbon Cycle Institute, Andersen tested the mobile DNA extraction kit on nonscientists, including foundation administrators and farmers in Marin, and refined it based on their feedback. “That was the hard part. We really learned a lot,” he said. “Things we thought anyone would understand, we kind of glossed over. We really learned what things were basic and what were not.”

Finally DNA Everywhere was ready for travel. With the equipment packed in their suitcases, Andersen and Pecora flew to Port-au-Prince in the first week of October. They set up a mini laboratory in SOIL’s office and gave eight of its employees an accelerated microbiology course, with Kramer translating to Haitian Creole. “Most of them had at least a high school education,” Andersen said. “We started with lab basics—sterile technique, how to use pipettes, volumetric measurements, precision. At the end of two weeks they were all very good at doing the DNA extractions, as good as anyone. They’re very quick learners.”

The main components of their lab are a centrifuge, a vortexer (for mixing), pipettes and a battery-powered balance, which Andersen said was their weakest link, “a step above a food scale.” The entire set-up can fit on a card table. The potential applications for DNA Everywhere are boundless. “The hard part is the upfront part of getting the DNA extracted,” he said. “You could take this anywhere where the technology isn’t available. You could use this to look for pathogens in drinking water, in food, in blood and other clinical samples.”

They did have to make some modifications for Haiti’s climate. “We like to wear clean lab coats to minimize contamination,” said Andersen. “For the same reason, we had to stop the fan in the room that was our only means of relief from the heat. We quickly made the decision that, between the two, lab coats were not a necessity.”

SOIL will still have to mail the DNA to Berkeley Lab or another institution for analysis. But the next step of Andersen’s research is to come up with a way for places like SOIL to conduct simplified assays for specific pathogens, such as the bacterium that causes cholera, rather than the sophisticated tests run by the PhyloChip.

His research on improving the efficiency of pathogen destruction could also help to streamline SOIL’s composting process, which currently takes six months and involves adding organic material, such as sugarcane bagasse, to the raw waste, mixing it once a month and otherwise letting the natural microbes do their work, digesting carbon and nitrogen and killing all the human gut microbes.

Kramer is optimistic about the long-term impact of the DNA Everywhere project on her organization. “This gives us the ability to try new designs and see if we can further optimize the composting process,” she said. “Cholera is on everyone’s mind here, and anything that we can do to reduce this risk will save lives.”

The pilot project in Bolinas that Andersen is working on is very similar in concept. Bolinas also has a water shortage problem. Working with the Carbon Cycle Institute, Andersen’s Thermopile Project will start by converting 20 homes so that gray water is separated from the septic system. Those homes will get new vacuum-type toilets (“no smell, not gross at all”) that will send all waste to an outdoor vault, similar to what is used at some parks. “It’s cheaper than getting a new septic system, and it’s way cheaper than a wastewater treatment system for a community,” he noted.

Andersen is also working with local and state regulators on the compost that will be made because there are currently no government regulations that apply specifically to compost. “No one is doing this at any significant scale in the United States,” he said. “There’s interest by these regulators to get ahead of the curve.”

His dream is to get one new high-rise in San Francisco completely off the sewage grid. He sees that as the tipping point. After proving that it would work there, there’s no reason why it couldn’t become more widespread. “There’s nothing structurally hard about scaling it up,” he said. “It scales very nicely.”

From there he can very well imagine a world where composting is the method of choice for treating septic waste. “At some point in the future, we’ll look back and say we can’t believe we flushed all those good nutrients and all that valuable water down the drain,” Andersen said.