Their work is unglamorous. It may even be the definition of unglamorous for many people. But the six men who make up the compost team in Cap-Haitien are no short of sanitation superheroes in the eyes of SOIL and the surrounding community.

Why? They take something that is deadly, a leading killer of children under 5 in Haiti, and transform it into an organic, money-making, earth-nourishing resource. SOIL’s EcoSan system, turning poop into compost, take the problems of access to dignified sanitation and waterborne diseases from fecal contamination, and turn them into the solutions to the agricultural crisis, all while boosting the local economy.

Despite a common stigma surrounding working with waste, the team at Mouchinette, our waste treatment site in northern Haiti, talk proudly about their work with SOIL. They post pictures of themselves working in their new green uniforms on Facebook. They give testimonials at all staff meetings about how their lives have been transformed through this work. And they are unsung heroes because they have the courage not only to transform dangerous waste, but also to transform people’s perceptions of waste and those who work with it.

I interviewed each of the guys individually, under a mango tree behind the piles of sugarcane bagasse and peanut shells that they mix together to make our cover material.

One point that they all commented on is an ethos of teamwork that they have cultivated at the site. I can imagine why it’s so important that they work together well; there’s no room for error when you’re working in waste treatment. Protocols, calendars, and rules need to be strictly followed to protect everyone’s health. The pride the team feels in their camaraderie was quite obvious to me

Here’s a brief introduction to our sanitation superheroes for those of you who haven’t had a chance to meet them (yet). 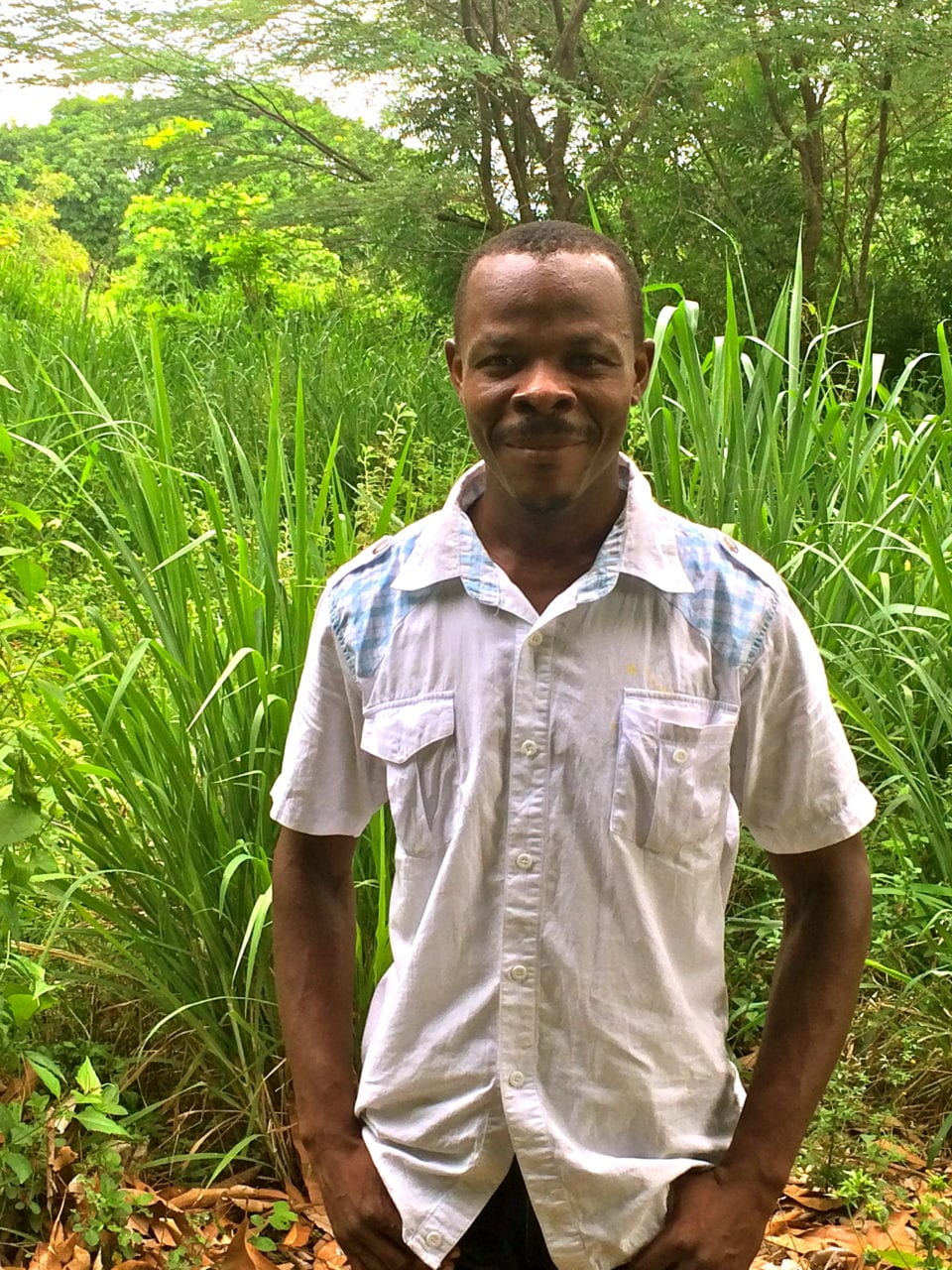 Milien has worked for SOIL since 2012 and was recently promoted to the supervisor position, which makes his wife and daughter proud! He noted that it’s been amazing to watch all of the growth at Mouchinette– we have more than raubled our waste treatment capacity during his time, installed a new water pump, installed new solar panels, and increased the visibility of the “red” and “green” safety zones.

And people’s perceptions are changing too as SOIL grows- Milien said that people in the area are used to SOIL’s work now, and they “don’t fear poop like they used to- now they all want to visit Mouchinette!” 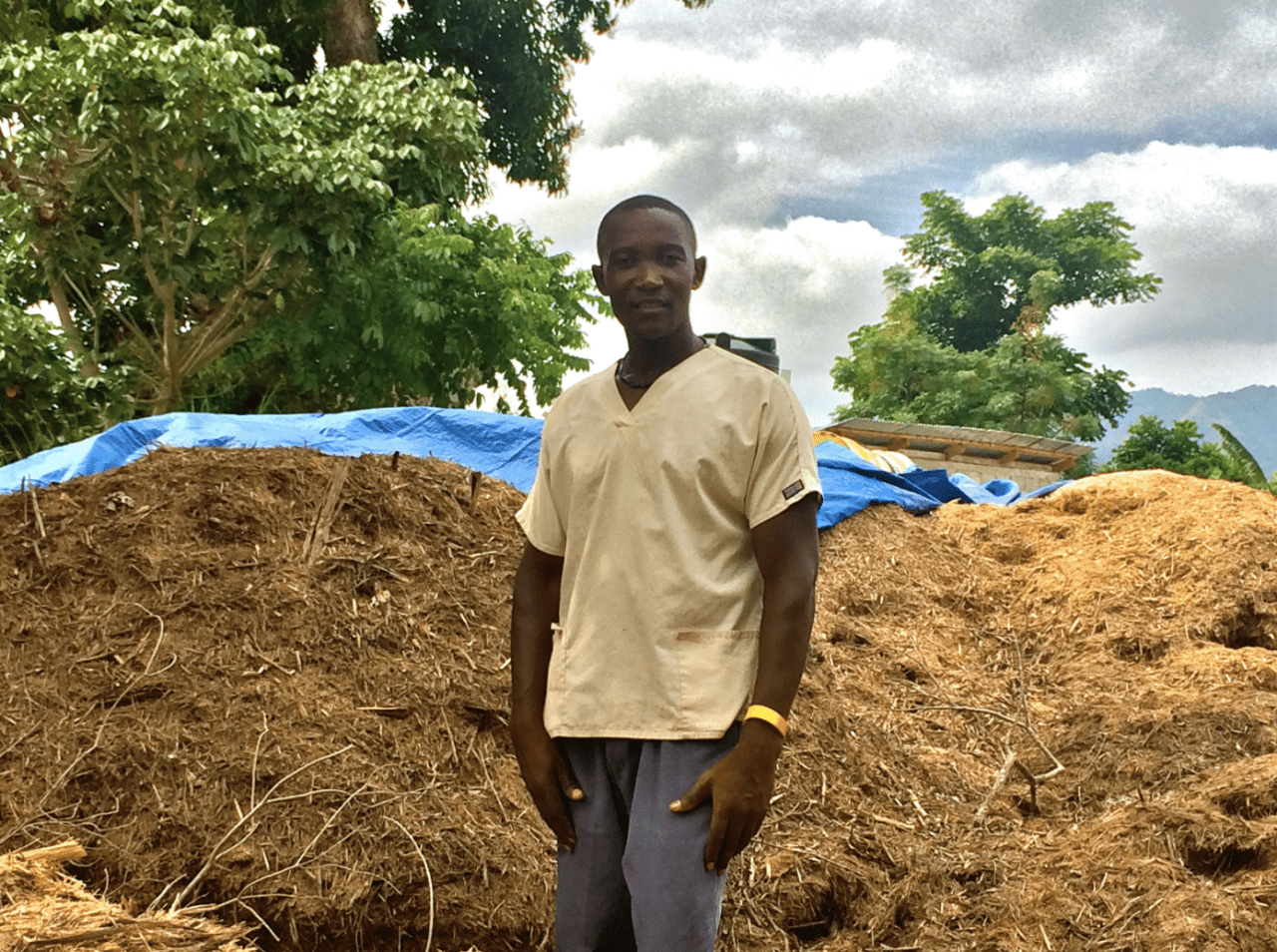 Peterson worked as a shop owner and a security guard before joining SOIL in 2012. What he values most about working with SOIL is the level of professionalism and diligence that the staff maintains.

He said that people used to be so afraid even to talk about poop, even before the cholera outbreak. Now, he says, a lot of people know about SOIL and know that our work turns poop into something that is safe, and actually good for the environment! “Everyone is cool with SOIL now, and I’m not afraid anymore because I know how to turn waste into compost.”

I asked Peterson if he had any last remarks he’d like to make. He said, “SOIL has grown so much, and we’re still growing. We need more ‘backup’ from our international supporters so that we can make an even bigger difference in Haiti.” 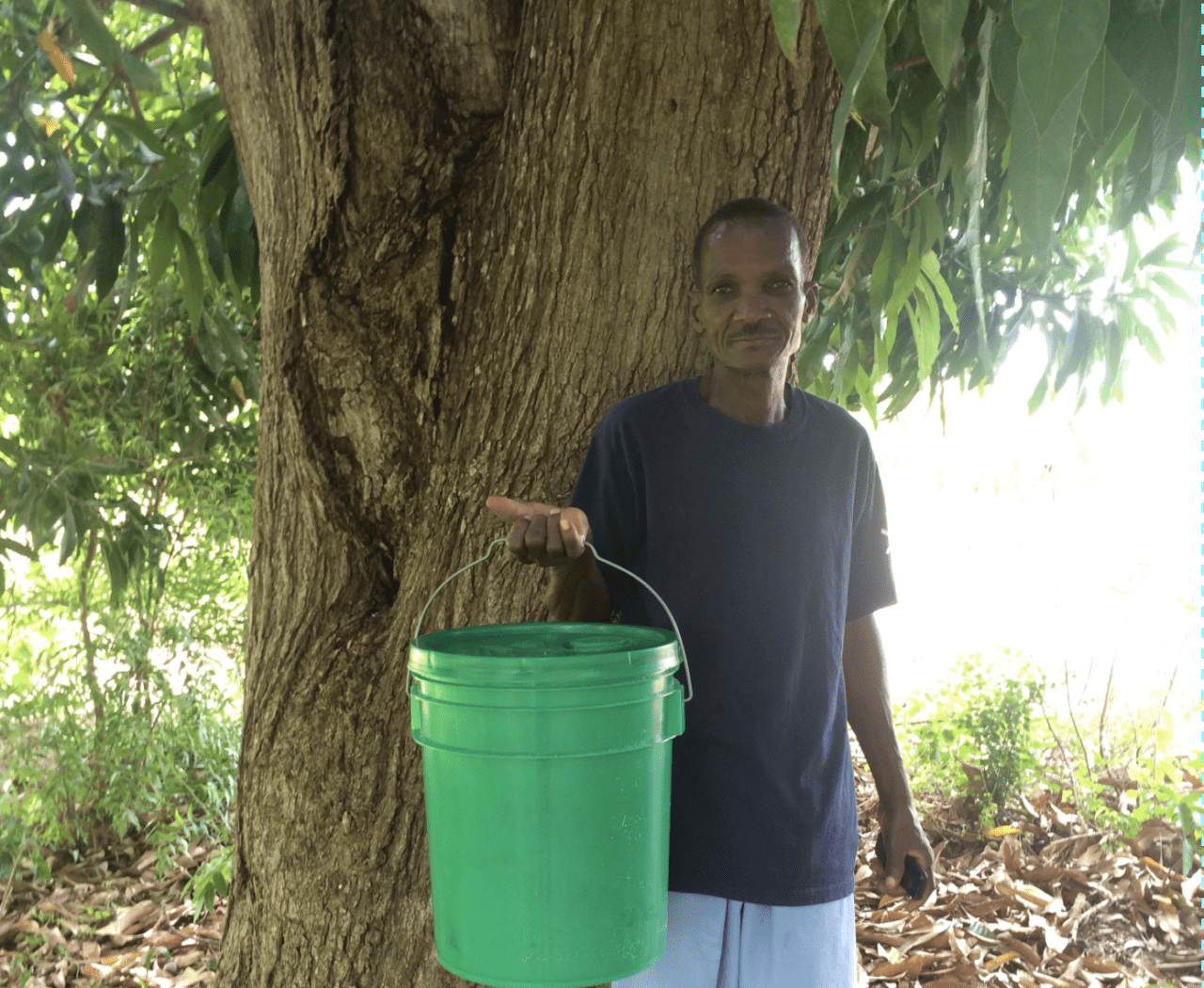 Andre has a small frame and a big heart. He lives nearby Mouchinette, has seven children, and has worked for SOIL since 2013. He echoed Milien’s comments by saying “when I first came, Mouchinette was tiny. Now it’s getting huge! This isn’t a game we’re playing here—this is serious!” He said that while it used to take two and a half weeks to fill up a compost bin, they’re filling the bins up every four days.

Andre said that it’s through teamwork that makes it possible. “We’re a collective. We accomplish everything as a group.” 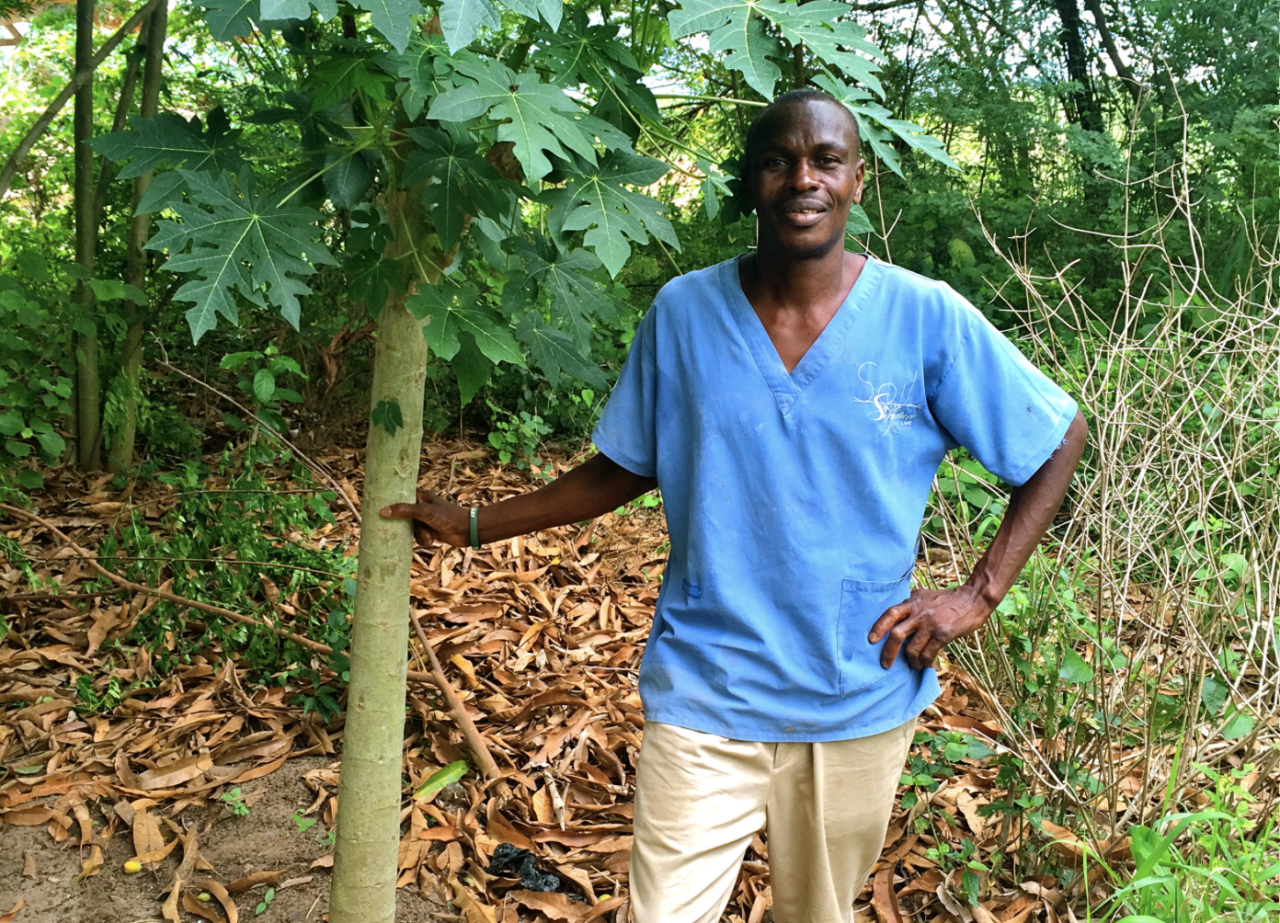 I started out by asking Wilfred Pierre, also known as “Douz,” where he got his nickname. He held out his hand and showed me that his last two fingers are joined together. He said that he was born that way, and other kids started calling him his nickname because of it. I didn’t quite get it since “douz” means “twelve,” but either way I liked hearing him talk about his childhood.

Now Douz has four children of his own and lives nearby Mouchinette. When I asked him the most difficult thing about working on the compost team, he responded that the biggest difficulties usually have solutions, and he’s here to work hard anyway. He did say that it’s tough when something unexpected happens during the week and he has to work overtime during the weekend instead of relaxing with his family.

I asked Douz if he had anything else to add. “I love SOIL. I’ll always love SOIL.” 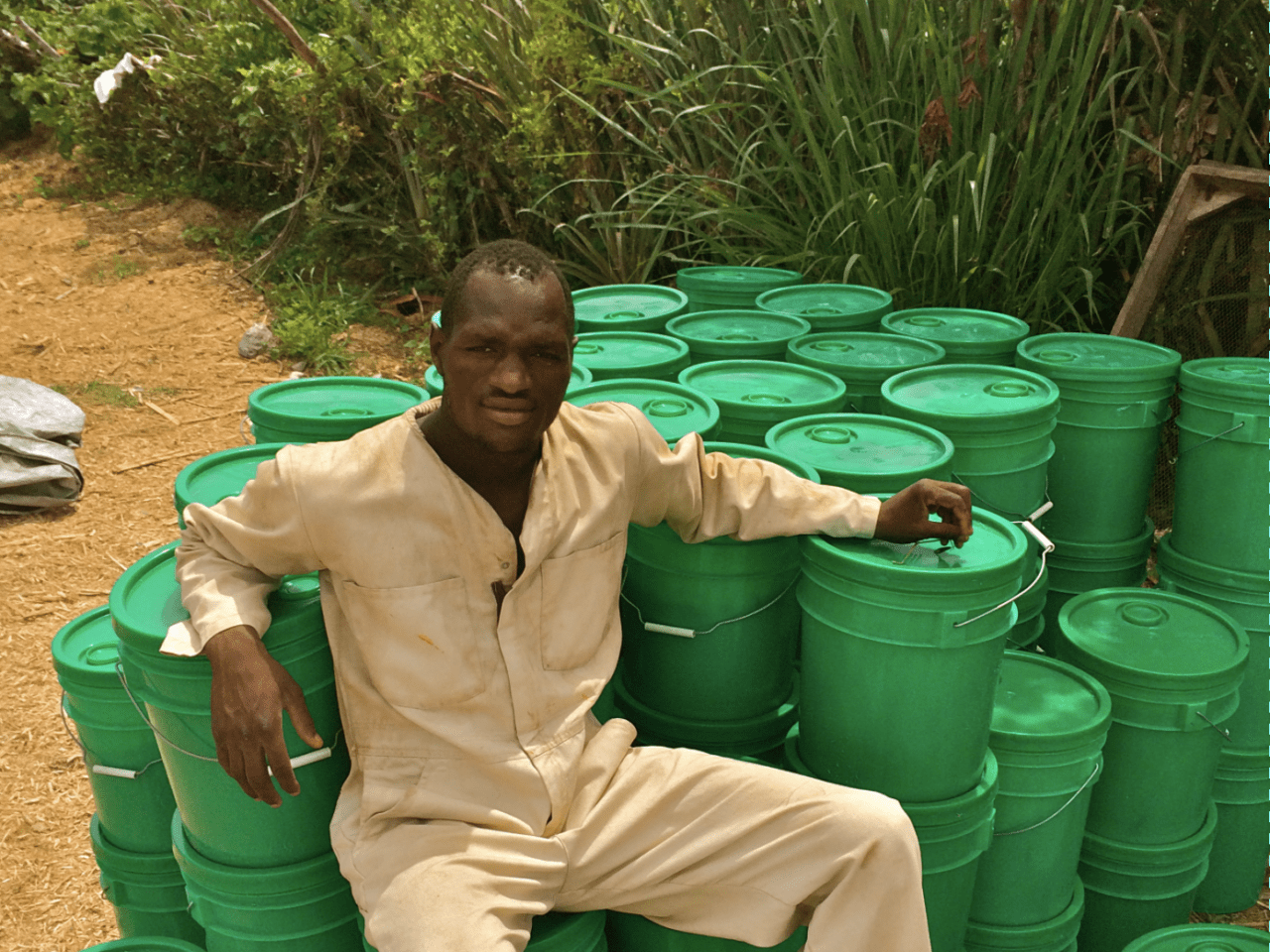 Dorat is so grateful to work for SOIL since all he had before were small jobs on the side. His second child is on the way, so he can use all the job security he can get!

Before he worked for SOIL, Dorat lived at a home for boys. He said there was an American woman there who used to give him food. One day he explained to her that, although he was so grateful for the kindness, what he really wanted was to learn a trade for himself. She connected him with SOIL and we’ve had a wonderful member of the SOIL family ever since!

Dorat said that he knows a lot about sanitation and hygiene now, as well as making compost of course, and that he’s glad to have this important life-long knowledge. 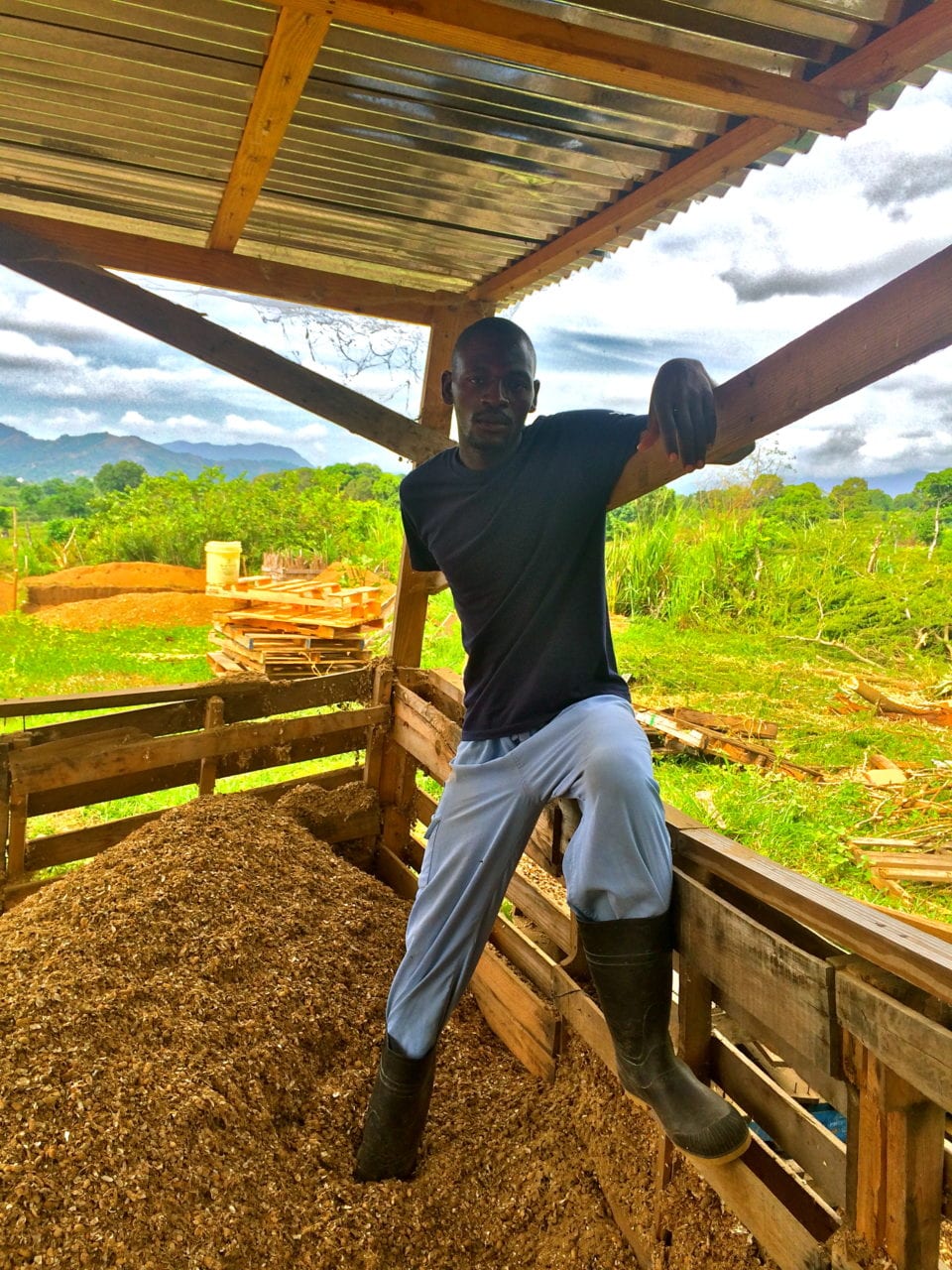 You may remember Tidou from an earlier blog post. Tall, extremely polite, and with a confident yet friendly attitude, he is a bright and dedicated member of the SOIL team. He is always looking to practice English, and he works on the side as a Creole tutor to foreigners. Unsurprisingly, he says that he loves working for SOIL because of the emphasis on staff development (at nearly every staff meeting, our Regional Director Theo talks about the importance of cultivating new skills and knowledge). This clearly sticks with the guys at Mouchinette, as Tidou and others mentioned that they have gained new knowledge that will be helpful for life beyond SOIL.

Tidou says that he feels very respected within SOIL, because everyone is treated as equal. Internally, I sighed in relief to hear this, since I am in charge of implementing many HR policies. But he didn’t mention how the minimum salary was raised significantly in the last year, as I thought he would. He didn’t mention the time each Director took to carefully explain employees’ rights and responsibilities in the new human resource manual. Instead he remarked that in the office, we don’t have separate plates or cups for the manual workers and the office staff. It really struck me that that sort of practice would still be happening in contemporary Haiti. No organization should get a pat on the back for treating their staff with basic respect! “Sure,” Tidou said, “but this is Haiti, and that kind of thing happens all the time.”