New York Times: Can Dirt Save the Earth? 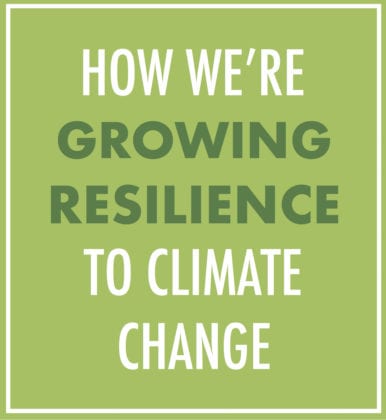 “To prevent carbon from causing misery and destruction, perhaps we just need to change its location. Perhaps we can find a way to pull it from the air and restore it to the earth,” writes the New York Times in a new article that features the research of SOIL’s longtime collaborator, Dr. Rebecca Ryals. The article documents recent groundbreaking studies into how improving the health of soil through compost amendments may be one of the most promising tools we may have at our disposal to combat climate change.

SOIL has worked with Dr. Ryals for years to better understand how, by producing nutrient-rich compost, SOIL’s ecological sanitation systems are combatting climate change and increasing resiliency to natural disasters.

Keep a close eye on the blog later this spring for exciting new data we have to share from Dr. Ryals’ research and in the meantime, visit this page to learn more about how SOIL is increasing resiliency to climate change in one of the most climate vulnerable nations in the world.

From the New York Times

Why Sequestering Carbon in Soil is Critical

“According to the 2014 report by the Intergovernmental Panel on Climate Change, an authority on climate science that operates under the auspices of the United Nations, humankind also needs to remove some of the carbon already in the atmosphere to avoid, say, the collapse of polar glaciers and the inundation of coastal cities worldwide. ‘We can’t just reduce emissions,’ Keith Paustian, a soil scientist at Colorado State University and an author of an earlier I.P.C.C. report, told me. ‘It’s all hands on deck. Things like soil and land use — everything is important.'”

“Instead of relying solely on technology to remove greenhouse gases from the air, we could harness an ancient and natural process, photosynthesis, to pump carbon into what’s called the pedosphere, the thin skin of living soil at the earth’s surface. If adopted widely enough, such practices could, in theory, begin to remove billions of tons of carbon dioxide from the atmosphere, nudging us toward a less perilous climate trajectory than our current one.

“California has about 56 million acres of rangeland, the single largest type of land use in the state. If compost made with manure was applied to just 5 percent of that area, they calculated, it would offset emissions from about 80 percent of the state’s agricultural sector — all the cows raised, crops grown, fertilizer applied and tractors driven in California.”

“As a carbon-farming tool, compost bears some notable advantages — namely, it works both preventively and correctively. Composting prevents emissions from the starter material — manure, food scraps — that, if allowed to decompose, might emit potent greenhouse gases. (About one-fifth of United States methane emissions comes from food and other organic material decomposing in dumps.) By enhancing plant growth, it also aids in removing carbon from the atmosphere, a corrective process. And because the carbon in nearly all organic material was originally pulled from the atmosphere during photosynthesis, compost that enters the soil represents the storage of carbon removed from the air earlier — the grass eaten by cows that became manure, or the trees that became wood chips — and at a different location. That, too, is corrective.”

No Replies to "New York Times: Can Dirt Save the Earth?"