**  This post is a modified essay that was originally published in the online literary magazine Drunken Boat.  We hope this will give our supporters insight into SOIL’s guiding principles and we thank Drunken Boat and Ashoka Changemakers for encouraging us to philosophically reflect on why we do the work we do.**

Sustainable Organic Integrated Livelihoods  (SOIL) is an organization based in Haiti that was founded in 2006 with a mission of ensuring nutrients for all through the transformation of wastes into resources, or more precisely by turning poop into soil.  We believe that the key to equitable access to nutrients in a world filled with inequality is to empower communities to harness the power of ecological processes to transform a dangerous pollutant into a valuable resource.

SOIL was founded on the philosophy of liberation ecology: every human being has the right to health and happiness and waste does not exist either in social or ecological systems. We have found that the most direct way to implement this philosophy in the communities where we work is through a technology called ecological sanitation, whereby human wastes are converted into fertile soil by naturally occurring soil microbes. Although SOIL’s projects focus on the intersection of sanitation and agriculture, the roots of our work go far beyond the technology.

In nature soil transforms organic matter, sustaining ecological systems by converting one organism’s wastes into another’s resources. It is from the soil that our organization has borrowed both our name and our philosophy. We too, believe that the path to sustainability is through transformation, of both marginalized people and discarded materials, turning disempowerment and pollution into participatory production.

Though rooted in ecological principles, the social element of our philosophy has also been deeply influenced by the liberation theology movement. SOIL is not a religiously based organization but we do borrow many of our principles from liberation theology, a school of thought, developed among Latin American Catholics, according to which the Gospel demands the church to liberate the people from poverty and oppression.

Liberation theology in practice is based on a sincere faith in humanity and a willingness to stand with the poor in their struggle for justice. Justice implies more than a short-term fulfillment of needs based on dependency. It implies a commitment to social change whereby the poor are liberated from their suffering in this lifetime through active participation in, and transformation of, their reality.

The concept of waste presents an important parallel between ecology and liberation theology, and it is at this intersection that SOIL’s philosophy of liberation ecology is based. The dictionary defines waste as leftover or superfluous, rejected as useless or worthless. Both ecological theory and liberation philosophies challenge this traditional concept of waste, through the idea that all that exists is transformable. In ecological systems one organism’s waste may nourish and sustain an entire food chain through a series of molecular transformations. Liberation theology shares this conceptualization of waste at the social, rather than biological level. It is a school of thought, which recognizes the humanity and worth of every person, affirming the capacity of those who have been marginalized and oppressed.

In a world where development aid has often served to reinforce social divisions, there is a need for a development ethic that inspires practitioners to look beyond aggregate statistics, to focus on what is happening to the most threatened and marginalized human beings who will generally be found living in similarly threatened ecosystems.  SOIL argues that the philosophy of liberation can provide such an ethic.

The primary characteristic that distinguishes liberation ecology from other ecological and development approaches is that it advances a research agenda grounded in the struggle for social and economic rights, in recognition of the connections between poverty and environmental destruction.  Social and economic rights are seldom the focus of human rights discourse, but a discourse of liberation argues that inequitable access to resources is as relevant to the human rights discussion as physical violence. According to the principles of liberation ecology, the fact that the poor have an increased risk of dying, from preventable disease or lack of resources stemming from environmental degradation, constitutes a human rights violation.  The fact that the nutrients required for human health are not equitably available to all constitutes a human rights violation. Liberation ecology recognizes the fundamental connections between poverty and environmental destruction, and seeks to intervene in this vicious cycle by actively engaging in critique of the sociopolitical structures that maintain this dangerous interplay.

In practice this approach requires that development initiatives be built with a knowledge and appreciation of the historical forces that created the conditions which the initiative seeks to alleviate. For this to happen practitioners must be able to engage in genuine interactions with the communities that they are serving, they must learn to speak the language and make efforts to understand the culture and history of the country.

Sadly, in Haiti many development workers never have a chance to develop these genuine relationships.  Exaggerated security restrictions and work conditions that do not facilitate learning of the language and culture have created a community of aid workers that remains largely isolated from the majority of Haitians.   High staff turnover and agendas dictated by foreign donors make it challenging to integrate a socio-historical perspective into development projects and, as such, good technologies often fail due to complex social issues not considered in the project planning phase.

Although SOIL is a small organization, with a limited reach, we are grateful for the freedom that comes with being locally based.  We are thankful that we can take the time to ensure that our international staff has an appreciation of the communities in which we work, allowing us to tailor our projects to the needs of these communities.  And most of all we are proud of the fact that the SOIL team (now 67 Haitian staff, 5 international staff and volunteers and supporters throughout the world) is united by our shared love for Haiti and our commitment to the philosophy on which SOIL was built.

We believe that everyone has the right to access the nutrients needed for survival and we dedicate our work to ensuring the equitable distribution of nutrient resources by building local capacity to recycle and reuse nutrients available within their communities, creating livelihood opportunities throughout the cycle. We believe in a world of livelihoods and nutrients for all! 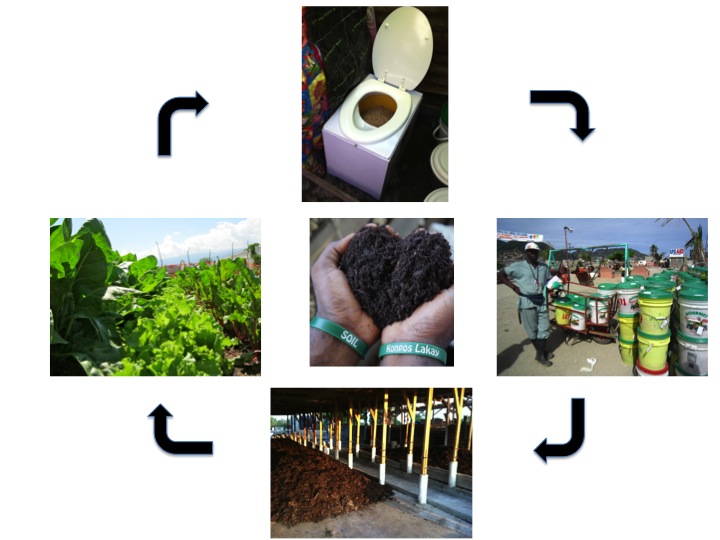 Wastes from SOIL's specially designed EcoSan toilets are collected regularly and transformed into rich, agricultural-grade organic compost at one of SOIL's waste treatment facilities. The compost is then used to rehabilitate Haiti's fragile agricultural ecosystems, fighting malnutrition and poverty.