SOIL is proud to announce that SOIL’s Co-Founder and Executive Director, Dr. Sasha Kramer, was selected as a 2014 Schwab Foundation Social Entrepreneur of the Year. Every year the Schwab Foundation for Social Entrepreneurship selects 20-25 social entrepreneurs achieving transformative social and/or environmental change through the application of innovative and practical approaches to benefit society in general, with an emphasis on underserved populations.

In recognition of Sasha’s groundbreaking work developing new social business models for the ecological and financially sustainable provision of sanitation services in some of the world’s most impoverished communities, Sasha was selected to join a global network of Schwab Social Entrepreneurs.

A Social Business Model for Sanitation 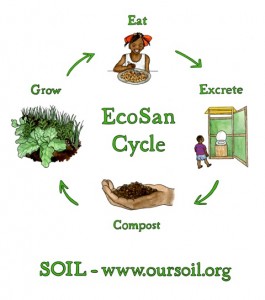 SOIL is currently developing and implementing a transformative new social business model for the economically sustainable provision of household sanitation services and ecological waste treatment in Haiti. The world is experiencing a global sanitation crisis and the majority of available sanitation technologies have prohibitively high start-up costs, are dependent on scarce water resources, and are financially unsustainable. In SOIL’s simple social business design, wastes from ecological sanitation (EcoSan) toilets are collected and transported to a composting waste treatment facility where the waste is safely transformed into rich, agricultural-grade compost. This compost is then sold for agricultural application, improving both the fertility and water retention of soil. Revenue from monthly toilet user fees, waste treatment fees, and compost sales are collected to support ongoing project costs and to showcase the private sector potential to affordably and sustainably provide sanitation services in the world’s most impoverished and water-scarce communities.

This innovation is critically needed as access to improved sanitation remains one of the most under-realized Millennium Development Goals (MDG) set by the United Nations, with 2.5 billion people (36% of the global population) still lacking access to a toilet (WHO/UNICEF, 2013). An additional concern is that waste treatment is often overlooked or considered a secondary intervention. An estimated 4.2 billion people do not have access to a sanitation system that includes waste treatment (Baum et al., 2013). As a result, the majority of human waste around the world is dumped untreated directly into waterways or to left in underground reservoirs that often leach into groundwater. The lack of affordable waste treatment options not only results in contamination of water supplies with dangerous pathogens, it also represents a significant loss of nutrients and organic matter that could be used to improve soil quality and water retention.

While aquatic ecosystems are becoming increasingly polluted with nitrogen from human waste, the soils of many developing countries exhibit rapidly declining fertility, reducing agricultural production and leading to poverty and malnutrition. It is estimated that more than 75 billion tons of soil are lost annually to erosion (Lal, 1998) and global food production in many countries has slowed, stagnated, or collapsed (Ray et al., 2012). Additionally soil degradation has a direct effect on water resource management as degraded soils are unable to retain water and are more susceptible to drought (UN, 2013). Integrated solutions to sanitation and soil restoration are desperately needed.

SOIL’s work is unique in that it is one of the largest and most promising tests of the paradigm-shifting hypothesis that sanitation no longer needs to focus on waste disposal, but rather on the economically-profitable nutrient capture and agricultural reuse of human waste. SOIL’s model is one of the few interventions around the world that has showed early success in creating a financially-sustainable sanitation service that eliminates the need for waterborne sewage systems and produces an endless supply of safe, agricultural-grade compost to increase soil water retention and improve food security.

“Social entrepreneurs are an integral and increasingly sought after community of the World Economic Forum. We are seeing greater appetite among business, government and civil society leaders to learn from the innovative models of social entrepreneurs and collaborate with them in novel ways. We welcome the 2014 Social Entrepreneur of the Year Awardees who epitomize the best this sector has to offer.”
– David Aikman, Schwab Foundation Managing Director and Head of the New Champions Communities

“Traditional approaches to aid, particularly in the sanitation sector, have proved unsustainable in the absence of ongoing donor support. We believe that the key to implementing sustainable sanitation interventions is through the creation of livelihood opportunities. The challenge of social entrepreneurship is striking a balance between ensuring that everyone has access to the basic human right of sanitation while introducing business principles geared towards enhancing project longevity.”
– Sasha Kramer, Executive Director, SOIL

Sasha plays the role of a toilet in an educational workshop at the opening of a new SOIL toilet in Port-au-Prince.

Dr. Sasha Kramer is an ecologist and human rights advocate who has been living and working in Haiti since 2004. She received her Ph.D. in Ecology from Stanford University in 2006 and co-founded SOIL the same year. Sasha is an Adjunct Professor of International Studies and Visiting Scholar at the Centre for Latin American Studies at the University of Miami. She is also a National Geographic Emerging Explorer and an Architect of the Future with the Waldzell Institute. 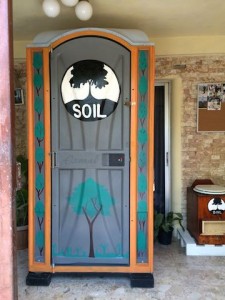 A SOIL composting toilet made from a converted port-a-potty.

SOIL promotes dignity, health, and sustainable livelihoods through the transformation of wastes into resources. In support of this mission, SOIL primarily focuses on promoting the community-identified priority of ecological sanitation (EcoSan), a process by which human wastes are converted into valuable compost. EcoSan simultaneously tackles some of Haiti’s toughest challenges by providing sanitation to people who would otherwise have no access to a toilet and producing an endless supply of rich, organic compost critical for agriculture and reforestation. Working with communities to design and test ecologically and socially beneficial solutions, SOIL implements low-cost technologies that are simple, easy to replicate, require minimal water, and provide safe and dignified access to sanitation.

Since building Haiti’s first EcoSan toilet in 2006 and first waste treatment facility in 2009, SOIL has gone on to become one of the country’s most well-respected non-profit organizations. SOIL’s EcoSan waste treatment facilities (in Cap-Haitien and Port-au-Prince) now treat more than 20,000 gallons of human waste per month, providing a powerful example of how to affordably and effectively increase access to sustainable sanitation services worldwide. Visit www.oursoil.org to learn more and join us on Twitter @SOILHaiti or on Facebook at Facebook.com/SOILHaiti.

About The Schwab Foundation for Social Entrepreneurship:

The Schwab Foundation for Social Entrepreneurship is a not-for-profit, independent and neutral organization, founded in 1998, with the purpose to advance social entrepreneurship and to foster social entrepreneurs as an important catalyst for societal innovation and progress. The Foundation is under the legal supervision of the Swiss Federal Government and is headquartered in Cologny-Geneva, Switzerland. Visit www.schwabfound.org to learn more and join the conversation on Twitter @schwabfound @davos @WEF. Use the hashtags #WEF and #SEOY14.
.

Media inquiries should be directed to: