“Development of sanitation systems is considered one of the greatest improvements in public health over the last century. But despite advancements, 2.5 billion people around the world still live without adequate sanitation facilities. The resulting impacts from fecal matter contamination are significant, detrimentally affecting both human and environmental health. Today, most of us in developed countries do not think twice about where our “waste” goes once we flush the toilet, thanks to the development of municipal sanitation systems by which large cities are able to flourish without devastating disease outbreaks. While effective sanitation systems can help maintain human and environmental health, places like Haiti still lack these improvements.

“In places like Haiti where there are few flushing toilets and no municipal waste treatment options, the impacts of sanitation system solutions are enormous. One such solution developed by the US 501c3 non-profit organization Sustainable Organic Integrated Livelihoods (SOIL), challenges our concept of “waste” by redefining it as a “resource.” SOIL employs a method called Ecological Sanitation (EcoSan), whereby human waste is effectively collected, treated, and reused for agricultural production. SOIL built its first EcoSan toilet in Haiti in 2006, the first full waste treatment facility in the entire country in 2009, and has since become a key innovator in the field of sustainable sanitation. The SOIL toilets do not use water to function, and thousands of gallons of human waste that would otherwise end up untreated are instead composted. Furthermore, SOIL operates under World Health Organization (WHO) standards to control thermophilic composting conditions, a process that eliminates disease-causing pathogens like cholera.” – Monika Roy, Ramen IR, June 15, 2015. Read the full article here. 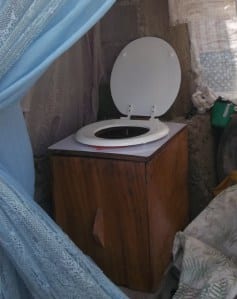