Today the SOIL team was thrilled to present Marie Mineuve Felissant, one of our public toilet managers, with an award for excellent work and exceptional commitment to SOIL’s mission of providing safe and dignified sanitation to people throughout Haiti. Ms. Felissant manages one of the SOIL toilet blocks in the Kan de Viktim IDP camp in Port-au-Prince. Originally from Jeremie, Ms. Felissant’s extended family remains in the southern city, while she and one of her young daughters reside in the capitol. Prior to the 2010 earthquake, Ms. Felissant was working as a housekeeper, for a woman in Port-au-Prince. However, her home was destroyed in the earthquake, and Ms. Felissant moved her family into the Kan de Viktim site and quickly began working as a SOIL toilet manager. 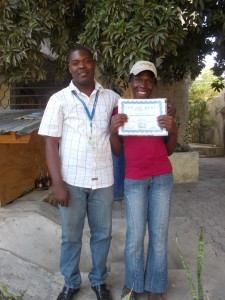 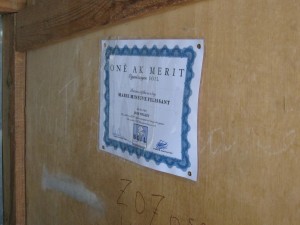 Marie Mineuve Felissant's Certificate of Achievement now hangs on the wall of the toilet she manages in Kan de Viktim.

No Replies to "Recognizing a Community Health Hero"