A few folks have written in to SOIL about the tragedy in the Philippines. Like you, we’re saddened and horrified by the catastrophic loss of life in the aftermath of Typhoon Haiyan. Though we’re on the other side of the globe, the tragedy of an epic disaster hits all too close to home here in Haiti.

Haiyan has reminded us yet again that the enormous death toll from these natural disasters is a decidedly unnatural phenomenon – one that exists due to the global disparity of wealth and power. Because developing countries lack the resources of wealthy nations to implement warning systems, building codes, and other protective measures, disasters that would be merely expensive in the US are horrific in places like Haiti and the Philippines.

Unfortunately, as Andrew Revkin notes in “The Varied Costs of Catastrophe,” many organizations have historically focused on responding after these catastrophes without prioritizing efforts to prevent them. However, agencies like the World Bank are increasingly interested in how “social protection, disaster risk reduction, and climate change adaptation can unite forces to help poor people better manage climate and disaster risk.”

We’re proud to say that these goals have long been part of SOIL’s work in Haiti. 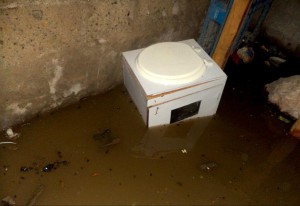 A SOIL toilet keeps waste safe and secure during a flood.

SOIL is also partnering with the American Red Cross and the World Wildlife Fund in Haiti to share these techniques. During the first day-long training in August, and additional sessions planned for this winter, SOIL hopes to spread these methods of disaster preparedness in Haiti. We’ve also shared our knowledge with organizations and individuals in over sixty different countries, including the Philippines, through our Guide to Ecological Sanitation.

While these may seem like small efforts against the backdrop of an enormous tragedy, we believe that our continued efforts will make a difference and save lives.

If you want to help with Typhoon Haiyan recovery, please consider supporting WAND’s efforts to provide emergency sanitation during this crisis.

No Replies to "Responding to Typhoon Haiyan"