SOIL in Africa Part 2: Into the Toilet

Today we had one of the highlights of our professional careers, or at least it was one of my finest hours.  In an attempt to demonstrate the possibility of converting human waste into compost the SOIL team, together with our hosts ADESCA, paid a visit to the local primary school.  But this was not your usual school visit.  We were looking for proof that human wastes can be transformed into soil, and what better place to find that proof than deep in the ground in an old latrine.  Because the conversion of poop to soil can take at least a year, and we are only here in Benin for 3 weeks, we thought the best way to show that the process works would be to excavate an old latrine that had been closed for at least one year.  After some research we learned that the local primary school had a set of latrines that have been sealed for the past 4 years.  We went out on a limb and did something that we have never tried before, climbing down into a latrine and digging in to see what sorts of riches might await us. 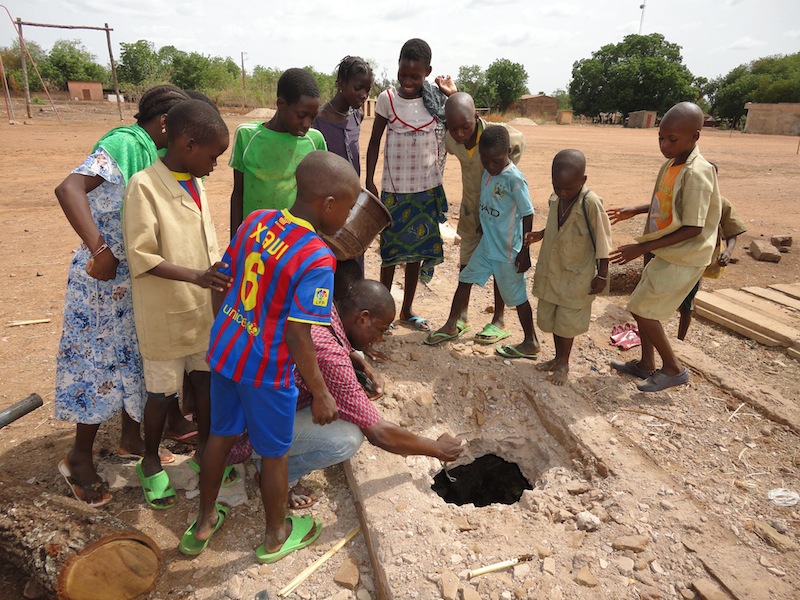 Can you spot Sasha and Bobo in this picture?

Usually when one thinks of exploration, one imagines traveling into an unknown jungle, discovering rare animals and plants, or diving into the depths of the sea.  This was quite a different type of exploration indeed, but for the SOIL team this was breaking new ground.  When we arrived at the school a local mason had already broken the cement slab leaving a hole with a 2 foot diameter, just big enough for little people like Bobo and I to climb in.  I arrived a few minutes after Anthony and Bobo, and Bobo was nowhere to be seen.  In his enthusiasm he had already disappeared into the small hole and was 3 feet below the surface digging away.  With Anthony wielding the video camera and an audience of young children rapidly gathering around the old latrine I called out to Bobo and lowered myself into the pit to join him.  Below the surface it was quiet and cool and Bobo had already burrowed through the surface layer and indeed struck gold!  The pit, once filled with fresh human wastes, was now a chamber of rich black soil, a color and consistency that was in stark contrast to the dry red dust of northern Benin.  As Bobo furiously shoveled away, I scooped handful after handful of rich humus into a bucket and, to the amazement of the crowd above, we sent up the first bucket of beautiful soil.  We had planned to only bring back one bucket to the office, but when we saw (and smelled) the fertile soil that filled the pit, we filled bucket after bucket, sending them to the surface, and soon we had a pile of black soil near the hole.

After about 30 sweaty minutes of digging we decided that we had enough soil to plant an experimental garden at the ADESCA office and Bobo and I emerged from the pit to wild cheers from the children at the school.  Everyone was standing around the pile of soil in awe, some hesitantly taking handfuls and sniffing it, amazed at the complete transformation.  Before long Anthony had all of the kids chanting “compost, compost!” and we filled our rice sacks with the booty and headed back to the office to plan the garden of corn that we will plant tomorrow.

Since this was the first time the SOIL team has attempted this sort of demonstration we were well aware that the results could go either way.  If what we had found below the surface was stinky poo, that could have been the end of our ecological sanitation experience in Benin, no one would have believed that poop could be transformed into SOIL and Bobo and I would have been washing ourselves for days trying to remove the smell.  But thank goodness mother nature is so reliable when it comes to decomposition and transformation.  Instead of a disaster, we made great strides in convincing the local community that human wastes are not wastes at all, but a valuable resource that, when treated properly, has the potential to revolutionize local agriculture.  The next step is demonstrating that potential in the office garden.

See all the photos from the day on SOIL’s Flickr page and… stay tuned for the results! 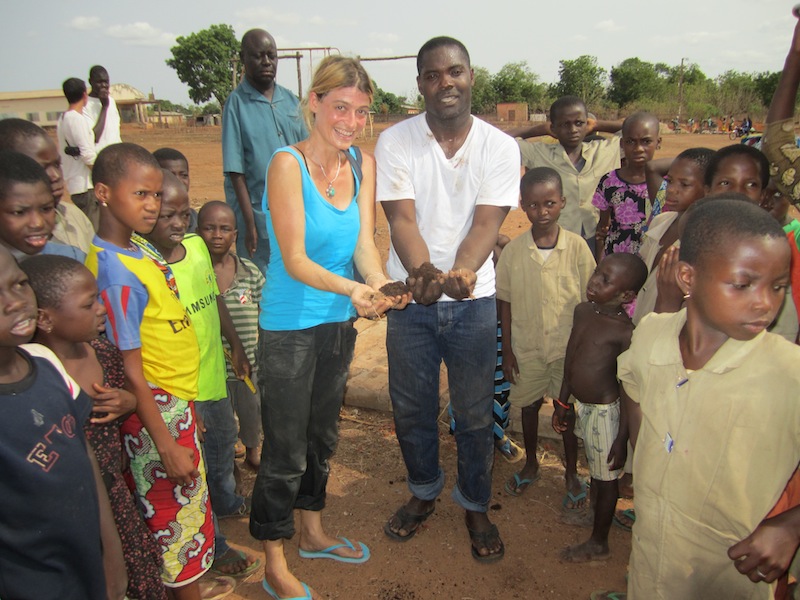 Sasha and Bobo show off their treasure

2 Replies to "SOIL in Africa Part 2: Into the Toilet"