For the next 3 weeks a SOIL team will be working in Benin, learning more about the culture here and constructing the first of 3 ecological toilets in a rural area in the northern region of Kalale in collaboration with a local organization ADESCA and their international partner SELF. This trip is thanks to the Blackstone Ranch Institute which offers a challenge grant for the most innovative new projects proposed by two or more National Geographic Emerging Explorers. This year the grant went to Sasha Kramer of SOIL, Jennifer Burney who works with SELF on solar powered irrigation systems in Benin and Dino Martins who works on natural pest control in Kenya.  The collaborative project is to integrate SOIL’s ecological sanitation work and Dino’s natural pest control work into the farming communities in northern Benin where SELF has installed solar powered irrigation systems.

Late last night and early this morning the SOIL team arrived safely in Cotonou, the capital of Benin, after a grueling journey across the world, more grueling for some than others.  Anthony and Sasha had relatively simple itineraries, flying from Port au Prince to Guadeloupe to France on directly on to Benin.  Bobo on the other hand was unable to obtain a French transit visa (a common struggle for Haitians) and had to fly from Port au Prince to; Panama; Havana; Madrid; Casablanca; Lome; and finally to Cotonou – a journey which took nearly 55 hours!  Despite the challenging journey Bobo arrived in Benin looking as fresh as the moment he left Port au Prince.  In his words he “feels that he has come home to the land of his great great grandparents”.  Indeed, Benin was the birthplace of Haiti’s liberator Toussaint Louverture, who led the slave revolt which eventually defeated Napolean’s army and made Haiti the first free black republic in the world, leading the way for the liberation of slaves around the globe. 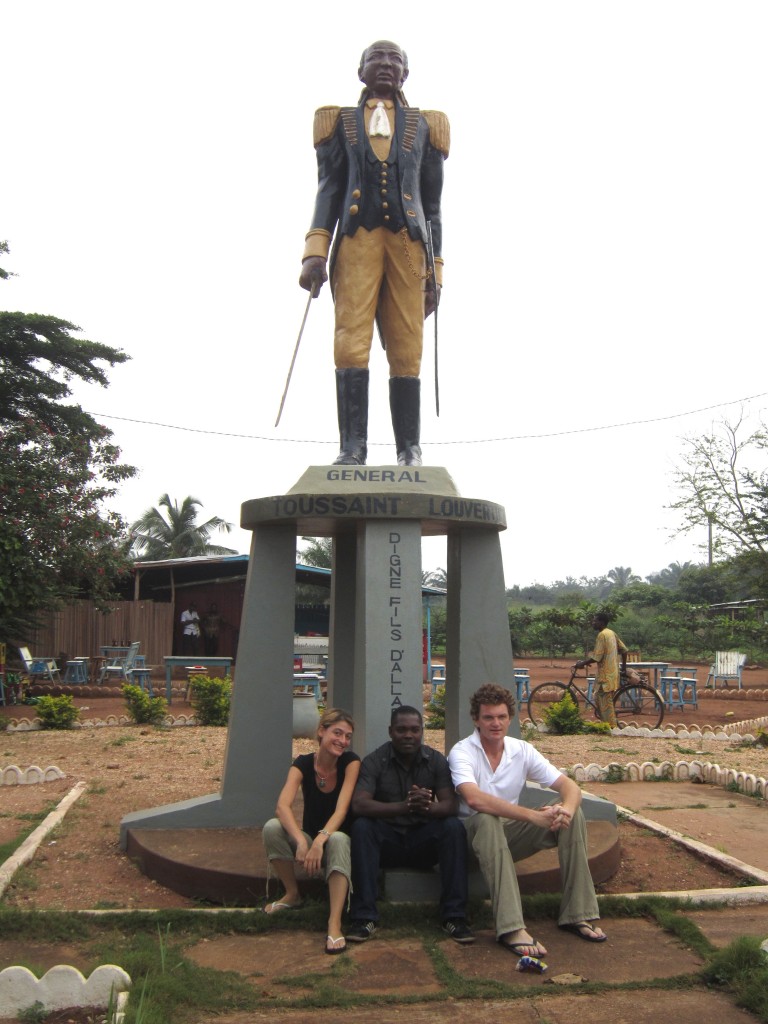 On our long journey to the north of the country we passed through Allada the village where Toussaint’s father was king.  In the center of the village is a plaza dedicated to the memory of Toussaint Louverture’s struggle in Haiti.  As Bobo stood beneath the statue he spoke of the sense of connection he feels in Africa.  When Toussaint was captured by the French and taken to a prison in France where he died in 1803 he said “When I die you will only have cut the tree of liberty but the roots are deep and numerous”.   Bobo’s visit to Allada shows that the roots that remained after Toussaint’s death have grown into a great forest and now the branches extend all the way back to Africa.

While we are delighted to be here to share our work, it is a true honor to be here with Bobo in the country of his ancestors.  To be able to see Benin through his eyes is an incredible gift.  Everywhere we go people are so touched to receive a Haitian, to be able to share a moment with someone from a country that has been an example to the world.  It is such a contrast to the way that Haitians are received in Europe or the United States.

We hope that you will follow us in our travels.

With love from Benin,