It is with great sadness that we share the news that a dear friend and colleague of ours Joseph Decius Derilus (known to us as Fre De) passed away on Sunday October 7 at a hospital in Port au Prince.  In August Fre De had a terrible accident in his home when a kerosene lantern tipped over and started a fire.  He and his only daughter were badly injured in the fire and quickly rushed to the Médicines Sans Frontièrs burn center in the capital.  His young daughter died during the first week of hospitalization and Fre De underwent numerous operations but sadly passed away after one month in intensive care.  This terrible accident is a reminder of the very real risks of structural violence and poverty in Haiti where people are forced to live under conditions in which something like this could happen. Fre De is survived by his wife and newborn daughter (born just one day after the accident), his mother, 3 brothers and 2 sisters. His funeral service will be held on Friday October 12th and on Saturday the SOIL team will gather to plant a tree in his honor.

Fre De was born in 1977 in the commune of Borgne, a beautiful region on the northern coast of Haiti.  As a young man he moved to Port au Prince where he continued his studies in Agronomy.  He began working with SOIL in February 2012 as an agricultural technician in our experimental gardens in Pernier.  All who knew Fre De will remember him as someone who shined with kindness.  He was always gentle and respectful and deeply dedicated to his work and family.  Fre De was well loved by all who had the honor of working with him and he will be sorely missed. 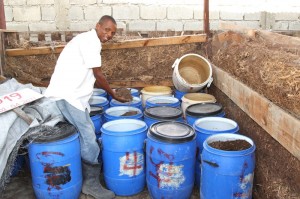 The SOIL team is so grateful that we had the opportunity to work with someone so passionate and dedicated.

No Replies to "SOIL Loses a Dear Friend and Colleague"