After a successful morning with the women of Dunkassa, Sasha, Bobo and I, accompanied by our ADESCA colleagues Zachary and Guninen, embarked on a road trip to Ouagadougou, the capital of Burkina Faso.

The purpose of our trip was to visit the African water and sanitation organization EAA / WSA (Eau et Assainisement pour Africa / Water and Sanitation for Africa), formerly known as CREPA. Sasha had first heard of the work of CREPA in 2005 whilst at an EcoSan conference in Durban, South Africa, and SOIL had long benefitted from their research and from their online publications. EAA are one of the most successful proponents of EcoSan worldwide with a presence in 22 African countries. It was time for SOIL to pay them a visit; to say thanks for their contribution to EcoSan; to exchange ideas and lessons learned; and to find out what they were up to and how they could help the new SOIL project in Benin. 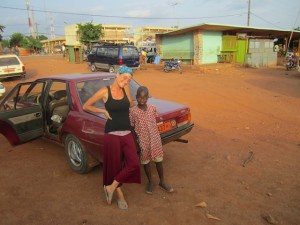 The red Peugot attracts attention on the streets of Natitango.

After 5 hours of travel on Monday, and a further 9 hours of travel of Tuesday, we finally reached our destination on Tuesday evening at 9 pm. We unfolded ourselves from the little Peugot (the experience in that car would never be forgotten), dusted ourselves down and collapsed into our beds as the sweltering heat of Ouagadougou defined the night.

On Wednesday, we awoke and made our way to the EAA Burkina Faso Headquarters opposite the National Museum. We were kindly received by the Country Director M. Adama Kone and the Projects Manager M. Joseph Congo. We soon settled in to a free exchange of knowledge and ideas and lessons learned and felt very much at ease with our EAA hosts. It was great to meet fellow EcoSan professionals who understood and followed the same principles as SOIL including: vigorous research of EcoSan technologies, transparency of knowledge as well as transparency of ignorance, strong community participation as essential in project planning, and an open-minded flexible attitude which recognizes that one solution does not fit all, and that nuances always exist and must always be respected. Above all, EAA believe in the importance of delivering affordable sanitation to poor communities: we felt like we were in good hands.

M. Congo then escorted us to one of the community managed waste treatment centres or centre d’hygenisation. This is where we would see how the wastes collected in the household EcoSan toilets of Ouagadougou would be treated, stored, and re-used. The centre we visited was in Secteur 27; a peri-urban residential area with small urban gardens belonging to individual households. The helpful staff welcomed us inside the compound and showed us around. We saw; the ‘huts’ for the hygenisation and storage of the treated faeces; the 1000 litre storage recipients for urine; and an example of an EcoSan latrine with a urine-diverting squatting slab. The actual finished compost was much dryer and dustier than that which we had exhumed from the latrine in Kalale, and that which we were used to producing in Haiti. An interesting discussion then ensued: 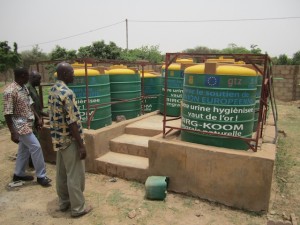 The Centre Hygenisation in Sector 27 receives dried and sanitized poop from 80 EcoSan toilets in the same arrondissement (neighbourhood) of Ouagadougou. The drying and sanitization is carried out for six months, inside the closed and sealed toilet chambers, and then for a further two months in the storage/drying huts at the centre. After each poop, the users add ash which desiccates the human waste in the chamber. Thus, the method for destroying the pathogens in the faecal matter is drying. SOIL uses another method for destroying pathogens: heating, or thermophilic composting. The SOIL method requires moisture, and requires organic matter, and therefore creates compost, and not dried sanitized faeces. The 2 methods each have their advantages and disadvantages, but it was very interesting for all to learn that there is more than one way to handle poop!

Another interesting discussion, always very close to SOIL hearts, concerned the financial sustainability of the project. We learned that the project was started in 2006, as a CREPA project financed by the EU. The project ended in 2009, when it was handed over to a community organisation called AONAZ (The acronym was spelt out in the local dialect which I missed) with a representative focal point in the local mayor’s office. Capital costs of the project were covered by the EU whilst the operational costs of the centre would be covered by sales of sanitized urine and faeces which would be used in the gardens. The centre was still operational, but it had been dealt a severe blow in 2009 by the flood that engulfed ‘Ouaga’ on the 1st of September 2009. 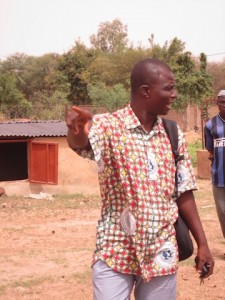 We would hear more about that flood during the course of the day, but it resonated deeply for the SOIL team because we were all too aware of the effects of disasters, natural and man-made, on development projects. In fact, as we sat amongst jerry cans marked “sanitized urine” and sacs marked “sanitized poop” in Ouagadougou, heavy rains were ravishing Haiti; flooding the streets of Cap-Haitien and soaking the 500,000 IDPs still living in tents in Port-au-Prince – the effects of the 2010 earthquake. Sadly, news of flooding in Haiti is now usually followed by news of the re-emergence of cholera; now being fought by fewer NGOs, and still claiming lives. We felt for Ouagadougou and empathized deeply with the hardships of development amongst a context of frequent disasters.

We concluded our Wednesday with Joseph Congo over lunch at the EAA HQ. Here we refueled at the excellent restaurant and chatted about what we had seen, as WASH (Water, Sanitation and Hygiene) professionals from all over Africa sat and discussed their own projects. It was great to feel the buzz emitting from within this recently expanded African organization, established by Africans and run by Africans. We will be watching EAA with great anticipation in the years to come, as they complete their process of restructuration and continue to find practical affordable solutions to water and sanitation problems in Africa, which we may all benefit from and perhaps replicate in Haiti.

On Thursday we once again contorted our bodies into the small red Peugot and headed home to Benin, via a small town to the west of Ouagadougou called Koupéla. Koupéla was home to another of EAA’s EcoSan projects, but this time a rural one, in the villages of Daltenga and Boangtenga. We had planned to shoot in and out of Koupéla, and not delay too much our journey back to Parakou, Benin. However, what we saw there would delay our return for three hours and make it hard for us to leave. 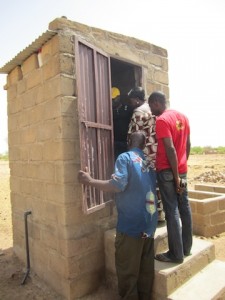 A stop along the toilet tour.

We were received in Koupéla by EAA’s Engineer Agronomist M. Marc Yaméogo, and his colleagues Mariam and David. Just as the previous day in Ouagadougou, we felt that EAA and SOIL had been to the same school of development, as Marc and his colleagues discussed their project using the same kind of language SOIL uses when describing its projects. The emphasis EAA placed on community participation in developing the projects together with the village communities was truly impressive, with communities being involved from the very first implementation stages of the ‘garden school’ which would demonstrate the effectiveness of using humanure compost as compared to chemical fertilizer. We also heard some genuine pearls of wisdom from the team’s experience on such diverse topics from granulation of urine (“which loses 80% of urine’s nitrogen content”) to sensibilisation tools when mobilizing communities to reuse their wastes (“the smell from urine is what characterizes its effectiveness, if your urine smells, then it is a good product”). Most comforting of all, was the patient approach that Marc followed in stimulating interest and demand for the EcoSan toilets: a two year training and sensibilisation period was undertaken before starting widespread coverage of the toilets in the villages. Patience, community participation, learning from mistakes – music to our ears!

After an hour of discussion in the office, we left for the village of Daltenga to see the toilets in action. Soon after our arrival at the village, we met with one, then two, then three of the village elders, and within minutes the was a crowd of 30 or 40 men, women and children who had come to see the visitors and show them around their toilets. We were immediately struck with the sense of pride that the village felt for their toilets, as they showed us around with great enthusiasm and interest, the components of the toilets with which we were by now very familiar; “Here, this hole is for the urine… This hole is for the poop… This hole is for the washwater from anal cleansing…. This is where we collect the urine… This is where we store and dry and sanitise the faeces…” Perhaps most comforting of all was that these toilets – designed and built by the villagers themselves – were nearly identical to the toilets that SOIL had been building in Cap-Haitien since 2006. Great Minds…

Under the shade of a large tree at the side of the village, we sat with the villagers and asked questions about their new toilets. We learned that every villager had, or was in the process of getting, an EcoSan toilet, the toilets were managed by the households themselves, the dried and sanitized faeces had lessened their dependence on chemical fertilizer, which in turn had helped them economically, and that the new organic fertilizer had boosted their crop yield by 40%. High praise all round for the new technology, and for the work of EAA. Finally, the village chief told us of his pride of offering his visitors the chance to use the new toilet and of his pride when other local villagers asked for the same project for their village. As the morning turned into the afternoon, our bodies began to prepare ourselves for the 9 hour journey ahead and we had to tear ourselves away from this outstanding EcoSan project and from the warmth and generosity of the village of Daltenga. Not even the invitation of home brewed beer by the chief’s wife could make us stay, but we felt surely that one day we must return to see how a magic toilet can not only give food, give health, give money, give dignity, but can truly transform a community, and empower its people.

See all the pictures, including a great social marketing poster for EcoSan toilets!, on the SOIL Flickr page.

No Replies to "SOIL Visit to EAA, Ouagadougou"