Can NGOs be a Vehicle for Sustainable Sanitation? A Case Study from Haiti

My name is Sasha Kramer and I am an ecologist who has been living and working in Haiti since 2006 as the Executive Director and Co-founder of SOIL, a non-profit promoting and researching ecological sanitation in dense urban areas.  Today I will not be speaking from the perspective of SOIL but rather as an active participant, observer, promoter and critic of the sanitation sector. Haiti captivated the world’s attention in January 2010 when an earthquake, which killed over 300,000 people, resulted in one of the largest humanitarian responses in history, casting a spotlight on a country that had arguably existed in a state of emergency for decades, particularly from a WASH perspective.  Even before the earthquake Haiti had the lowest level of sanitation coverage in the hemisphere, the highest rates of diarrheal incidence in the world, and was one of the only countries in the world where coverage declined from 1980 – 2000.  And all of this in the country with the highest number of NGO’s per capita in the world.

Although Haiti, as any other country, presents a unique and complex set of challenges, it also provides an excellent case study for gaining a better understanding of the role that international NGOs play in the WASH sector.  I have certainly learned a lot from Haiti and I continue to learn every day. I hope this talk will be a way for me to share some of the lessons I have learned from Haiti’s sanitation story, and open up a discussion about some of the underlying reasons that international NGOs have often failed those we work to serve. This workshop is an opportunity for us to all look at these failures honestly so that they can serve as the foundation for improving future interventions.

Time is short so I will focus on 3 unifying factors that have characterized unsuccessful WASH interventions in Haiti, which are relevant to humanitarian and development interventions worldwide. 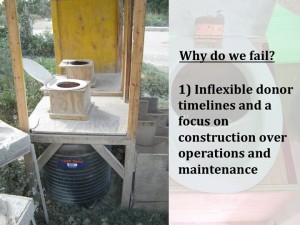 The first factor I am going to discuss which I believe plays a tremendous role in the failure of NGO-led WASH interventions, is restrictive donor timelines and a focus on construction over operation and maintenance.  This is particularly the case with emergency funding, but also plays a role in development interventions.  Government funding is available on an annual basis with the argument that it must be spent in a timely manner to justify future investments in the sector.  While appreciating the restrictions under which donors operate, it is also important to take a look at the implications the inflexible donor timelines have on community beneficiaries.

In Haiti I have witnessed hundreds of WASH interventions following disasters where substantial funds were made available to be spent over a period of several months.  This type of aid cycle may be effective for short-term food distributions or emergency medical interventions, but unfortunately WASH systems inherently require long-term operations and maintenance and to ensure the ongoing maintenance of a WASH system community engagement and long-term planning are critical.  Community outreach, which I will elaborate on more in my last point, involves social engagement with people, and human interactions are unpredictable and do not operate according to donor timelines. The bottom line is that the majority of WASH funding goes towards rapidly implemented construction projects; this approach to sanitation interventions results in massive spending in the sector, impressive implementation statistics for NGOs, and negligible positive outcomes for community beneficiaries.

The second factor that I would like to focus on particularly with regard to large international NGOs is the push for rapid large-scale implementation projects.  I have often wondered, and have asked many of my WASH colleagues if there is a country with excellent sanitation coverage, that has resulted from the intervention of international NGOs.   I will leave this as an open point for discussion over the next week, but I myself have never witnessed this.  Large-scale sanitation coverage that is effective over a long period of time is always provided by local actors, most notably the private sector, often with public sector involvement in waste treatment.  While it is impossible to deny the importance of large international NGOs in emergency response, I do think it is important for WASH professionals to ask the question of whether it is appropriate for international NGOs to engage in large-scale development initiatives in the WASH sector.  In Haiti one of the primary vulnerabilities in the WASH sector is dependence on international NGOs. 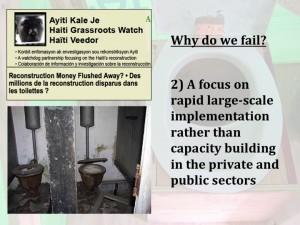 Would the money poured into large scale WASH interventions by NGOs not be better spent on capacity building in the private and public sectors and innovative research pilots by locally based groups?  This is a challenging question in that I have heard many of my respected colleagues say, “pilots, pilots, pilots – when are any of these going to be brought to scale” and while I agree that a pilot is only worthwhile if it can be brought to scale, I question whether international NGOs are the appropriate actors to bring innovations to scale.  On this point I will just leave you all with one question….how many of you have a toilet in your home that was built, and is maintained, by an international NGO?

The final point that I would like to discuss, and I think it is really at the crux of why multinational NGOs cannot be the primary players in the scale up of sanitation interventions in impoverished communities that are not their own, is the lack of cultural fluency and the inability or unwillingness to engage with local communities.  This factor is particularly evident in Haiti, a country that has been demonized for over 200 years as being a violent country, a country where people do not value the environment, a dirty country where hygiene is not a priority.  This is the perspective that most of the world has about Haiti, from reading about it in the international press.  In fact Haiti is none of these things; I feel safer in Haiti than I do in my own country, Haitian farmers have a deeper respect and understanding of the environment than most of the environmentalists that I went to school with, and I consistently find myself and my fellow NGO workers to be far less hygiene-conscious than the average Haitian.  This stereotype is not unique to Haiti and it is important to recognize the impact that stereotypes have on well meaning external interventions, in both emergency and development contexts.

Foreign NGO staff are usually briefed on the risks that they may encounter before they are shown the beauty of the country where they are working, they are forced to live in restricted areas, to ride around in cars with the windows up, and they are rarely given a chance to appreciate the resilience and generosity of the people they are working to serve.  Without interaction there cannot be trust and without trust there is no possibility of positive collaboration. 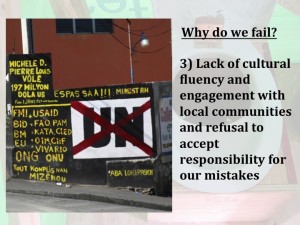 Speaking of trust, I would be remiss if I did not mention the elephant in the room, which is the source of Haiti’s cholera epidemic, the largest in recent global history, which has caused more than 8,000 deaths to date and sickened more than 1/6 of the country’s population. All evidence points to the cholera epidemic having started with a leaking UN septic tank at a Nepalese base in the Central Plateau.  Despite this mounting evidence from independent analysts, the UN has not yet accepted responsibility for the epidemic, heightening distrust of international organizations and leaving a scar on Haiti’s sanitation landscape that will haunt the country’s WASH sector for years to come.

The walls of fear, distrust, and misperception affect international interventions in all sectors, but are particularly disruptive to WASH interventions, where quick fixes are not possible and successful projects are completely dependent on community engagement.  You cannot engage respectfully with those you fear and you cannot honestly collaborate with those you lie to. So those of us who want to make a sustainable difference in a country that is not our own need to roll down our windows, learn to speak the local language, and fall in love with the people we are serving, not only the technology we are promoting.  And let’s take responsibility for our mistakes so that the communities in which we work will allow us the trust required for positive collaboration moving forward. 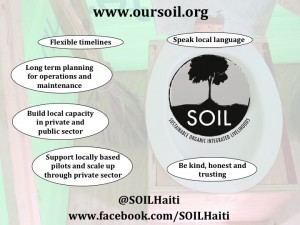 3 Replies to "Can NGOs be a Vehicle for Sustainable Sanitation? A Case Study from Haiti"