That’s right, our beloved Regional Director, Theo Huitema, has now officially become a shining example of our organizational mission to transform wastes into resources by building his home inside our old compost bins in Limonade, northern Haiti.

In January 2012, the mayor of Limonade asked SOIL to relocate our northern Haiti compost site in accordance with a new plan for the development of the region.  Although it was sad to leave behind our beautiful new compost bins, which had only been used for 4 months, we gladly obliged and have since established a new compost site on government land in the officially sanctioned waste treatment area. 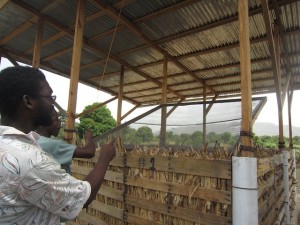 New compost site in Mouchinette. The new site was opened in early June 2012

Not wanting to waste all of the work that went into our old compost bins, Theo decided to transform them into a home/office.  Last weekend he officially moved into bins 1-3, with his bedroom butting up against the nearly decomposed compost in bins 4-6. Our oldest cement compost bins, constructed in 2009, have now been converted to fish ponds where the fish feast on algae grown with SOIL compost.

Now Theo is enjoying his new home in the center of our agricultural research station, where he can feast on delicious tilapia, spend his afternoons roaming the nurseries and experimental gardens and share a quiet moment with Huit the cow, Ti Konpos the guard god and Mr. Chankowsky the rabbit.

To see more photos of the amazing work in northern Haiti click here. 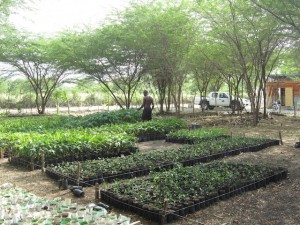 The nursery with the new house just behind it. 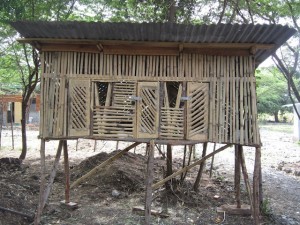 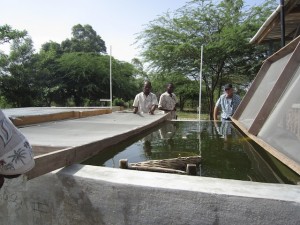 Theo and Agronom Romel show off the fish ponds

3 Replies to "SOIL’s Regional Director Moves Into a Compost Bin!"