The little bacteria that could

I attended Reed College, the same alma mater of SOIL’s executive director and co-founder, Sasha Kramer. Reed students celebrate “Nitrogen Day” every year because it is arguably one of the coolest elements on the periodic table.

One of the reasons why it’s a superstar element is that it’s essential to life: humans and other organisms need nitrogen to make amino acids, the building blocks of proteins, DNA, and RNA (pretty important stuff). And even though the air we breathe is mostly nitrogen (nitrogen gas makes up 78% of the atmosphere), our bodies can’t process it in that form. Instead, we need bacteria and plants to “fix” atmospheric nitrogen into a form that we can process.

Nitrogen-fixing bacteria transform nitrogen from its atmospheric form (N2) to nitrate (NO3). Nitrogen-fixers can be found in soil, water, and on the roots of legumes. Although double-atom nitrogen gas molecules are triple-bonded, making them really tough to get apart, these special bacteria can do it. Good work, bacteria! (Although my fellow “Reedies” celebrate nitrogen, I ask you: who is the real hero here? I would venture to say it’s the bacteria.)

Once the bacteria have transformed the nitrogen to nitrates, plants can absorb it and use the nitrogen to make proteins. When we eat plants, we break apart the plant proteins during digestion and rebuild our own proteins with the nitrogen. After digestion, excess nitrogen exits our bodies with pee and poop and bacteria break it down into ammonia. Some of the ammonia is reabsorbed by plants, the rest is converted to nitrates. The nitrates either stay in the soil or return to the atmosphere through a process called denitrification. 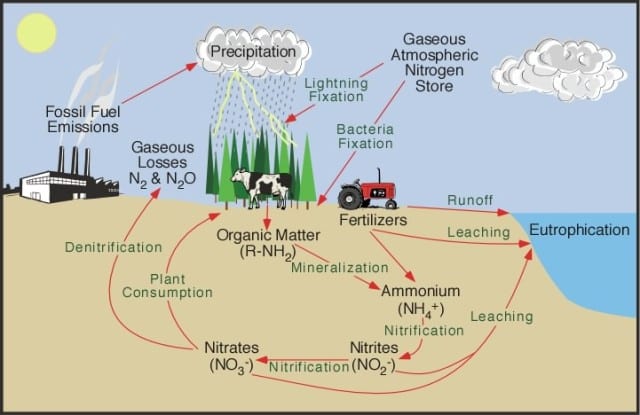 Like nitrogen, phosphorus is a cool element that is essential for living things. It can be found concentrated in rock beds that were once ocean floors, where living organisms died and sank to the bottom, leaving behind the phosphorus stored in their bodies. When the rock beds erode, phosphates dissolve into the water, becoming immediately available for plants, and eventually to the animals who eat those plants. When a plant or animal dies, pees, or poops, decomposing bacteria break it down release phosphates back into the soil and water.

Although we humans should be doing everything in our power to protect these vital elements, recent research published in the journal Science suggests that we are doing just the opposite. In fact, we’re nearing a “tipping point” in the disturbance of the global phosphorus/nitrogen cycle due to human activity. One such human activity is the overuse of chemical fertilizers. As we’ve seen, nitrogen and phosphorus are abundant but difficult to access, because the former needs to be converted into a useable form by special bacteria and the latter is locked away underground. So humans created synthetic fertilizers that make nitrogen and phosphorus readily available to plants to boost their yields. Unfortunately, these quantities are more than land and aquatic ecosystems can handle. This can lead to sudden algal blooms in fresh water, which produce toxins that can render water undrinkable and make people sick.

This huge global crisis in agricultural and freshwater systems is in large part why SOIL is so passionate about the capture and re-use of nutrients found in human waste. Why use precious fresh water resources to flush away nitrogen and phosphorus which, like the excess nutrients from chemical fertilizers, eventually end up polluting our waters? Especially when those heroic little bacteria are ready and waiting to do their important decomposition work so that plants, and then humans, can access those nutrients once again? The organic compost that SOIL produces through that decomposition process is not only rich in nutrients (in doses that the environment can handle), it also increases water retention so that less fresh water is used in agriculture, rebuilds topsoil (some scientists think that the globe only has 60 years of agricultural topsoil left), and holds carbon, which helps to mitigate climate change.

Voila! That is using ecological thinking to turn a problem into a resource. 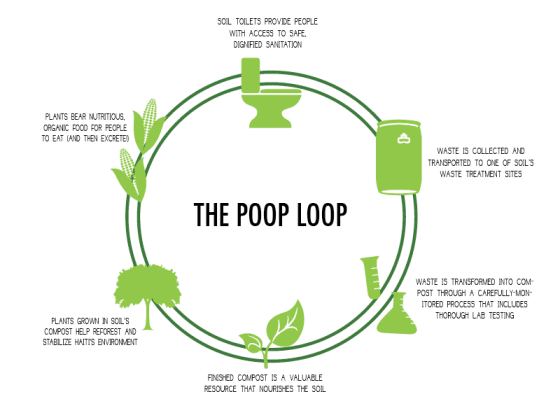 1 Reply to "The little bacteria that could"