The SOIL Weather Station: Data from Year One 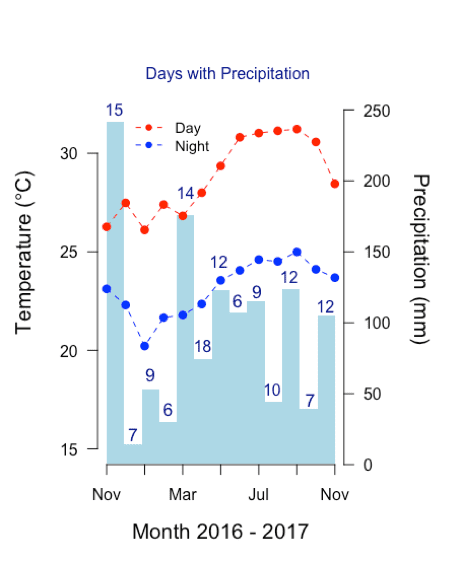 Temperatures reached an annual high of 36.1 °C (97.0 °F) at 12:19 PM on September 8, and dipped to a mild low of 14.4 °C (57.9 °F) at 6:29 AM on January 20. The consistently warm air temperatures Haiti experiences likely gives a little boost to the microbial transformation of waste to compost, which requires several weeks of temperatures above 55 °C, and may be an advantage of using ecological sanitation solutions in tropical locations.

Haiti also typically experiences a bi-modal rainfall pattern (two distinct wet seasons) as the sun and heaviest rainfall shifts north and south during the year. With the hot summer temperatures Haiti experiences, drier seasons bring local farmers the risk of soil desiccation and wind erosion, while the very heavy rains of the wet seasons can lead to top-soil erosion from surface water runoff.

This year we saw a typical dry season from December to February with those three months receiving < 50 mm (< 2 inches) rain, and we saw high monthly rainfall from March through September. However, if we look at the number of days that precipitation fell instead, we see that May, June, and July had fewer wet days. The wettest month of the year was our first month of data collection, November 2016, where we saw a rainfall total of 241 mm (9.5 inches). The wettest day was June 9 when 85 mm (almost 3.5 inches) of rain fell in one day, which was over 75% of that month’s rainfall total! 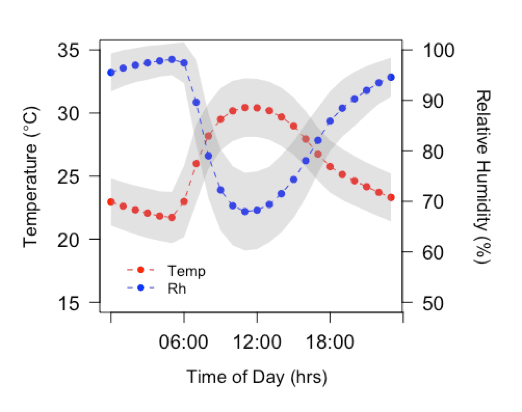 Northern coastal Haiti has a maritime climate that is strongly influenced by the moist air above the warm Atlantic Ocean. Even in the dry season, the ground at SOIL’s Cap-Haïtien composting site is often covered with heavy morning dew, which may be an important source of water for soils. The relative humidity data measured at the SOIL weather station shows why this dew forms most days. Relative humidity is expressed in percent, and is a measure of the amount of moisture the air is carrying relative to how much it can hold when totally saturated. Almost every morning between 4 a.m. and 6 a.m. (the lowest temperatures of the night) the relative humidity reached saturation (100%) which is the point at which water vapor condenses on solid surfaces forming liquid dew. 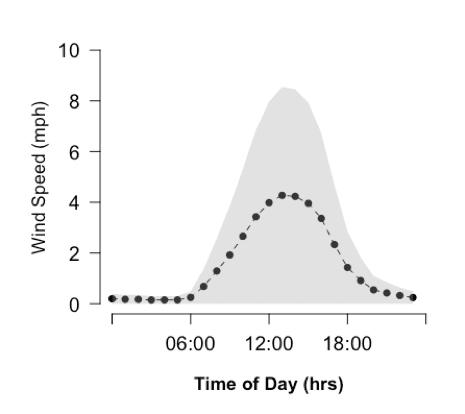 The dewy mornings at Mouchinèt also require the air to be pretty calm, and our anemometer data confirms that, with wind speed dropping to zero around dawn. By the afternoon anyone working at SOIL’s composting site also typically benefits from the strong onshore breeze that develops. The refreshing breezes on the north coast of Haiti develop because air rises convectively over the rapidly warming land and air is drawn in from the ocean to replace it. SOIL’s weather data also show a northeastern wind direction for more than a third of the year due to both these strong onshore breezes, and also because Haiti is in the path of the strong easterly trade winds that carry moisture and storms across the Atlantic to the Caribbean.

Fortunately, Haiti was spared a direct hit during the 2017 season, but SOIL’s weather station did pick up the classic signs a distant storm during the period of September 7-8, when Hurricane Irma, a category 5 storm, was a couple of hundred miles north of Cap-Haïtien. The wind speed dynamics for the day changed from the typical onshore-offshore breezes to a continuous increase in both steady wind and gust speeds. We also detected a significant drop in atmospheric pressure down to about 1000 mb and the peak wind speeds and lowest pressure coincided with some heavy rain, with about 1-1.5 cm (0.4-0.6 inches) of rain falling per hour at the highest rate.

Click Here to Return to the Blog about the Research

SOIL depends on individual donations from people like you to fund our work in Haiti. Please consider supporting SOIL today.

No Replies to "The SOIL Weather Station: Data from Year One"