By the United Nations Convention to Combat Desertification in the UNCCD News Issue 4.2/4.3, March-June 2012.

When confronted with two or more related challenges – let’s say from the fields of biodiversity and desertification – the ability to multi-task is often essential. But it’s difficult to imagine how sustainable land management and sanitation can be combined to create a win-win situation. The non-governmental organisation SOIL (Sustainable Organic Integrated Livelihoods) has managed this balancing act in Haiti, using compost gained through ecological sanitation to regenerate the country’s soils.

Meeting people’s daily food needs is one of the greatest and longstanding challenges for Haiti. Declining soil fertility and extensive soil erosion are resulting in low agricultural productivity and widespread poverty. When a massive earthquake hit the island in January 2010, the situation worsened dramatically. The country’s recovery is painfully slow. In order to meet the dietary needs of the rural population, in particular, over the long term, soil fertility urgently needs to be improved. 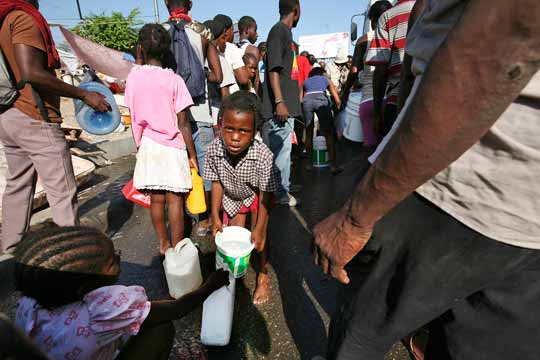 But it’s not just food insecurity that is putting people’s health at risk. Haiti also faces a sanitation crisis. The ocean, rivers, ravines, plastic bags, or abandoned houses are often the only way of disposing human waste. This was one of the main reasons for the cholera outbreak in late 2010, which quickly turned into an epidemic and claimed almost 7,000 lives.

Since 2006, SOIL has been addressing these issues, relying on an integrated approach to ecological sanitation (EcoSan). With specially designed toilet facilities, human waste is turned into safe, nutrient-rich compost that is well suited to regenerate depleted soils and improve agricultural production. This technology is not only environmentally sustainable; it is also affordable – a great asset in a country like Haiti.

More than 20,000 people in Haiti already use SOIL EcoSan toilets and many other similar sanitation facilities set up by other organisations with SOIL’s expertise. Waste treatment centres then collect all the waste products and process them into compost. It is crucial that the waste treatment facilities operate in accordance with the highest public health standards, according to Sasha Kramer, Executive Director of SOIL. The end product meets the users’ needs, with many farms, nurseries and gardens witnessing the positive effects on soil quality and yields. In its experimental gardens, SOIL is able to prove the quality of the compost, but it also tests and demonstrates other sustainable land management practices and cultivates seedlings for reforestation.

However, compost sales alone will not provide the financial security that the project needs because the current prices for compost do not cover the costs. But ”if compost sales are complemented by other potential revenue streams, such as private toilet collection and treatment fees, the full costs of providing ecological sanitation services are quickly covered,“ according to SOIL’s market analysis conducted in 2011.

Reaching out to the rural people and informing them about the EcoSan win-win approach is key for SOIL’s success. It has not only published the ”SOIL Guide to EcoSan“, but gives seminars and offers toilet tours for organisations, community groups and individuals. SOIL was a lead organiser in Haiti’s first Sustainable Sanitation Conference held in June 2012, another major milestone.
[box type=”shadow”] 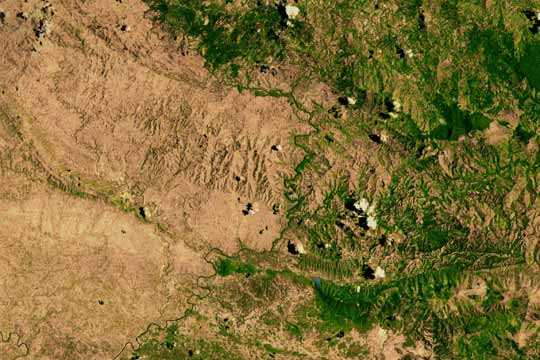 Satellite image showing deforestation in Haiti. This image depicts the border between Haiti (left) and the Dominican Republic (right).

What the Jury Says

“The project puts existing innovation to a wider use and connects it with research and policy formulation for soil regeneration.”

“SOIL is a particularly outstanding example of an organisation that has succeeded in conducting critical scientific research into soil regeneration while simultaneously engaging local communities and businesses in their innovative program designs. SOIL has achieved some incredible feats in Haiti.” Susan Poulton, Vice President, Digital Media, National Geographic Society, USA 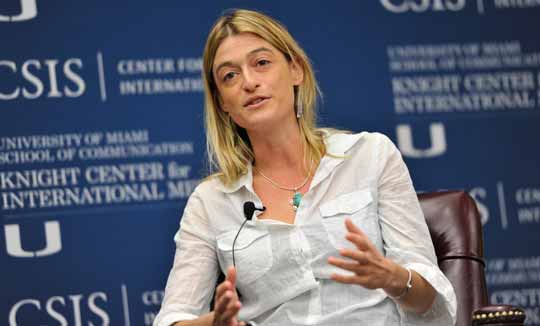 EcoSan is not a particularly common method of sustainable land management. How did you get the idea for the SOIL project? Was the approach EcoSan or soil-driven?

In nature, soil transforms organic matter, sustaining ecosystems by converting one organism’s wastes into another’s resources. It is from the soil that our organisation has borrowed both its name and its philosophy. In this sense, I would say that the ecological sanitation work that we do is driven by our desire to rebuild rich fertile soil, on an island that was once known as the Pearl of the Antilles and is now the most deforested country in the western hemisphere.

The decision to use ecological sanitation to achieve this goal was based on community feedback. When SOIL first started in Haiti, we ran seminars and training workshops on a range of different environmental technologies (water treatment, solar energy, sustainable agriculture techniques, etc) but improved sanitation quickly emerged as the most urgently needed intervention. And a sanitation solution that also treats wastes and produces rich, organic compost as a by-product is a perfect fit for Haiti.

Maintaining soil is the essence of sustainability from both an environmental and social perspective. The basic elements that make up living matter all come from, and return to, the soil.

How do local people react to SOIL’s activities and approach? Are they sceptical or enthusiastic, and do they feel a sense of ownership?

EcoSan is a new concept in Haiti. SOIL built Haiti’s first EcoSan toilet in 2006 and its first urban EcoSan composting waste treatment facility in 2009. SOIL builds toilets in communities that come to SOIL to request this technology rather than the other way around and from the beginning it’s been impossible to keep up with demand. Most significantly, SOIL’s first compost buyers were community organisations based in neighbourhoods with SOIL toilets – people knew it made sense!

In order to ensure that demand continues to grow and that this technology can scale up, almost 10 per cent of SOIL’s project activities are education and outreach programmes. The aim is to increase information sharing, promote scientific research and draw international attention to the importance of regenerating soil and improving sustainable land management practices in Haiti.

SOIL has been operating in Haiti since 2006. Which lessons have you learned so far?

SOIL has certainly experienced hundreds of small disasters since opening in 2006 and there have been a few dark moments where we thought that we would have to close our doors, but, just like Haiti, we pick ourselves up and come back stronger.

We live by the Haitian sayings painted on the back of the SOIL Poopmobile: “Pwoteje anviwonman an se pwoteje tet ou” (Protect the environment and you are protecting yourself) and “Chanjman tout bon an komanse nan mwen avan” (Change begins with me).

What were the greatest obstacles in the past and which obstacles do you see ahead of you?

Two of the biggest challenges that SOIL continues to face are cholera and lack of funding. It is unconscionable that just 1,000 kilometres from Miami, 7,000 people have died over the past two years from a preventable disease. And without access to complete sanitation – toilets and waste treatment – cholera will be in Haiti for a long time to come. However, sanitation is historically underfunded by donor agencies and Haiti has been a prime example of this.

Lack of funding for sanitation is one of the reasons why, prior to the earthquake, there was ZERO waste treatment in the country (with the exception of SOIL’s small composting site in northern Haiti, which has since grown considerably). Although there is now substantial funding to combat cholera, the majority of those funds go towards short-term water treatment interventions instead of addressing the root of the problem, which is poor sanitation.

How did the earthquake in 2010 affect your work?

Oxfam Great Britain approached SOIL about the possibility of using ecological sanitation toilets to address the growing sanitation crisis in the capital, but at first SOIL was very hesitant to do so because EcoSan had never been tested in emergency relief situations.

SOIL agreed to run a pilot project to build EcoSan toilets in camps for internally-displaced people around Port-au-Prince and develop decentralised composting waste treatment facilities. The outcome of this effort is better than we could ever have hoped for: SOIL’s low-cost and popular EcoSan toilets in Port-au-Prince following the 2010 earthquake provided clean and dignified sanitation access to over 20,000 earthquake victims and generated more than 300,000 gallons of compost for use in agriculture and sustainable land management.

Do you already have plans for the prize money?

SOIL will move to the next phase of our work, which is the valorisation of compost to rebuild damaged agricultural soils and reforest barren mountains. With the funds, we plan to work towards developing an integrated agricultural livelihood learning centre which will include a full-scale composting operation, fruit tree nursery, and solar-powered drip irrigation demonstration farm near Cap-Haïtien on the northern coast. 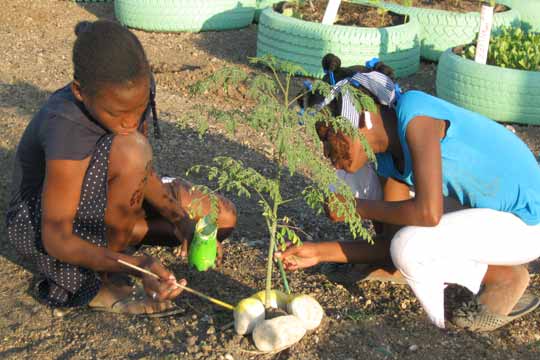 No Replies to "UNCCD News: Ecological Sanitation for Healthy Soils"