We've Got the Fever

If you follow news about Haiti, it will come as no surprise to you to hear that SOIL has got the fever – chikungunya fever, that is. The virus, transmitted by mosquitoes, has arrived in Haiti and is making headlines while making residents miserable. In addition to fever, the virus can cause a prickly rash as well as excruciating joint pain; the name chikungunya comes from an African word that means “contorted with pain,” and the Kreyol nickname for the disease, kraze le zo, translates to “crushed bones.” While chikungunya is much less dangerous than other mosquito-borne illnesses like malaria – deaths are extremely rare – there’s no treatment other than fluids, rest, and over-the-counter medicines for fever and pain, all of which feel woefully inadequate during the peak of symptoms.

Although the illness only recently arrived in the Caribbean, the first cases of chikungunya were documented back in the 1950s, and outbreaks have occurred in parts of Europe, Africa, Asia, and islands in the Indian and Pacific Oceans. According to the Centers for Disease Control, the first cases in the Caribbean were documented in late 2013, but it hasn’t taken long for it to wreak havoc here. Because people haven’t had any prior exposure to the virus, our immune systems are defenseless against this new invader, and the onset of the rainy season has only encouraged the growth of the mosquito population and sped chikungunya’s transmission around the country.

Indeed, for the past few weeks, chikungunya is the topic of conversation everywhere I go. Have you had it yet? How long were you down? Did you have the rash? Oh my gosh, the joint pain… Those of us who have had it share our war stories (at one point my ankles and feet hurt so badly that I crawled to the bathroom), while those who haven’t listen in with a mixture of dread and optimism, hoping against hope that by evading it for this long means they might just escape it altogether. 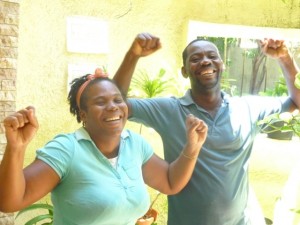 Sadly, SOIL has not been spared in this epidemic – all but two of our Port-au-Prince office staff have had it, or are currently suffering through it.  The good news is that everyone has recovered within a week without any lasting scars. For now, nou kanpe fò! We stay strong! Thank you for your expressions of concern and support, and we look forward to being back to our enthusiastic poop-composting, plant-growing selves soon!

3 Replies to "We've Got the Fever"