In case you somehow missed it on SOIL’s Facebook and Twitter feeds, last Wednesday was World Toilet Day! Started in 2001 by the World Toilet Organization to bring awareness to the global sanitation crisis,  the holiday has become a day of action in support of the 2.5 billion people worldwide who lack access to safe sanitation.

This year, SOIL was invited to celebrate World Toilet Day with OVIDHA (Organisation des Vidangeurs d’Haiti). OVIDHA is an organization of bayakou, sanitation workers who manually empty pit latrines, that was created in 2010 to destigmatize and promote respect for their profession. As we’ve written in previous blog posts, the nature of bayakous’ work has long been a source of discrimination against them; most bayakou work in the middle of night for this reason. In a recent meeting with a group of bayakou working in Cap-Haitien, they told stories of being attacked – people throwing rocks at them, destroying their equipment, even attempting to set a worker on fire – when discovered. 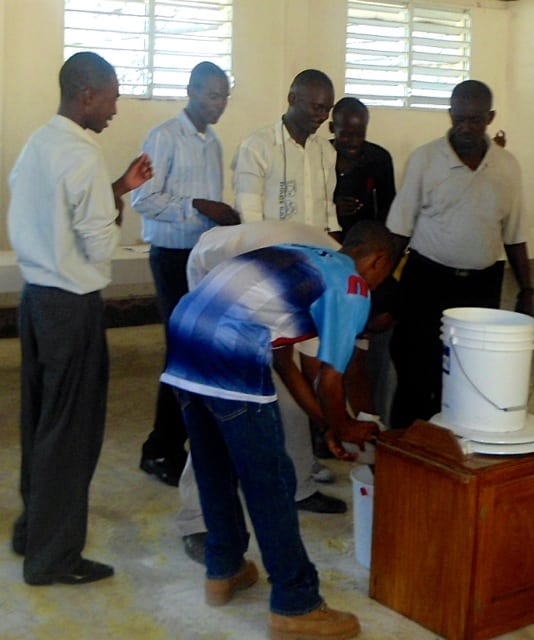 Participants gather round to check out SOIL’s demonstration toilet and handwashing materials.

We dispatched several members of Port-au-Prince’s Sanitation Department, who presented on a variety of topics including the science of ecological sanitation, safe waste handling and treatment practices, and healthy hygiene. In addition, they explained SOIL’s history as an organization and the work that we do in Haiti.

The 26 bayakou in attendance were enthusiastic participants and thoroughly enjoyed the workshop. As one attendee explained, “Bayakou in our association have often felt that we’re all on our own, but now we’re coming to see that there are people and organizations that appreciate the work that we’re doing and are ready to come alongside of us… When you compare SOIL’s training to the others we’ve done, I felt like SOIL led this workshop with their whole hearts.” Another said, “This workshop will allow us to perform better, more professionally and at a higher level of quality, in the work that we do.”

From our point of view, we’re proud to support a group of men and women dedicated to bettering their profession to protect the health of the communities they serve. Thanks OVIDHA for a great World Toilet Day!

No Replies to "Whole-hearted Support for Safe Sanitation!"