Yale Climate Connections: As the planet warms, can we afford to treat poop as waste?

For centuries, people have been using human waste as a precious commodity for soil fertilization around the world. In fact, night soil, the term given to the human waste product, has had entire economies built around it as a means for sustainable agriculture production from Asia to the Amazon. A recent article in Yale Climate Connections provided some insight into understanding why we have wandered so far from these roots, how that has impacted climate change, and if it is time once again to rethink human waste as a valuable commodity.

Prior to World War II, livestock manure management was an integral part of soil health and agricultural production. According to the article, “Agriculture’s shift away from manure has roots in World War II, with a dramatic spike in the production of nitrogen – a key ingredient in both explosives and fertilizer. After the war ended, the government turned its attention to feeding a growing population. Generous state funding for research into chemical fertilizer set the stage for widespread adoption. In the post-WWII period, farmers used approximately 2 million tons of chemical fertilizer each year; by 2014, this figure had risen tenfold.”

Human waste has followed a similar “resource to waste trajectory”, with both shifts having a problematic impact on climate change.  With the move to chemical fertilizer production, manure has largely become a waste product; and in the case of dairy farms it is redirected to manure lagoons that release large amounts of methane. Similarly, our modern sanitation systems of “flush and forget” emit greenhouse gases through anaerobic (no oxygen present) decomposition, as well indirect emissions, including “those generated by the fossil fuels burned to power energy-intensive sewer infrastructure and produce the chemical fertilizers used in lieu of excreta-based crop nutrients.” Not to mention the complete loss of recyclable nutrients existing in human and animal waste, and the impact on water resources required for our modern sanitation systems.

The SOIL team has spent more than a decade in Haiti researching and working through some of these issues to create an ecologically responsible approach to sustainable sanitation in urban communities most vulnerable to the impacts of climate change, natural disasters, and groundwater contamination. “In a country where inadequate sanitation played a key role in a deadly cholera outbreak, SOIL has developed and deployed more than 1,000 waterless, container-based household toilets specially designed to prevent leakage and contamination during floods and other disasters. 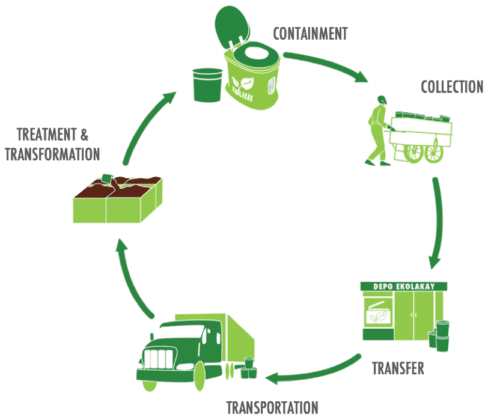 Each week, the containers are collected by SOIL staff, a system that creates stable jobs in the local community and avoids households needing to handle their own excreta. The waste is then brought to a treatment facility where contents are transformed into compost through a natural process that relies on heat-loving microbes. This compost is then applied to agricultural fields or used in soil restoration projects.”

SOIL, as well as fellow members of the Container Based Sanitation Alliance (CBSA), are leading the way and showing the world how to not only tackle the urban sanitation crisis, but revitalize waste as a valuable commodity while responding to tough environmental challenges.

Click here to read the original article and learn more about how SOIL and CBSA practitioners are working to spark the conversation around sanitation and climate mitigation.

No Replies to "Yale Climate Connections: As the planet warms, can we afford to treat poop as waste?"