World Cup fever has hit Haiti, and futbol is the subject of conversation everywhere you go. SOIL decided on a recent Friday afternoon to get it in on the fun!

It was a match to remember: the SOIL staff against the local champions from the town of Dubout. The field was ready and the teams were chosen. The opposing team arrived with their championship trophy in hand. They looked impressive, and it seemed a tall order to compete with such skill.

But the SOIL team had heart and spirit, and as the match commenced, we cheered from the sidelines, along with community members who came to watch and enjoy the day.  Each department from SOIL – Sanitation, Agriculture, Technical and Administration – had their key players. The game was played with intensity and excitement, but in the end it came down to penalty kicks. The crowd was roaring as the final players were chosen to take a shot at scoring.

One by one, each team sent their players. It was tied 3-3, with Dorat, a member of SOIL’s Sanitation department, the last to shoot. Chants of “SOIL! SOIL!” rang out on to the field as Dorat’s kick sent the ball sailing into the goal!

Staff, friends and family poured onto the field. The trophy was handed over as we took victory laps around the field, kids cheering and jumping, staff hugging and high-fiving. What a day, what a great match, and what a great team SOIL has! 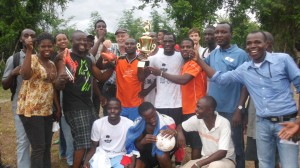 No Replies to "Futbol Fever!"