Her name is Joachim Gracius Philomene, but everyone knows her as Madame Bwa, or just Manman (the Creole word for “mother”). But no matter what you call her, the Ambasadris of SOIL North Haiti plays a crucial role in our work. Since the inception of SOIL in 2006, she has been spreading the word and helping change the health and sanitation of families throughout Cap-Haitien.

She is met with respect and gratitude wherever she goes, and her word goes far with young and old alike. Madame Bwa is an inspirational community organizer in the neighborhood of Shada II, where she has lived for 36 years with her 4 children and 8 grandchildren. Many of our readers will be familiar with Shada II, an informal community on the outskirts of Cap Haitien, which is home to over 1,600 families, covering about 2.5 square kilometers of land along the river. 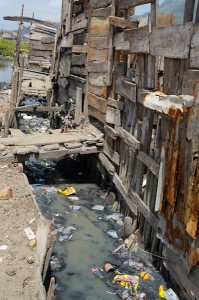 One of the many challenges faced in Shada are the canals which often flood and serve as breeding grounds for disease.

Although Shada is now one of the most densely populated communities in Haiti, when Madame Bwa first moved there in 1978 there were only 3 other houses, and the canals which are now breeding grounds for mosquitoes were still untouched mangrove groves filled with crabs and fish and even flamingos! Over the past 3 decades Madame Bwa has watched the population in Shada skyrocket as people flow in from the countryside in search of work and access to schools and hospitals. As the population has increased so too have the challenges, and the water that was once a source of life has become a dangerous threat to public health. With so many people living in close proximity, lack of sanitation has become one of the leading causes of disease in Shada and cholera rates in this community were much higher than the surrounding areas.

It was this very sanitation challenge that brought Madame Bwa and SOIL together in 2006 to work on combatting this problem at its roots through the construction of toilets that remove pathogens from the community. SOIL now has 3 public toilet blocks and over 100 household toilets in Shada serving over 2,000 people.

Much of SOIL’s success in Shada can be attributed to Madame Bwa’s passionate outreach and organizing, earning her the special title of SOIL Ambasadris, our ambassador to the community. Her title comes not only from her work with SOIL but from her many years of working in the community on projects that range from health to livelihoods. A comprehensive list of Madame Bwa’s accomplishments could fill a book, but here are just a few of the amazing things that she has done in her 36 years in Shada that have earned her the respect of her neighbors: 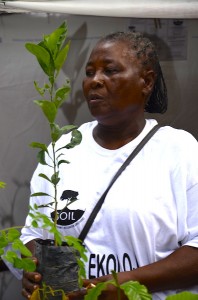 Madame Bwa planting a tree in Shada from SOIL’s nursery.

And, with the exception of her work with SOIL, almost all of this has been done on a volunteer basis. Although she’s nearly 70, Madame Bwa shows no signs of slowing down: “The community has come a long way – but it still has a ways to go.”

We salute the work of Madame Bwa and are so very lucky to have her as a part of our team! 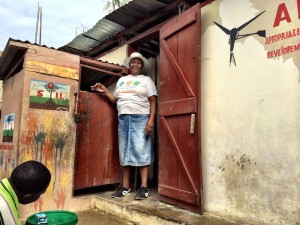 Madame Bwa standing in the doorway of one of SOIL’s public toilets built in 2007.

No Replies to "Our Ambasadris "