“Little by little the bird makes its nest.” –Haitian Proverb

Last month marked the four-year anniversary of the earthquake that devastated Haiti. Since January 12, 2010, SOIL has provided emergency sanitation services for over 20,000 displaced people. Over the past four years, SOIL has been privileged to witness the closing of many of the tent cities we service as people have found or built permanent homes. SOIL’s emergency sanitation program is now working in only six tent camp communities in Port-au-Prince where we serve approximately 3,500 people. In the Shada neighborhood of Cap Haitien, an area that is extremely vulnerable to water-borne disease and cholera, SOIL provides emergency sanitation for an additional 3,000 people. 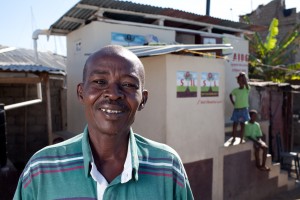 In many ways, SOIL’s emergency sanitation program has helped with the design and success of our current social business pilot. SOIL’s experience providing emergency sanitation services has afforded us many lessons, and we have used what we’ve learned over the years to refine our toilet designs and improve our maintenance operations. SOIL’s emergency sanitation program has also increased demand for EcoSan toilets in Haiti. SOIL’s public toilets in the tent cities are known for being some of the cleanest, most hygienic toilets in the country.  We know this is a rare thing to say about public toilets, but it’s true! Our SOIL public toilet managers and staff have kept the toilets sparkling clean over the years, and the EcoSan toilets are so desirable that SOIL’s friends and visitors have been known to go out of their way to use SOIL’s public toilets when out in the city. As a true testament to the success of this 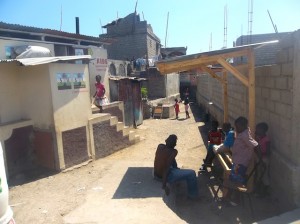 emergency effort, former residents of tent settlement frequently ask our employees if they can continue to have a SOIL toilet once they leave the camps. People like the simplicity, cleanliness, and sustainable nature of SOIL’s EcoSan toilets.

In a landscape dotted with abandoned projects and in an atmosphere defined by empty promises and deflated expectations, people appreciate SOIL’s reliability. We believe that your support of SOIL’s emergency sanitation program has not only helped us to maintain critical emergency services in some of the country’s most vulnerable communities, but that it has also helped SOIL to expand the realm of possibilities for sustainable sanitation in Haiti. Thank you for your continued support of this important project, and for aiding SOIL’s transition from emergency to household toilets.