Fantastic news from the experimental garden at Pernier: A batch of cabbages came in last week, some grown with SOIL compost, some without. The cabbages grown without compost looked perfectly fine, but the SOIL compost cabbages looked magnificent!

Everyone in the office was excited to see the results of such a successful agricultural trial, and immediately set about quantifying the differences between the two experimental crops.
The ‘With Compost’ patch yielded 14 cabbages, with an average weight of 1.3 kilograms. The ‘Without Compost’ patch yielded just 4 cabbages, weighing an average 0.6 kilograms. The power of compost prevails! 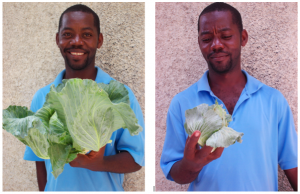 SOIL agronomist Jean Marie Noel compares two of the cabbages. The cabbage grown with compost is making him smile! 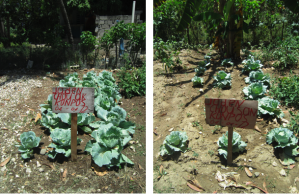 After weighing and counting all of the cabbages, we celebrated by cooking some of them up and sharing a snack–they were delicious!

Enjoying a bowl of cabbage grown with SOIL compost. 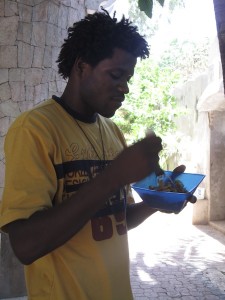 Yummy cabbage for everyone!